Death of a Salesman Paper 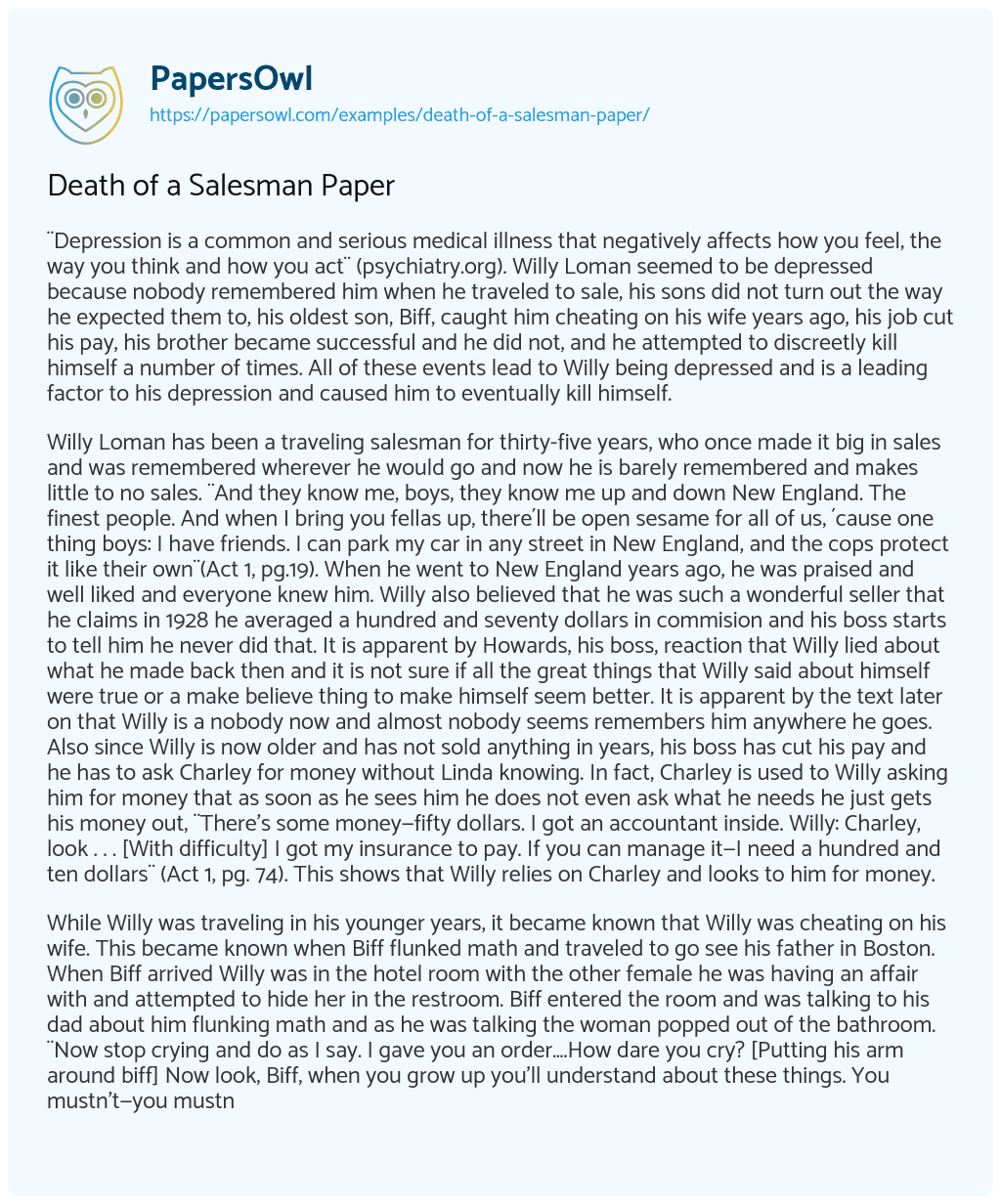 ¨Depression is a common and serious medical illness that negatively affects how you feel, the way you think and how you act¨ (psychiatry.org). Willy Loman seemed to be depressed because nobody remembered him when he traveled to sale, his sons did not turn out the way he expected them to, his oldest son, Biff, caught him cheating on his wife years ago, his job cut his pay, his brother became successful and he did not, and he attempted to discreetly kill himself a number of times. All of these events lead to Willy being depressed and is a leading factor to his depression and caused him to eventually kill himself.

Willy Loman has been a traveling salesman for thirty-five years, who once made it big in sales and was remembered wherever he would go and now he is barely remembered and makes little to no sales. ¨And they know me, boys, they know me up and down New England. The finest people. And when I bring you fellas up, there´ll be open sesame for all of us, ´cause one thing boys: I have friends. I can park my car in any street in New England, and the cops protect it like their own¨(Act 1, pg.19). When he went to New England years ago, he was praised and well liked and everyone knew him. Willy also believed that he was such a wonderful seller that he claims in 1928 he averaged a hundred and seventy dollars in commision and his boss starts to tell him he never did that. It is apparent by Howards, his boss, reaction that Willy lied about what he made back then and it is not sure if all the great things that Willy said about himself were true or a make believe thing to make himself seem better. It is apparent by the text later on that Willy is a nobody now and almost nobody seems remembers him anywhere he goes. Also since Willy is now older and has not sold anything in years, his boss has cut his pay and he has to ask Charley for money without Linda knowing. In fact, Charley is used to Willy asking him for money that as soon as he sees him he does not even ask what he needs he just gets his money out, ¨There’s some money—fifty dollars. I got an accountant inside. Willy: Charley, look . . . [With difficulty] I got my insurance to pay. If you can manage it—I need a hundred and ten dollars¨ (Act 1, pg. 74). This shows that Willy relies on Charley and looks to him for money.

While Willy was traveling in his younger years, it became known that Willy was cheating on his wife. This became known when Biff flunked math and traveled to go see his father in Boston. When Biff arrived Willy was in the hotel room with the other female he was having an affair with and attempted to hide her in the restroom. Biff entered the room and was talking to his dad about him flunking math and as he was talking the woman popped out of the bathroom. ¨Now stop crying and do as I say. I gave you an order….How dare you cry? [Putting his arm around biff] Now look, Biff, when you grow up you’ll understand about these things. You mustn’t—you mustn’t overemphasize a thing like this. I’ll see Birnbaum first thing in the morning. Biff: Never mind. Willy [getting down beside biff]: Never mind! He’s going to give you those points. I’ll see to it.¨ (Act 2, pg. 94 and 95). After this moment, the affair ended and Biff never looked at his father the same way and he even told his mother that Willy has never had respect for her and never explains what he means. Biff starts to disappear and when he is around he gets into heated arguments with his dad. Around this time in the 1940´s according to the statistics ¨Americans born in the 1940s and 1950s reported the highest rates of extramarital sex, perhaps because they were the first generations to come of age during the sexual revolution¨ (Who Cheats More?, paragraph 6). To Willy, it seemed okay for him to cheat on his wife without any cares. ¨A person’s political identity, family background, and religious activity are also related to whether or not they cheat¨ (Who Cheats More?, paragraph 8). Since Willy did not grow up with his father around, this can also be a reason that he began cheating on his wife since he had a ¨broken¨ family. This is a cause for him to be depressed because Biff thought the world of him and after this he lost all respect for him, Willy also had to stop seeing the other woman because he feared for his wife finding out after Biff caught them together.

It became incredibly clear that Willy was trying to kill himself after he had gotten into multiple car accidents and even bit into a gas pipe. ¨The insurance inspector came. He said that they have evidence. That all these accidents in the last year— weren’t—weren’t—accidents¨ (Act 1, pg. 42). ¨And sure enough, on the bottom of the water heater there’s a new little nipple on the gas pipe¨(Act 1, pg. 43). Willy did these things to try to end his life to get money from the insurance company for his family since they were struggling. Also Willy seemed to be depressed because symptoms of depression is, ¨Feeling sad or having a depressed mood, trouble sleeping or sleeping too much, loss of energy or increased fatigue, feeling worthless or guilty, difficulty thinking, concentrating or making decisions, and thoughts of death or suicide¨ (What is Depression?, paragraph 2). It is stated on page 3 that, ¨Willy: No, it’s me, it’s me. Suddenly I realize I’m goin’ sixty miles an hour and I don’t remember the last five minutes. I’m—I can’t seem to—keep my mind to it.¨ , this relates to him being depressed because he could not concentrate when he was driving and he even had to go back home because of it. These ¨suicide attempts¨ led to Willy actually killing himself in the end. He eventually ends up getting in his car one night and leads himself to his death. This could definitely be the factor of him being depressed, since he died in the end.

Willy was only a sixty-three year old man who just wanted the best for his family. He just so happened to develop the symptoms of depression as he got older and reflected on what he could have done differently. He became forgotten, his sons seemed to hate him, and his job was not ideal for him in his old age. Willy was depressed and he seemed to have every reason to be.”

Death of a Salesman Paper. (2021, Jul 03). Retrieved from https://papersowl.com/examples/death-of-a-salesman-paper/

Movie “The Death of a Salesman”