Perception of Reality in Death of a Salesman 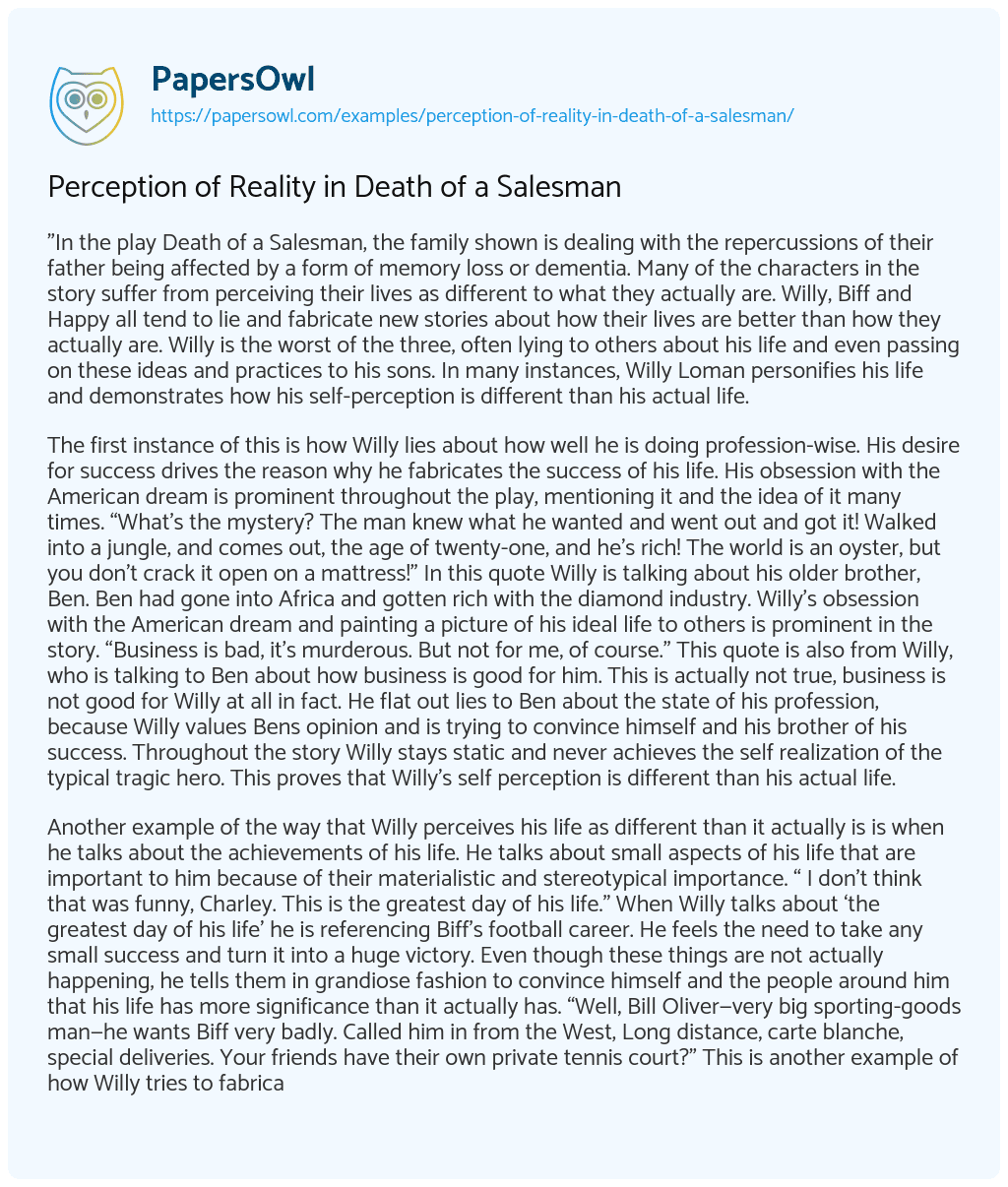 “In the play Death of a Salesman, the family shown is dealing with the repercussions of their father being affected by a form of memory loss or dementia. Many of the characters in the story suffer from perceiving their lives as different to what they actually are. Willy, Biff and Happy all tend to lie and fabricate new stories about how their lives are better than how they actually are. Willy is the worst of the three, often lying to others about his life and even passing on these ideas and practices to his sons. In many instances, Willy Loman personifies his life and demonstrates how his self-perception is different than his actual life.

The first instance of this is how Willy lies about how well he is doing profession-wise. His desire for success drives the reason why he fabricates the success of his life. His obsession with the American dream is prominent throughout the play, mentioning it and the idea of it many times. “What’s the mystery? The man knew what he wanted and went out and got it! Walked into a jungle, and comes out, the age of twenty-one, and he’s rich! The world is an oyster, but you don’t crack it open on a mattress!” In this quote Willy is talking about his older brother, Ben. Ben had gone into Africa and gotten rich with the diamond industry. Willy’s obsession with the American dream and painting a picture of his ideal life to others is prominent in the story. “Business is bad, it’s murderous. But not for me, of course.” This quote is also from Willy, who is talking to Ben about how business is good for him. This is actually not true, business is not good for Willy at all in fact. He flat out lies to Ben about the state of his profession, because Willy values Bens opinion and is trying to convince himself and his brother of his success. Throughout the story Willy stays static and never achieves the self realization of the typical tragic hero. This proves that Willy’s self perception is different than his actual life.

Another example of the way that Willy perceives his life as different than it actually is is when he talks about the achievements of his life. He talks about small aspects of his life that are important to him because of their materialistic and stereotypical importance. “ I don’t think that was funny, Charley. This is the greatest day of his life.” When Willy talks about ‘the greatest day of his life’ he is referencing Biff’s football career. He feels the need to take any small success and turn it into a huge victory. Even though these things are not actually happening, he tells them in grandiose fashion to convince himself and the people around him that his life has more significance than it actually has. “Well, Bill Oliver—very big sporting-goods man—he wants Biff very badly. Called him in from the West, Long distance, carte blanche, special deliveries. Your friends have their own private tennis court?” This is another example of how Willy tries to fabricate a better life for himself and his current reality. To impress Bernard, he paints Biff as a successful businessman instead of just telling him who he really is. Willy continues to prove throughout the story that he perceives his life differently than what it actually is.

Willy, Biff and Happy all tend to lie and fabricate new stories about how their lives are better than how they actually are. Willy is the worst of the three, often lying to others about his life and even passing on these ideas and practices to his sons. Continuously throughout the play, Willy demonstrates that he really never sees how his life towards the end. At the end of the story, he finally realizes and accepts that his life is truly not what he perceives. Willy gains true self awareness and realizes that he is not the successful businessman and neither are his sons.”

Perception of Reality in Death of a Salesman. (2021, May 24). Retrieved from https://papersowl.com/examples/perception-of-reality-in-death-of-a-salesman/