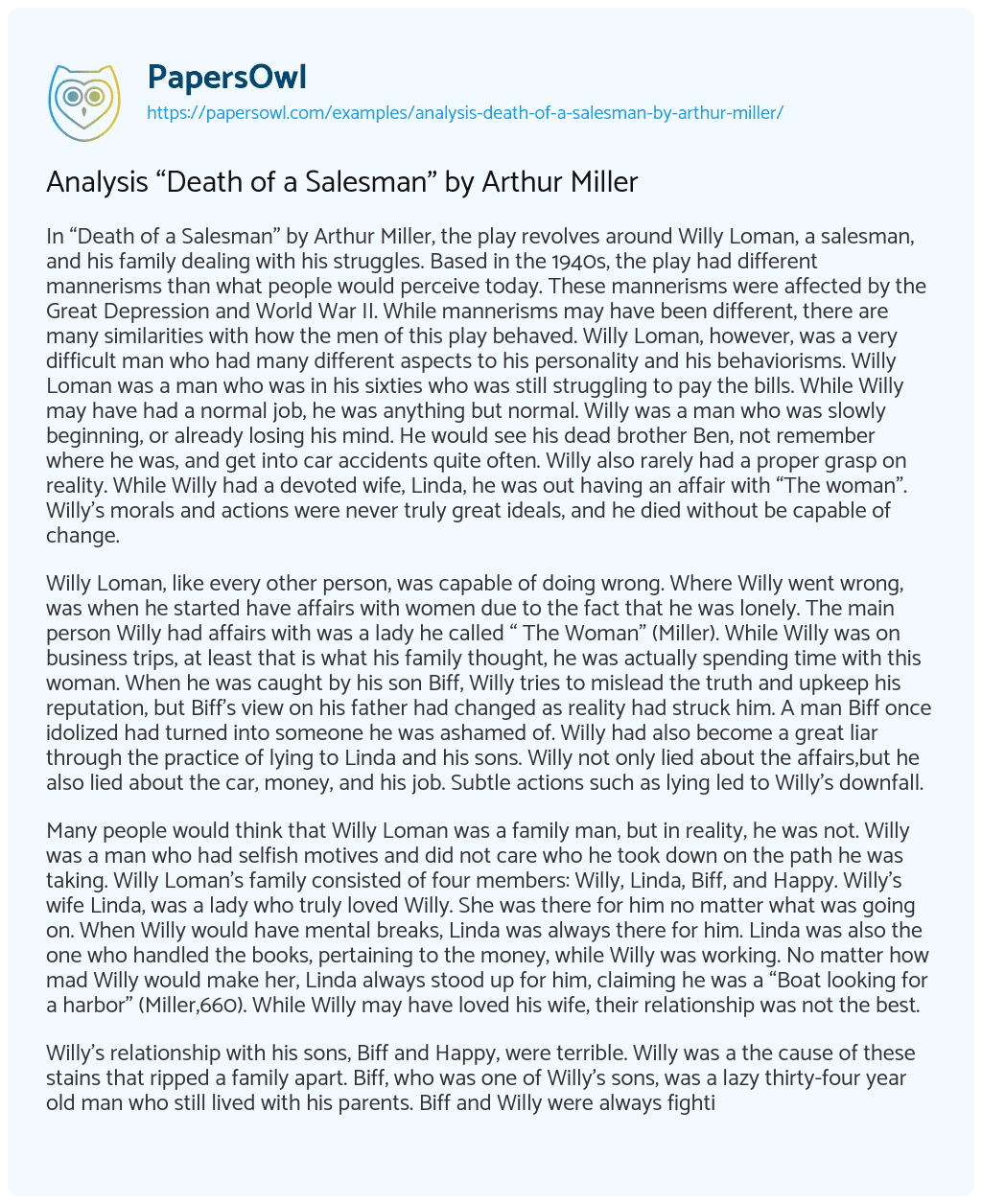 In “Death of a Salesman” by Arthur Miller, the play revolves around Willy Loman, a salesman, and his family dealing with his struggles. Based in the 1940s, the play had different mannerisms than what people would perceive today. These mannerisms were affected by the Great Depression and World War II. While mannerisms may have been different, there are many similarities with how the men of this play behaved. Willy Loman, however, was a very difficult man who had many different aspects to his personality and his behaviorisms. Willy Loman was a man who was in his sixties who was still struggling to pay the bills. While Willy may have had a normal job, he was anything but normal. Willy was a man who was slowly beginning, or already losing his mind. He would see his dead brother Ben, not remember where he was, and get into car accidents quite often. Willy also rarely had a proper grasp on reality. While Willy had a devoted wife, Linda, he was out having an affair with “The woman”. Willy’s morals and actions were never truly great ideals, and he died without be capable of change.

Willy Loman, like every other person, was capable of doing wrong. Where Willy went wrong, was when he started have affairs with women due to the fact that he was lonely. The main person Willy had affairs with was a lady he called “ The Woman” (Miller). While Willy was on business trips, at least that is what his family thought, he was actually spending time with this woman. When he was caught by his son Biff, Willy tries to mislead the truth and upkeep his reputation, but Biff’s view on his father had changed as reality had struck him. A man Biff once idolized had turned into someone he was ashamed of. Willy had also become a great liar through the practice of lying to Linda and his sons. Willy not only lied about the affairs,but he also lied about the car, money, and his job. Subtle actions such as lying led to Willy’s downfall.

Many people would think that Willy Loman was a family man, but in reality, he was not. Willy was a man who had selfish motives and did not care who he took down on the path he was taking. Willy Loman’s family consisted of four members: Willy, Linda, Biff, and Happy. Willy’s wife Linda, was a lady who truly loved Willy. She was there for him no matter what was going on. When Willy would have mental breaks, Linda was always there for him. Linda was also the one who handled the books, pertaining to the money, while Willy was working. No matter how mad Willy would make her, Linda always stood up for him, claiming he was a “Boat looking for a harbor” (Miller,660). While Willy may have loved his wife, their relationship was not the best.

Willy’s relationship with his sons, Biff and Happy, were terrible. Willy was a the cause of these stains that ripped a family apart. Biff, who was one of Willy’s sons, was a lazy thirty-four year old man who still lived with his parents. Biff and Willy were always fighting like cats and dogs, never agreeing on anything. Biff was one of the few people who knew about Willy cheating on Linda, as he was the one who walked in on his father and the woman at the hotel. Biff blames Willy for him ending up in jail for stealing, claiming that him walking in on his father cheating messed him up. Happy Loman was Willy’s youngest son who at 32, had a job, but still lived with his parents. Happy was oblivious to Willy’s infidelity, and continued to stay on his father’s side until Willy’s death. Willy’s family, which may seem abnormal from a quick view, had one of the most common family dynamics.

Willy had a older brother, who was called throughout the play, Uncle Ben. Ben was claimed to move to Alaska, but in reality, he moved to Africa due to a wrong turn. Ben was also into the diamond industry, where he got most of his wealth. Most of the diamonds in Africa, however, were blood diamonds, which are illegal. Ben, when he was alive, offered Willy multiple times a job in Alaska. Willy’s stubbornness and ego, however, got in the way and he did not take the job. In the middle of the play, the readers find out that Ben is dead, and that Willy only sees him in flashbacks and memories.

Willy’s actions not only affected his family, but also the people around him. Throughout the novel, readers could sense the tension between Willy and his neighbor Charley. Willy constantly let his jealousy and envy of Charley have control of his actions, which led to many altercations between the two men. Not only did Willy let his jealousy and envy control his actions, but he also let his ego affect how his relationships with the people around him, especially when Charley offers Willy a job for “…fifty dollars a week”(Miller,673). Bernard, who is Charley’s son, was a successful lawyer who was friends with Willy’s sons. Bernard was also the one who helped Willy’s son, Biff, with school in order for Biff to pass. When Bernard is with his father and Willy joins them, Willy criticizes and argues with Bernard, not knowing that the boy had a case in Washington DC, “No! The Supreme Court”, even though people knew of Bernard’s success, Willy was oblivious until he heard of the case (Miller,672).

Willy, throughout the play, expressed how weak his mental state was. Near the middle of the novel, the readers find out that Willy was suicidal. Willy wrecking the car multiple times were not accidents, but attempts to end his life. Everyone in his family were oblivious to his pain, and they thought that everything was going fine with Willy. Willy, however, is starting to lose his mind and go insane. This insanity led to Willy’s ultimate downfall. Willy, at the end of the play, goes so insane that he ends of dying in his home with his family upstairs. Willy died before even getting to change his morals and behaviors. He may have found out that Biff never hated him, but he still let the thought of his hatred contribute to his death. Willy let the small things get to him, which was the ultimate cause of his demise.

Analysis “Death of a Salesman” by Arthur Miller. (2021, Jul 05). Retrieved from https://papersowl.com/examples/analysis-death-of-a-salesman-by-arthur-miller/

Arthur Miller’s Death of a Salesman