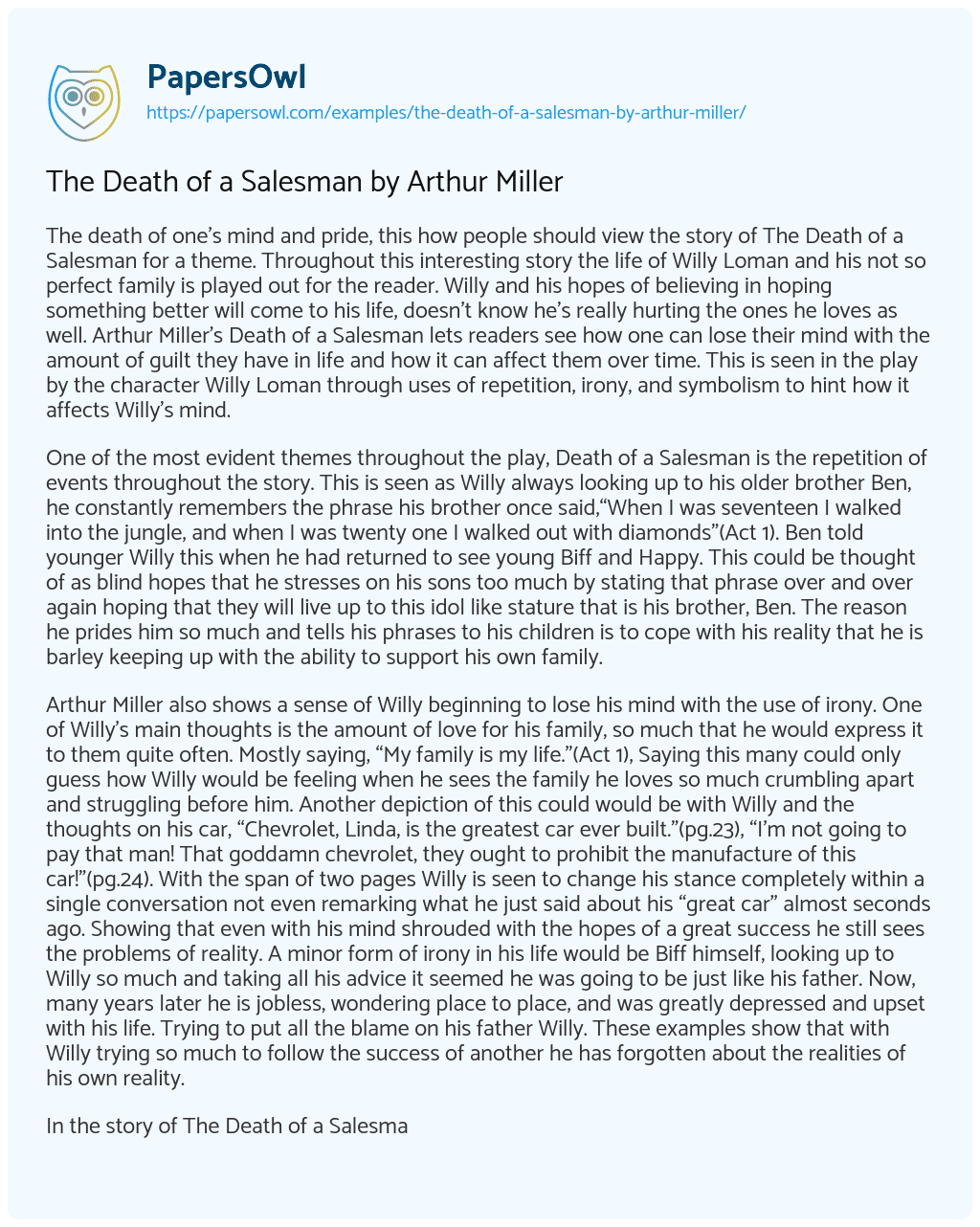 The death of one’s mind and pride, this how people should view the story of The Death of a Salesman for a theme. Throughout this interesting story the life of Willy Loman and his not so perfect family is played out for the reader. Willy and his hopes of believing in hoping something better will come to his life, doesn’t know he’s really hurting the ones he loves as well. Arthur Miller’s Death of a Salesman lets readers see how one can lose their mind with the amount of guilt they have in life and how it can affect them over time. This is seen in the play by the character Willy Loman through uses of repetition, irony, and symbolism to hint how it affects Willy’s mind.

One of the most evident themes throughout the play, Death of a Salesman is the repetition of events throughout the story. This is seen as Willy always looking up to his older brother Ben, he constantly remembers the phrase his brother once said,“When I was seventeen I walked into the jungle, and when I was twenty one I walked out with diamonds”(Act 1). Ben told younger Willy this when he had returned to see young Biff and Happy. This could be thought of as blind hopes that he stresses on his sons too much by stating that phrase over and over again hoping that they will live up to this idol like stature that is his brother, Ben. The reason he prides him so much and tells his phrases to his children is to cope with his reality that he is barley keeping up with the ability to support his own family.

Arthur Miller also shows a sense of Willy beginning to lose his mind with the use of irony. One of Willy’s main thoughts is the amount of love for his family, so much that he would express it to them quite often. Mostly saying, “My family is my life.”(Act 1), Saying this many could only guess how Willy would be feeling when he sees the family he loves so much crumbling apart and struggling before him. Another depiction of this could would be with Willy and the thoughts on his car, “Chevrolet, Linda, is the greatest car ever built.”(pg.23), “I’m not going to pay that man! That goddamn chevrolet, they ought to prohibit the manufacture of this car!”(pg.24). With the span of two pages Willy is seen to change his stance completely within a single conversation not even remarking what he just said about his “great car” almost seconds ago. Showing that even with his mind shrouded with the hopes of a great success he still sees the problems of reality. A minor form of irony in his life would be Biff himself, looking up to Willy so much and taking all his advice it seemed he was going to be just like his father. Now, many years later he is jobless, wondering place to place, and was greatly depressed and upset with his life. Trying to put all the blame on his father Willy. These examples show that with Willy trying so much to follow the success of another he has forgotten about the realities of his own reality.

In the story of The Death of a Salesman Arthur Miller also uses symbolism as memories of Willy’s that have scared him mentally. One of these symbols would be, “Diamonds in the jungle”(Act 1). To Willy this phrase would always give him the hope of a chance to make it, Though Ben warns him, “The jungle is dark but full of diamonds”(Act 1). This meaning to Willy that there are ways to become successful but there can also be dangers and hardships throughout his quest to becoming wealthy. Willy also seems to have a problem with Linda’s stockings, he would despise them so much as to say,“I won’t have you mending stockings in this house! Throw them out now!”(Act 1). With this new wonder it is soon learned that Willy was once giving Linda’s stockings away to another woman he was having an affair with. With this, and later in time Biff finding out about his affair. Willy feels shame and disgust that he has been giving these stockings away and also instead of working and providing for his family he was actually away with another woman. When someone has guilt it puts a stress on the body, the feeling of knowing that you are wrong and have made a mistake in the past. But if they are not rectified one can become overwhelmed with guilt and it can affect you mentally over time.

Author Arthur Miller uses Irony, Symbolism, and repetition to show how someone trying to hide so much guilt with blind beliefs Can damage themselves mentally over time. Each giving multiple examples to how the decisions Willy has made as a person has affected who he was in the present.

The Death of a Salesman by Arthur Miller. (2021, Apr 03). Retrieved from https://papersowl.com/examples/the-death-of-a-salesman-by-arthur-miller/

“Death of a Salesman” by Arthur Miller and “The Great Gatsby” by F. Scott Fitzgerald