Different American Dreams in Death of a Salesman 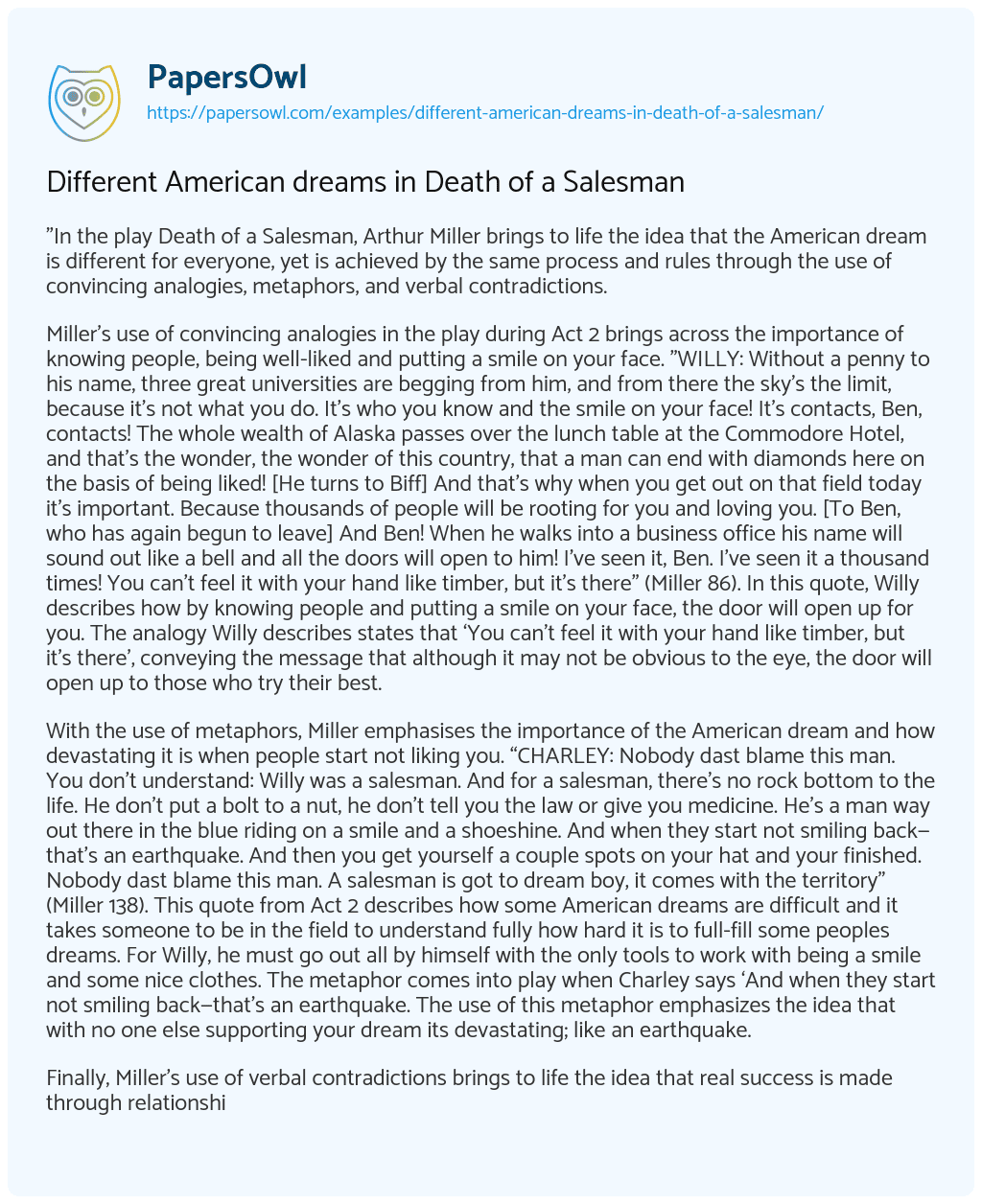 “In the play Death of a Salesman, Arthur Miller brings to life the idea that the American dream is different for everyone, yet is achieved by the same process and rules through the use of convincing analogies, metaphors, and verbal contradictions.

Miller’s use of convincing analogies in the play during Act 2 brings across the importance of knowing people, being well-liked and putting a smile on your face. ”WILLY: Without a penny to his name, three great universities are begging from him, and from there the sky’s the limit, because it’s not what you do. It’s who you know and the smile on your face! It’s contacts, Ben, contacts! The whole wealth of Alaska passes over the lunch table at the Commodore Hotel, and that’s the wonder, the wonder of this country, that a man can end with diamonds here on the basis of being liked! [He turns to Biff] And that’s why when you get out on that field today it’s important. Because thousands of people will be rooting for you and loving you. [To Ben, who has again begun to leave] And Ben! When he walks into a business office his name will sound out like a bell and all the doors will open to him! I’ve seen it, Ben. I’ve seen it a thousand times! You can’t feel it with your hand like timber, but it’s there” (Miller 86). In this quote, Willy describes how by knowing people and putting a smile on your face, the door will open up for you. The analogy Willy describes states that ‘You can’t feel it with your hand like timber, but it’s there’, conveying the message that although it may not be obvious to the eye, the door will open up to those who try their best.

With the use of metaphors, Miller emphasises the importance of the American dream and how devastating it is when people start not liking you. “CHARLEY: Nobody dast blame this man. You don’t understand: Willy was a salesman. And for a salesman, there’s no rock bottom to the life. He don’t put a bolt to a nut, he don’t tell you the law or give you medicine. He’s a man way out there in the blue riding on a smile and a shoeshine. And when they start not smiling back—that’s an earthquake. And then you get yourself a couple spots on your hat and your finished. Nobody dast blame this man. A salesman is got to dream boy, it comes with the territory” (Miller 138). This quote from Act 2 describes how some American dreams are difficult and it takes someone to be in the field to understand fully how hard it is to full-fill some peoples dreams. For Willy, he must go out all by himself with the only tools to work with being a smile and some nice clothes. The metaphor comes into play when Charley says ‘And when they start not smiling back—that’s an earthquake. The use of this metaphor emphasizes the idea that with no one else supporting your dream its devastating; like an earthquake.

Finally, Miller’s use of verbal contradictions brings to life the idea that real success is made through relationships with others. “WILLY: ‘Cause what could be more satisfying than to be able to go, at the age of eighty-four, into twenty or thirty different cities, and pick up a phone, and be remembered and loved and helped by so many different people? Do you know? When he died—and by the way he died the death of a salesman, in his in his green velvet slippers in the smoker of New York, New Haven and Hartford, going into Boston—when he died, hundreds of salesman and buyers were at his funeral. Things were sad on a lotta trains for months after that. In those days, there was personality in it, Howard. There was respect, and comradeship and gratitude in it. Today it’s all cut and dried, and there’s no chance for bringing friendship to bear—or personality. You see what I mean? They don’t know me anymore” (Miller 81). This quote is a perfect example of Miller’s use of verbal contradictions because it describes how Willy feels success is made real through his relationships with others and that if he is well-liked by all, he will have truly made it. Yet, he is starting to face the fact that not many people at all really know him or care about him.

In conclusion, everyone has their own idea of the American dream and even though they are drastically different across the board, it is still the same process for all. From a singer to a businessman, or even an electrician, it is clear to see that the characteristics of always putting on a smile and being well-liked are always a part of living the American dream. Arthur Miller brings to life this idea that the American dream is different for everyone, yet is achieved by the same process and rules in Death of a Salesman through the use of convincing analogies, metaphors, and verbal contradictions.”

Different American dreams in Death of a Salesman. (2020, Aug 25). Retrieved from https://papersowl.com/examples/different-american-dreams-in-death-of-a-salesman/