Comparing and Contrasting Odysseus and Hrothgar 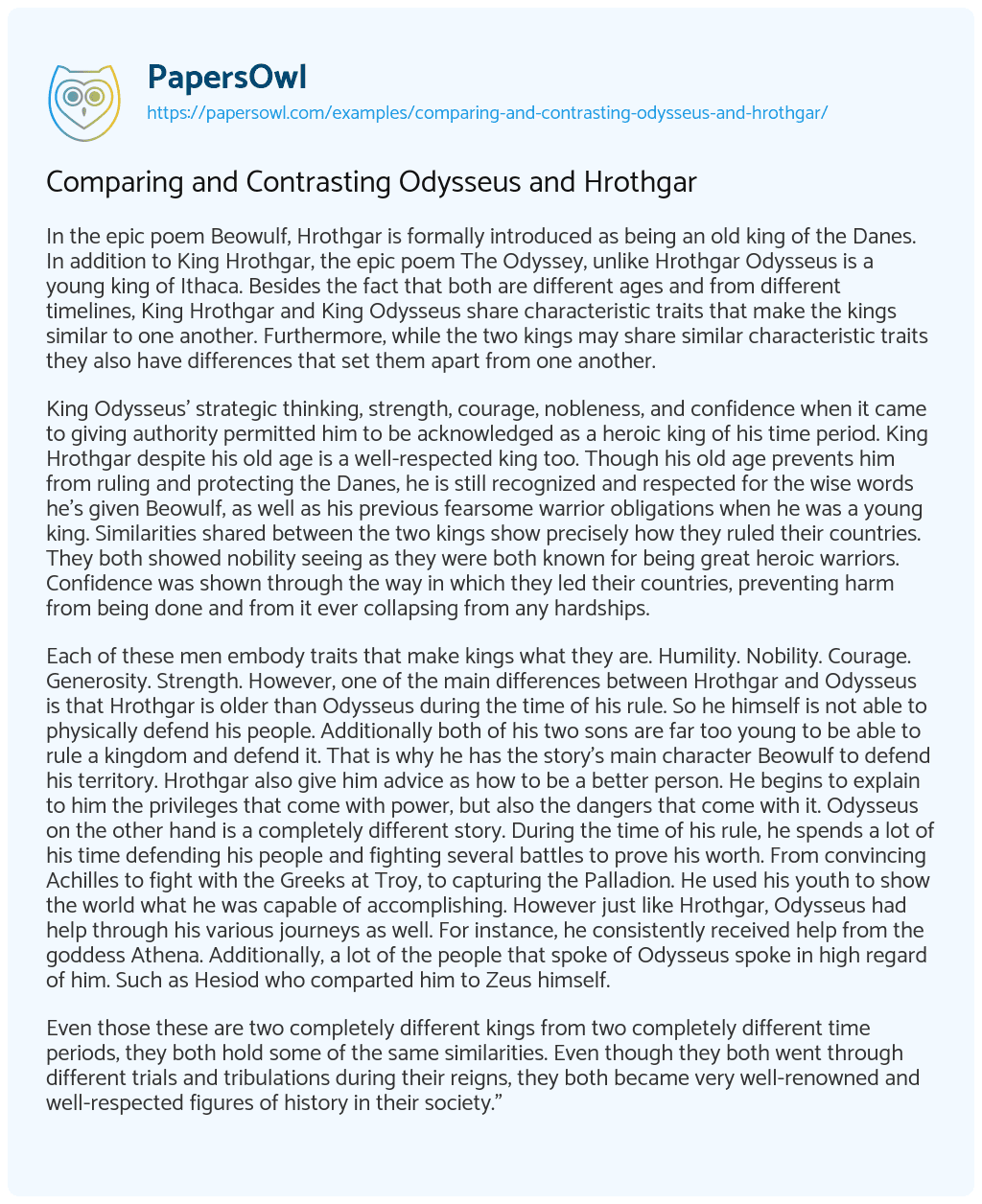 In the epic poem Beowulf, Hrothgar is formally introduced as being an old king of the Danes. In addition to King Hrothgar, the epic poem The Odyssey, unlike Hrothgar Odysseus is a young king of Ithaca. Besides the fact that both are different ages and from different timelines, King Hrothgar and King Odysseus share characteristic traits that make the kings similar to one another. Furthermore, while the two kings may share similar characteristic traits they also have differences that set them apart from one another.

King Odysseus’ strategic thinking, strength, courage, nobleness, and confidence when it came to giving authority permitted him to be acknowledged as a heroic king of his time period. King Hrothgar despite his old age is a well-respected king too. Though his old age prevents him from ruling and protecting the Danes, he is still recognized and respected for the wise words he’s given Beowulf, as well as his previous fearsome warrior obligations when he was a young king. Similarities shared between the two kings show precisely how they ruled their countries. They both showed nobility seeing as they were both known for being great heroic warriors. Confidence was shown through the way in which they led their countries, preventing harm from being done and from it ever collapsing from any hardships.

Each of these men embody traits that make kings what they are. Humility. Nobility. Courage. Generosity. Strength. However, one of the main differences between Hrothgar and Odysseus is that Hrothgar is older than Odysseus during the time of his rule. So he himself is not able to physically defend his people. Additionally both of his two sons are far too young to be able to rule a kingdom and defend it. That is why he has the story’s main character Beowulf to defend his territory. Hrothgar also give him advice as how to be a better person. He begins to explain to him the privileges that come with power, but also the dangers that come with it. Odysseus on the other hand is a completely different story. During the time of his rule, he spends a lot of his time defending his people and fighting several battles to prove his worth. From convincing Achilles to fight with the Greeks at Troy, to capturing the Palladion. He used his youth to show the world what he was capable of accomplishing. However just like Hrothgar, Odysseus had help through his various journeys as well. For instance, he consistently received help from the goddess Athena. Additionally, a lot of the people that spoke of Odysseus spoke in high regard of him. Such as Hesiod who comparted him to Zeus himself.

Comparing and Contrasting Odysseus and Hrothgar. (2020, Aug 20). Retrieved from https://papersowl.com/examples/comparing-and-contrasting-odysseus-and-hrothgar/

The Story of Odysseus Moral Lessons