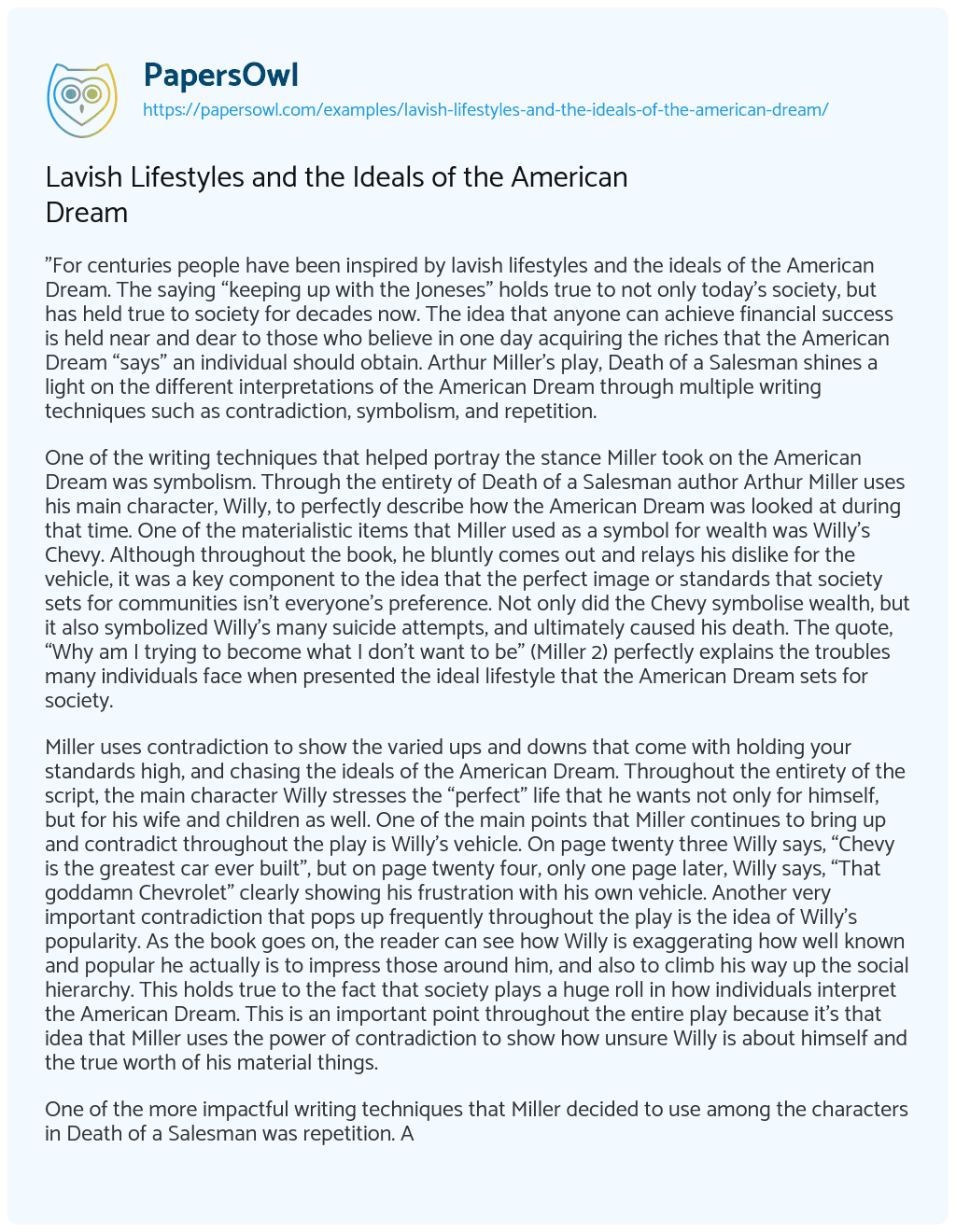 “For centuries people have been inspired by lavish lifestyles and the ideals of the American Dream. The saying “keeping up with the Joneses” holds true to not only today’s society, but has held true to society for decades now. The idea that anyone can achieve financial success is held near and dear to those who believe in one day acquiring the riches that the American Dream “says” an individual should obtain. Arthur Miller’s play, Death of a Salesman shines a light on the different interpretations of the American Dream through multiple writing techniques such as contradiction, symbolism, and repetition.

One of the writing techniques that helped portray the stance Miller took on the American Dream was symbolism. Through the entirety of Death of a Salesman author Arthur Miller uses his main character, Willy, to perfectly describe how the American Dream was looked at during that time. One of the materialistic items that Miller used as a symbol for wealth was Willy’s Chevy. Although throughout the book, he bluntly comes out and relays his dislike for the vehicle, it was a key component to the idea that the perfect image or standards that society sets for communities isn’t everyone’s preference. Not only did the Chevy symbolise wealth, but it also symbolized Willy’s many suicide attempts, and ultimately caused his death. The quote, “Why am I trying to become what I don’t want to be” (Miller 2) perfectly explains the troubles many individuals face when presented the ideal lifestyle that the American Dream sets for society.

Miller uses contradiction to show the varied ups and downs that come with holding your standards high, and chasing the ideals of the American Dream. Throughout the entirety of the script, the main character Willy stresses the “perfect” life that he wants not only for himself, but for his wife and children as well. One of the main points that Miller continues to bring up and contradict throughout the play is Willy’s vehicle. On page twenty three Willy says, “Chevy is the greatest car ever built”, but on page twenty four, only one page later, Willy says, “That goddamn Chevrolet” clearly showing his frustration with his own vehicle. Another very important contradiction that pops up frequently throughout the play is the idea of Willy’s popularity. As the book goes on, the reader can see how Willy is exaggerating how well known and popular he actually is to impress those around him, and also to climb his way up the social hierarchy. This holds true to the fact that society plays a huge roll in how individuals interpret the American Dream. This is an important point throughout the entire play because it’s that idea that Miller uses the power of contradiction to show how unsure Willy is about himself and the true worth of his material things.

One of the more impactful writing techniques that Miller decided to use among the characters in Death of a Salesman was repetition. A recurring pattern throughout the play is Willy and his families constant need to be “well liked”. When Willy’s son Biff plans to ask Oliver for a job, Happy, his brother, encourages him to do it by telling him that he is “well liked”. Another example is when Willy in a flashback speaking to his sons, and he says that his business will be more successful than their uncles because he’s more “well liked”. Miller’s consistency with the phrase shows how the American Dream can affect social norms, and how individuals feel they should be viewed by others based off of those norms.

Author Arthur Miller uses Willy and his family to portray what the American Dream means to an average low income family, and also the horrifying damage that the dream can do to not only an individual, but to whole families. While the American Dream seems perfect for everyone, Miller shows the devastating outcomes of trying to live above one’s means. He perfectly captures the true cliches people often have for individuals living lavish lifestyles, and how sometimes behind the scenes lyes a terrible, unfortunate trap.”

Lavish Lifestyles and the Ideals of the American Dream. (2021, Jun 16). Retrieved from https://papersowl.com/examples/lavish-lifestyles-and-the-ideals-of-the-american-dream/