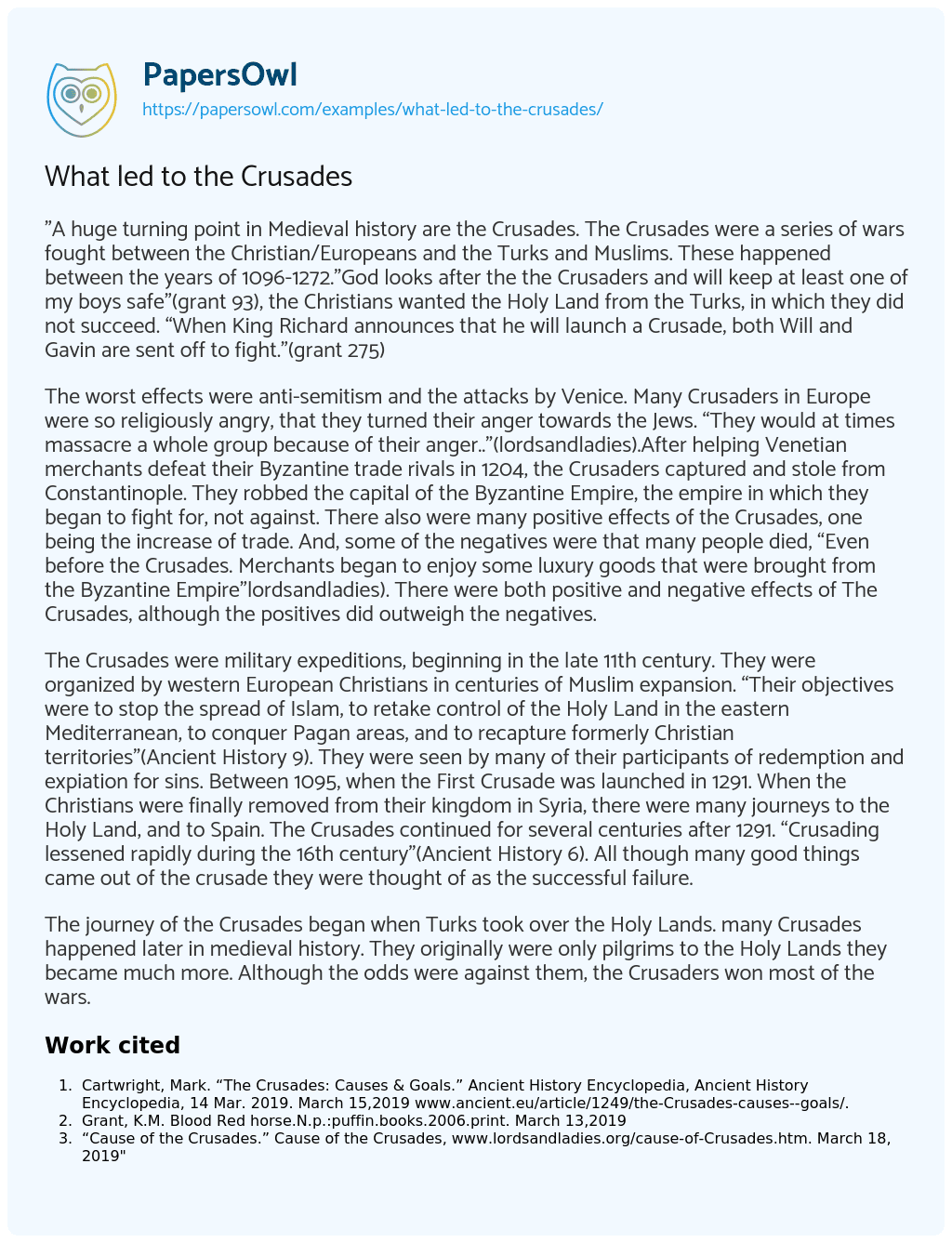 “A huge turning point in Medieval history are the Crusades. The Crusades were a series of wars fought between the Christian/Europeans and the Turks and Muslims. These happened between the years of 1096-1272.”God looks after the the Crusaders and will keep at least one of my boys safe”(grant 93), the Christians wanted the Holy Land from the Turks, in which they did not succeed. “When King Richard announces that he will launch a Crusade, both Will and Gavin are sent off to fight.”(grant 275)

The worst effects were anti-semitism and the attacks by Venice. Many Crusaders in Europe were so religiously angry, that they turned their anger towards the Jews. “They would at times massacre a whole group because of their anger..”(lordsandladies).After helping Venetian merchants defeat their Byzantine trade rivals in 1204, the Crusaders captured and stole from Constantinople. They robbed the capital of the Byzantine Empire, the empire in which they began to fight for, not against. There also were many positive effects of the Crusades, one being the increase of trade. And, some of the negatives were that many people died, “Even before the Crusades. Merchants began to enjoy some luxury goods that were brought from the Byzantine Empire”lordsandladies). There were both positive and negative effects of The Crusades, although the positives did outweigh the negatives.

The Crusades were military expeditions, beginning in the late 11th century. They were organized by western European Christians in centuries of Muslim expansion. “Their objectives were to stop the spread of Islam, to retake control of the Holy Land in the eastern Mediterranean, to conquer Pagan areas, and to recapture formerly Christian territories”(Ancient History 9). They were seen by many of their participants of redemption and expiation for sins. Between 1095, when the First Crusade was launched in 1291. When the Christians were finally removed from their kingdom in Syria, there were many journeys to the Holy Land, and to Spain. The Crusades continued for several centuries after 1291. “Crusading lessened rapidly during the 16th century”(Ancient History 6). All though many good things came out of the crusade they were thought of as the successful failure.

The journey of the Crusades began when Turks took over the Holy Lands. many Crusades happened later in medieval history. They originally were only pilgrims to the Holy Lands they became much more. Although the odds were against them, the Crusaders won most of the wars.

What led to the Crusades. (2021, Jun 17). Retrieved from https://papersowl.com/examples/what-led-to-the-crusades/

Causes and Consequences of the Crusades