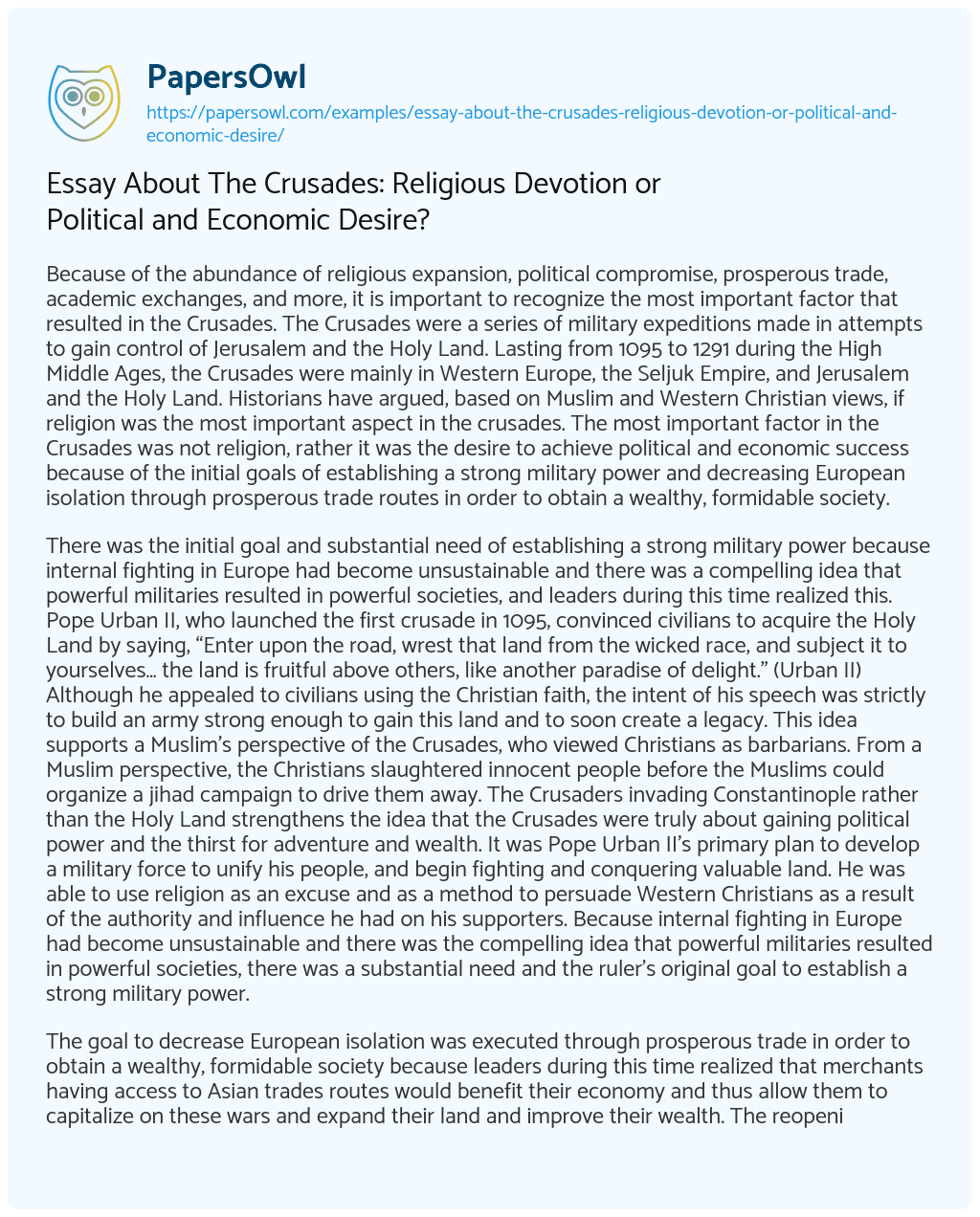 Because of the abundance of religious expansion, political compromise, prosperous trade, academic exchanges, and more, it is important to recognize the most important factor that resulted in the Crusades. The Crusades were a series of military expeditions made in attempts to gain control of Jerusalem and the Holy Land. Lasting from 1095 to 1291 during the High Middle Ages, the Crusades were mainly in Western Europe, the Seljuk Empire, and Jerusalem and the Holy Land. Historians have argued, based on Muslim and Western Christian views, if religion was the most important aspect in the crusades. The most important factor in the Crusades was not religion, rather it was the desire to achieve political and economic success because of the initial goals of establishing a strong military power and decreasing European isolation through prosperous trade routes in order to obtain a wealthy, formidable society.

There was the initial goal and substantial need of establishing a strong military power because internal fighting in Europe had become unsustainable and there was a compelling idea that powerful militaries resulted in powerful societies, and leaders during this time realized this. Pope Urban II, who launched the first crusade in 1095, convinced civilians to acquire the Holy Land by saying, “Enter upon the road, wrest that land from the wicked race, and subject it to yourselves… the land is fruitful above others, like another paradise of delight.” (Urban II) Although he appealed to civilians using the Christian faith, the intent of his speech was strictly to build an army strong enough to gain this land and to soon create a legacy. This idea supports a Muslim’s perspective of the Crusades, who viewed Christians as barbarians. From a Muslim perspective, the Christians slaughtered innocent people before the Muslims could organize a jihad campaign to drive them away. The Crusaders invading Constantinople rather than the Holy Land strengthens the idea that the Crusades were truly about gaining political power and the thirst for adventure and wealth. It was Pope Urban II’s primary plan to develop a military force to unify his people, and begin fighting and conquering valuable land. He was able to use religion as an excuse and as a method to persuade Western Christians as a result of the authority and influence he had on his supporters. Because internal fighting in Europe had become unsustainable and there was the compelling idea that powerful militaries resulted in powerful societies, there was a substantial need and the ruler’s original goal to establish a strong military power.

The goal to decrease European isolation was executed through prosperous trade in order to obtain a wealthy, formidable society because leaders during this time realized that merchants having access to Asian trades routes would benefit their economy and thus allow them to capitalize on these wars and expand their land and improve their wealth. The reopening of trade routes was a common goal in Europe, leading to unity and coexistence. The leader’s during the Crusades had the original intent of boosting their economy and used religion as a way to persuade civilians into enduring the wars.

The controversial topic of whether the Crusades were truly about religion still stands, and historians have debated whether or not “Holy Wars” is really the best name for this time. Religion is commonly thought to be the most important factor of the Crusades because primary sources often explain the devotion to the Crusader’s religion and because religious persecution was present during this time. It is true that many Crusaders attacked the Holy Land in the name of God and for their faith, or was it that these civilians were hungry for adventure and change in their undesirable, repetitive everyday lives? In Pope Urban II’s speech at Council of Clermont, he promises Crusaders gold and land, something the lower class was attracted to that the expeditions could supply. The pope used the practice of primogeniture to attain more potential soldiers in his plan to build an army and acquire land. He wanted the Holy Land for political and economic purposes, however he was able to manipulate his devout people into believing it was for the Christian faith. Admittedly, religious persecution and discrimination was prevalent during the crusades. However, there was even more religious coexistence during the crusades. Religious coexistence during these wars, according to Zachary Karabell’s “Peace Be Upon You”, included intermarriage between religions and places for multiple religions to worship, which exhibits the right to prayer. Because of this, there was clear religious coexistence however lack of religious conversion. Therefore, historians can argue that the ideals of cohesion and success were far more valuable than the illogical chaos occuring during the Crusades, which all the Religions looked down upon. Because of the Crusader’s naturalistic greed for wealth and excitement and the evident religious coexistence and agreements, the most important factor in the Crusades was the urge to achieve political and economic success.

Religion was not the most important factor in the Crusades, rather it was the desire to achieve political and economic success because of the initial goal of establishing a strong military power and the goal of decreasing European isolation through prosperous trade routes in order to obtain a wealthy, formidable society. The most important factor of the Crusades deserves to be recognized because people automatically associate the Crusades with religion due to historians commonly referring to them as “holy wars”. Although the people fighting were fighting for their religion, the leaders who sent the Crusaders on these wars were not doing so in the name of their faith. The crusades were caused by factors, political and economic success, that were efficient and widespread, and would benefit societies for multiple years after the wars.

Essay About The Crusades: Religious Devotion or Political and Economic Desire?. (2021, Jun 30). Retrieved from https://papersowl.com/examples/essay-about-the-crusades-religious-devotion-or-political-and-economic-desire/

Sense of Political and Religious Tension

Causes and Consequences of the Crusades