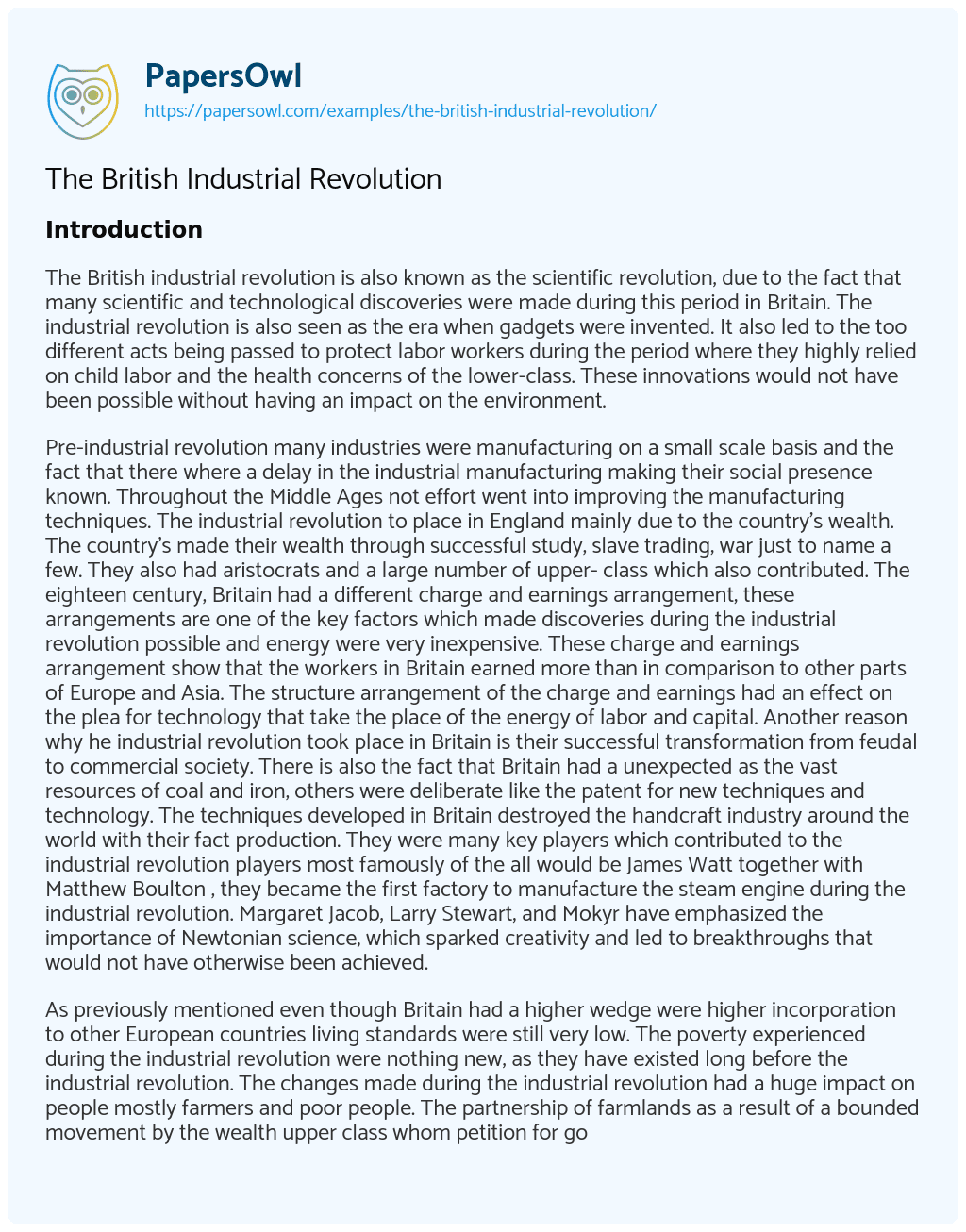 The British industrial revolution is also known as the scientific revolution, due to the fact that many scientific and technological discoveries were made during this period in Britain. The industrial revolution is also seen as the era when gadgets were invented. It also led to the too different acts being passed to protect labor workers during the period where they highly relied on child labor and the health concerns of the lower-class. These innovations would not have been possible without having an impact on the environment.

Pre-industrial revolution many industries were manufacturing on a small scale basis and the fact that there where a delay in the industrial manufacturing making their social presence known. Throughout the Middle Ages not effort went into improving the manufacturing techniques. The industrial revolution to place in England mainly due to the country’s wealth. The country’s made their wealth through successful study, slave trading, war just to name a few. They also had aristocrats and a large number of upper- class which also contributed. The eighteen century, Britain had a different charge and earnings arrangement, these arrangements are one of the key factors which made discoveries during the industrial revolution possible and energy were very inexpensive. These charge and earnings arrangement show that the workers in Britain earned more than in comparison to other parts of Europe and Asia. The structure arrangement of the charge and earnings had an effect on the plea for technology that take the place of the energy of labor and capital. Another reason why he industrial revolution took place in Britain is their successful transformation from feudal to commercial society. There is also the fact that Britain had a unexpected as the vast resources of coal and iron, others were deliberate like the patent for new techniques and technology. The techniques developed in Britain destroyed the handcraft industry around the world with their fact production. They were many key players which contributed to the industrial revolution players most famously of the all would be James Watt together with Matthew Boulton , they became the first factory to manufacture the steam engine during the industrial revolution. Margaret Jacob, Larry Stewart, and Mokyr have emphasized the importance of Newtonian science, which sparked creativity and led to breakthroughs that would not have otherwise been achieved.

As previously mentioned even though Britain had a higher wedge were higher incorporation to other European countries living standards were still very low. The poverty experienced during the industrial revolution were nothing new, as they have existed long before the industrial revolution. The changes made during the industrial revolution had a huge impact on people mostly farmers and poor people. The partnership of farmlands as a result of a bounded movement by the wealth upper class whom petition for government to own the land occupied by lower class and so push the poor of the farms and into the cities. During this time the proportion of people living in the cities rose from 10 to 50 percent. Due to the rise of factories only a number of jobs where available to the former farmers whom many were unskilled. The rise of people coming migrating from the rural to the cities and engulfs the facilities. Poorly build and low-cost houses were developed and people were packed into them. Only providing the lower class with the basic necessities due to the rise in urban population.

At some point there were up to 15-20 men and women living in one home, they hardly had any furniture, the only indication it gives of being a home is the fire place. During the industrial revolution, the labor conditions in which the people worked were often gruesome. The use of child labor was common in the work place and children as young as 4, worked long hours and mistreatment in all different forms where frequent. These children lacked the basic safety insurance of a save work environment. The Public Health system could not keep up with the crowing urbanization like adequate sewage system. The employment of children worsens the concern of health issues. These workers often received low wages which led to crowded houses insufficient sanitation and poor diets. Life expectancy at birth in Manchester alone was 17 years, this figure reflects the high child mortality rate of over 50 percent. The physical structure of many of the factory workers had change during the industrial revolution. According to a letter by British surgeon Philip Gaskrill dated in 1833. The men showed signs of abnormal flatter features. The women and girls walked lamely and uncomfortably with a raised chest and spinal flexures . The diets were highly depended on the mother’s access to money and food, men did receive higher wedges than women, but did little to improve the diets of their wives and children. Many women also turned to prostitution as the main source of income.

As previously mentioned with the invention of the textile technology and the high demand for products mean the rise of factories. The transition is being described as being essentially commercial and agricultural society into one where the manufacturing became more of a dominant economic life. “Before the mid-nineteenth century places like Glasgow, Newcastle, and Rhodda Valley were noting but wasteland or farmland.” This is an indication how immense the industry were they had use the wasteland to build factories. The factories created a new backdrop for a new incompatible social habitat. The use of coal was used to fuel the factories and to heat many homes. The burning of coal left many buildings in cities covered covered in soot, which is a byproduct due to the burning of coal, not only that the burning of the coal also led to air pollution. The inadequate sewage treatment plants led to raw human waste being deposited into rivers and streams. The smell of the water at the time caused for concern, and the whole river were filled with an cloudy pale brown fluid. Due to the severity of the pollution during this time period forced government to pass new laws. One of these cases are the Birmingham Corporation sewage pollution case, which the court laid down strict instructions to purity of watercourse. During the industrial revolution sparked a parliamentary and non- parliamentary debate concerning the industrial nuisance disputes concerning pollution from private factories.

The British Industrial revolution would not have been possible without the wealth of the country and the huge upper-class which also contributed to the industrial revolution. Even though the Industrial revolution prompted new and better techniques it also led to the exploitation of farmers and lower- class workers especially the child laborers. It saw the poor quality of house and the iniquity sewage system which led to health problems. The burning of coal to produce energy and drive the machines were also the cause of physical and the and the pollution of the air.”

The British Industrial Revolution. (2021, May 20). Retrieved from https://papersowl.com/examples/the-british-industrial-revolution/