Child Labor Back in the 19th Century 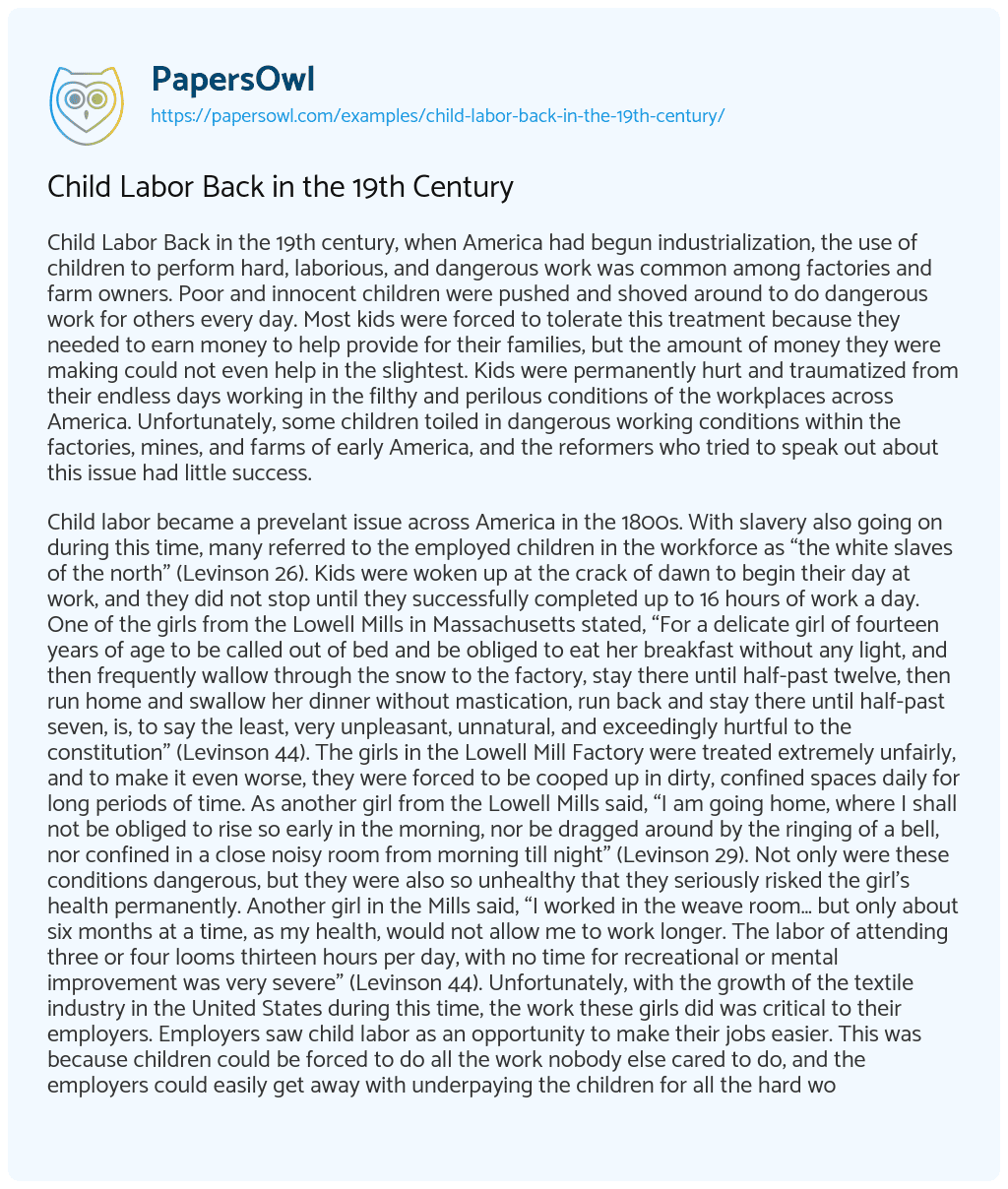 Child Labor Back in the 19th century, when America had begun industrialization, the use of children to perform hard, laborious, and dangerous work was common among factories and farm owners. Poor and innocent children were pushed and shoved around to do dangerous work for others every day. Most kids were forced to tolerate this treatment because they needed to earn money to help provide for their families, but the amount of money they were making could not even help in the slightest. Kids were permanently hurt and traumatized from their endless days working in the filthy and perilous conditions of the workplaces across America. Unfortunately, some children toiled in dangerous working conditions within the factories, mines, and farms of early America, and the reformers who tried to speak out about this issue had little success.

Child labor became a prevelant issue across America in the 1800s. With slavery also going on during this time, many referred to the employed children in the workforce as “the white slaves of the north” (Levinson 26). Kids were woken up at the crack of dawn to begin their day at work, and they did not stop until they successfully completed up to 16 hours of work a day. One of the girls from the Lowell Mills in Massachusetts stated, “For a delicate girl of fourteen years of age to be called out of bed and be obliged to eat her breakfast without any light, and then frequently wallow through the snow to the factory, stay there until half-past twelve, then run home and swallow her dinner without mastication, run back and stay there until half-past seven, is, to say the least, very unpleasant, unnatural, and exceedingly hurtful to the constitution” (Levinson 44). The girls in the Lowell Mill Factory were treated extremely unfairly, and to make it even worse, they were forced to be cooped up in dirty, confined spaces daily for long periods of time. As another girl from the Lowell Mills said, “I am going home, where I shall not be obliged to rise so early in the morning, nor be dragged around by the ringing of a bell, nor confined in a close noisy room from morning till night” (Levinson 29). Not only were these conditions dangerous, but they were also so unhealthy that they seriously risked the girl’s health permanently. Another girl in the Mills said, “I worked in the weave room… but only about six months at a time, as my health, would not allow me to work longer. The labor of attending three or four looms thirteen hours per day, with no time for recreational or mental improvement was very severe” (Levinson 44). Unfortunately, with the growth of the textile industry in the United States during this time, the work these girls did was critical to their employers. Employers saw child labor as an opportunity to make their jobs easier. This was because children could be forced to do all the work nobody else cared to do, and the employers could easily get away with underpaying the children for all the hard work they were doing.

Also, during the Industrial Revolution, the number of children in the workforce began to become a problem. With so many new discoveries during this time, there was an overwhelming amount of work that needed to be done in order to make all the products that were demanded by the citizens. For example, glass was one of the many commodities that were constantly needed throughout the country. Glass making was immensely dangerous compared to some other jobs that needed to be done. Anyone who worked in a glass factory was put at risk for being seriously injured or even killed. Because of this, the only people that could be found to complete the job were children that did not know what they were getting into. For example, when John Spargo toured a glass factory in New Jersey back in 1906, he said that “severe burns and the loss of sight are regular risks in glass-bottle making” and the kids in the factories “fall ready victims to pneumonia and to its heir, the great white plague.” Not only was sickness and injury a big part of these kids lives, but they were also forced to work under difficult circumstances. When John Spargo was describing the type of work the children endured in the factories, he also said, “The distance to the annealing oven in the factory in question was one hundred feet, and the boys made seventy-two trips per hour, making the distance traveled in eight hours nearly twenty-two miles. Over half of this distance, the boys were carrying their hot loads to the oven.” After a long day of hard work, the kids were sent home to get a few hours of sleep and were expected report to work again bright and early the next morning. Since work took up most, if not all, of the children’s lives, school was totally out of the question for many of them. They also could not afford to go to school since they were making far below minimum wage for their time at the factory. “The pay of these boys varies from sixty cents to a dollar for every eight hours” (Spargo). Between the risks of working in these factories to the massive amounts of labor these children tolerated every day, the least the factories could do was give them decent pay to help out their families.

In order to bring an end to these terrible working conditions experienced by innocent children, many people stepped up to make a difference by speaking out about what has been going on. Lewis Hine was a photographer who studied child labor through his photos with the National Child Labor Committee. Hine published a book of his photographs and discoveries to expose the hazards of child labor. He also created a story to go along with the pictures to describe the life inside the walls of the factories. He did this so people would realize what terrible things were happening to kids in the workforce and hopefully say something about this issue. “Laborers as young as three years old often held jobs, and many children worked twelve hours or more a day, six days a week… The kid’s families needed their wages to survive, but working kids lost any chance for a better future.” (Hine, 1) Hine highlighted the worst parts of working in the loud, gruesome factories in order to make a difference in his reader’s thoughts about child labor. He also advertised the pitiful ways kids were treated, “small girls tended noisy machines in the spinning rooms of cotton mills… they were kept awake by having cold water thrown at their faces.” (Hine, 2) The powerful messages portrayed throughout his book really made a difference in people’s eyes, and he sent out an important message about the disturbing things done to children.

By the 1900s, child labor was a national issue that could no longer be ignored. Between the 1,750,000 children in America, ages of ten to fifteen, twenty percent of them were part of the paid workforce. Some other people also began picking up on this issue and advocating for children’s rights. For example, Reverend Edgar Murphy and others from the states of North and South Carolina, Alabama and Georgia founded the Alabama Child Labor Committee to work for lasting change in the United States. Murphy became aware of the concern about child labor when he saw children walking to work at the crack of dawn every morning of the week. “Murphy had been shocked in 1898 and 1899, when he founded a mission and settlement house for the textile workers living in his city’s West End, to see legions of children marching to work in the morning instead of to school and living in severe poverty” (Reef 1) Once Murphy had realized this was a national issue he began looking into it and he soon became aware of the horrendous working conditions like Lewis Hine. He researched the topic across the country and began some reforms to advocate for children’s rights. He also was appalled by some of the terrible things done to kids, “two fingers had been torn from the hand of an eight-year-old when it became entangled in mill machinery, the factory owner blamed the child, who should have been more diligent.” (Reef 2) After hearing about terrible things like this, Murphy began taking photos and publishing pamphlets during his research that compared child labor to slavery. Murphy and his supporters made a lot of noise about this issue, and it soon persuaded the Alabama legislature to pass the first real child labor law in 1903. This was a huge accomplishment in the United States, but the battle to end child labor had just begun.

Many laws and amendments had tried to be passed in order to abolish child labor in the United States, but a lot of the times they failed. One person who tried to raise awareness about this problem was Arthur Garfield Hayes. Hayes was a lawyer who began speaking out about child labor laws for child labor in 1935 on a radio talk show. On this talk show, Hayes emphasized the improper ways children were being treated in the workforce. He also talked about the Child Labor Amendment of 1926 that had finally been passed in the United States. It took a long time for this amendment to be passed because it was continuously getting declined in Congress. Throughout Hayes’ speech, he brought up multiple times a child labor law had been proposed to Congress but declined. Hayes said, “As a matter of fact we have had child labor laws passed by Congress on two different occasions. Both were declared unconstitutional by divided court opinion.” The reason these laws could never get passed was that people in America actually supported it and they thought using children to their advantage was a good thing. Some people who favored child labor even said, “Why eighteen years of age? Many youths are quite capable of helping support the family before that time.” Hayes thought the fact that someone could ever decline a law to end child labor was shocking and disgusting because child labor was a big issue during this time that needed to be brought to an end.”

Child Labor Back in the 19th Century. (2021, Mar 18). Retrieved from https://papersowl.com/examples/child-labor-back-in-the-19th-century/

Child Labor in the 19th Century