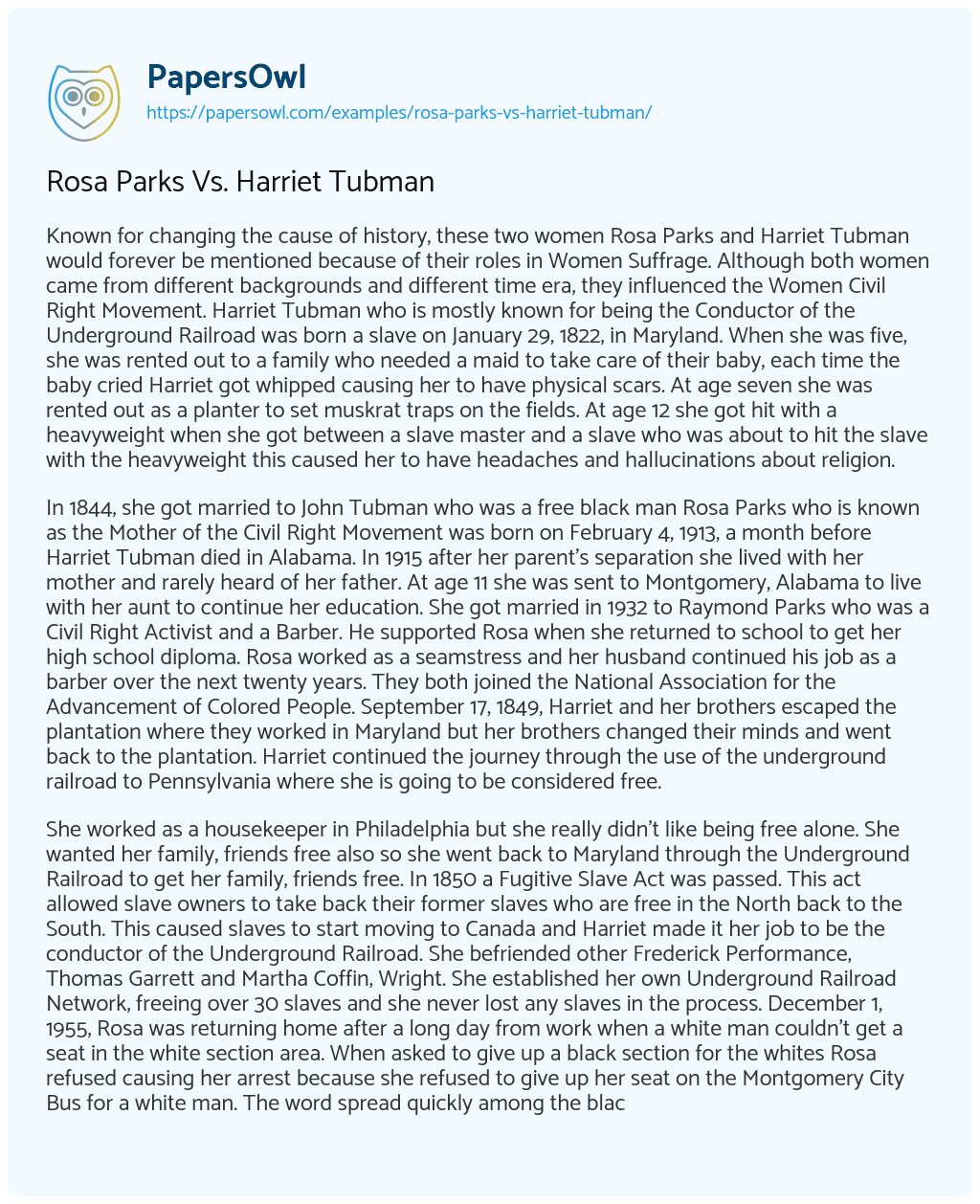 Known for changing the cause of history, these two women Rosa Parks and Harriet Tubman would forever be mentioned because of their roles in Women Suffrage. Although both women came from different backgrounds and different time era, they influenced the Women Civil Right Movement. Harriet Tubman who is mostly known for being the Conductor of the Underground Railroad was born a slave on January 29, 1822, in Maryland. When she was five, she was rented out to a family who needed a maid to take care of their baby, each time the baby cried Harriet got whipped causing her to have physical scars. At age seven she was rented out as a planter to set muskrat traps on the fields. At age 12 she got hit with a heavyweight when she got between a slave master and a slave who was about to hit the slave with the heavyweight this caused her to have headaches and hallucinations about religion.

In 1844, she got married to John Tubman who was a free black man Rosa Parks who is known as the Mother of the Civil Right Movement was born on February 4, 1913, a month before Harriet Tubman died in Alabama. In 1915 after her parent’s separation she lived with her mother and rarely heard of her father. At age 11 she was sent to Montgomery, Alabama to live with her aunt to continue her education. She got married in 1932 to Raymond Parks who was a Civil Right Activist and a Barber. He supported Rosa when she returned to school to get her high school diploma. Rosa worked as a seamstress and her husband continued his job as a barber over the next twenty years. They both joined the National Association for the Advancement of Colored People. September 17, 1849, Harriet and her brothers escaped the plantation where they worked in Maryland but her brothers changed their minds and went back to the plantation. Harriet continued the journey through the use of the underground railroad to Pennsylvania where she is going to be considered free.

She worked as a housekeeper in Philadelphia but she really didn’t like being free alone. She wanted her family, friends free also so she went back to Maryland through the Underground Railroad to get her family, friends free. In 1850 a Fugitive Slave Act was passed. This act allowed slave owners to take back their former slaves who are free in the North back to the South. This caused slaves to start moving to Canada and Harriet made it her job to be the conductor of the Underground Railroad. She befriended other Frederick Performance, Thomas Garrett and Martha Coffin, Wright. She established her own Underground Railroad Network, freeing over 30 slaves and she never lost any slaves in the process. December 1, 1955, Rosa was returning home after a long day from work when a white man couldn’t get a seat in the white section area. When asked to give up a black section for the whites Rosa refused causing her arrest because she refused to give up her seat on the Montgomery City Bus for a white man. The word spread quickly among the black population about her arrest and with the help of Martin Luther King Jr. the Montgomery Bus Boycott got launched which lasted for 382 days. December 5, Rosa was found guilty of violating a segregation law she was given a suspended sentence and a fine of 10 dollars. The boycott was violent but it got the attention of the government.

On November 13, 1956, the Supreme Court ruled the bus segregation unconstitutional and the boycott ended December 20, 1956 In 1861, after the Civil War broke out Harriet got recruited to help the fugitive slaves. She worked as a nurse, cook, and a laundress. She treated sick soldiers and fugitive slaves. In 1863 she was appointed the head of an espionage and scout network she worked as a spy and was able to provide information to the Union commanders about the Confederate Army supplies. After the Civil War, she settled with friends and family in New York. In 1869 she got married to Nelson Davis who was a former slave and also a Civil War veteran. Harriet sold homegrown produce and accepted donations and loans from friends. She spoke to women on behalf of the Women’s Suffrage Movement and worked with Susan B. Anthony who was a Suffrage leader. Also, that year, Harriet opened a home for the Aged band Indigent Colored People. She had brain surgery because of the brain injury she had sustained in her early life. Harriet Tubman died on March 13, 1913, due to pneumonia.

After the boycott and everything settling down, Rosa continued facing harassment causing her, her husband and mother to move to Detroit where her brother lived. She became an administrative aide for Congressman John Conyers Jr in 1965 till she retired in 1988. Rosa’s husband, mother, and brother all died of cancer in 1977. In 1999 she was awarded the Congressional Gold Award. Rosa Parks died October 24, 2005, making her the first woman in the U.S history to lie in state at the U.S Capitol.

Rosa Parks Vs. Harriet Tubman. (2020, May 03). Retrieved from https://papersowl.com/examples/rosa-parks-vs-harriet-tubman/