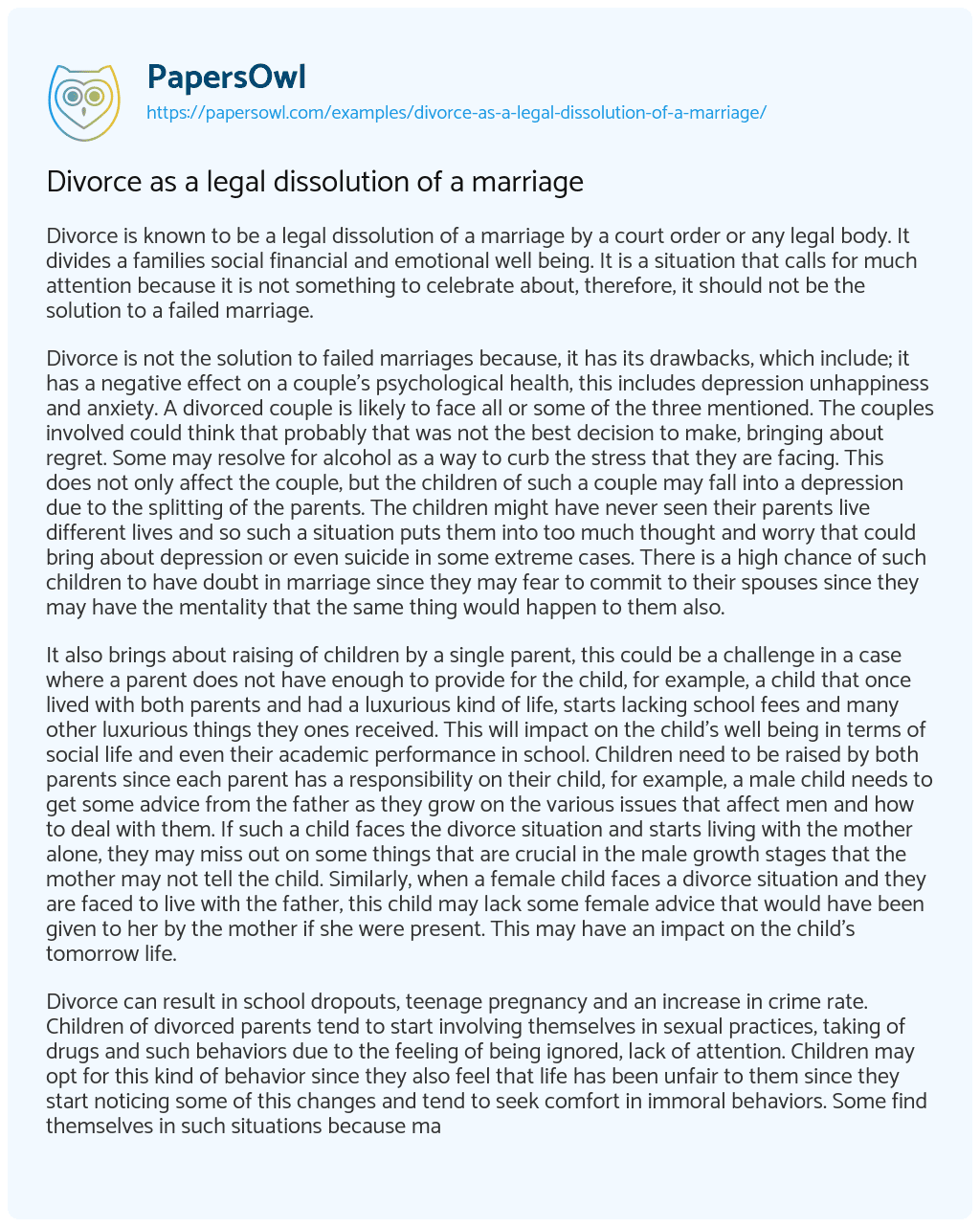 Divorce is known to be a legal dissolution of a marriage by a court order or any legal body. It divides a families social financial and emotional well being. It is a situation that calls for much attention because it is not something to celebrate about, therefore, it should not be the solution to a failed marriage.

Divorce is not the solution to failed marriages because, it has its drawbacks, which include; it has a negative effect on a couple’s psychological health, this includes depression unhappiness and anxiety. A divorced couple is likely to face all or some of the three mentioned. The couples involved could think that probably that was not the best decision to make, bringing about regret. Some may resolve for alcohol as a way to curb the stress that they are facing. This does not only affect the couple, but the children of such a couple may fall into a depression due to the splitting of the parents. The children might have never seen their parents live different lives and so such a situation puts them into too much thought and worry that could bring about depression or even suicide in some extreme cases. There is a high chance of such children to have doubt in marriage since they may fear to commit to their spouses since they may have the mentality that the same thing would happen to them also.

It also brings about raising of children by a single parent, this could be a challenge in a case where a parent does not have enough to provide for the child, for example, a child that once lived with both parents and had a luxurious kind of life, starts lacking school fees and many other luxurious things they ones received. This will impact on the child’s well being in terms of social life and even their academic performance in school. Children need to be raised by both parents since each parent has a responsibility on their child, for example, a male child needs to get some advice from the father as they grow on the various issues that affect men and how to deal with them. If such a child faces the divorce situation and starts living with the mother alone, they may miss out on some things that are crucial in the male growth stages that the mother may not tell the child. Similarly, when a female child faces a divorce situation and they are faced to live with the father, this child may lack some female advice that would have been given to her by the mother if she were present. This may have an impact on the child’s tomorrow life.

Divorce can result in school dropouts, teenage pregnancy and an increase in crime rate. Children of divorced parents tend to start involving themselves in sexual practices, taking of drugs and such behaviors due to the feeling of being ignored, lack of attention. Children may opt for this kind of behavior since they also feel that life has been unfair to them since they start noticing some of this changes and tend to seek comfort in immoral behaviors. Some find themselves in such situations because maybe the parent that is left responsible is not really taking good care of the kids.

Divorce has its better side in that; it brings about some sense of freedom in that one is able to restart their life without the other partner. A divorced person can have enough time to develop their personal skills that will help them work towards a better quality of life for themselves and their children. A child that experiences divorce may develop faster and be more responsible. Such children may now feel some relief especially if they have been separated from the parent that was more violent, they are able to do their things well and have a good growth.

It may also be appropriate in a situation where the party faces physical abuse or even emotional abuse. Some couples tend to be very violent to their significant other bringing about fights always. This is not a good picture being possed to the children and even the couple themselves, the party that suffers the abuse may even develop the fear for the other gender that may last a very long time, and so in such a case divorce would be the best solution to such a couple. Children of such a couple may develop a fear of the partner that causes the abuse and this may last a long time in the children’s memory.

Couples react differently to situations, and you may find that some couples are insecure with each other, to the extent that they cannot even go out and meet their friends and socialize, this makes them just revolve their life around those that they live with. This state makes the couple not be in a position to know other people, in the case of a woman; they may just be busy with house chores from time to time and even not be in a position to take care of themselves. So divorce would help such a lady be in a position to realize herself and love herself more, this may end up giving her openings and chances to explore herself in ways and things she never knew she had interest and abilities in.

In conclusion, when marriage fails to work, there are better solutions to the situation that include guidance and counseling, where couple’s get the chance to be guided by another party on how to solve their differences. They can also settle for reconciliation where they talk through their issues, forgive each other, and have their marriage continue. Attending marital mentorship programs that can help each them realize their mistakes each on their own, after they have heard from other people of how they deal with their marital problems.

Divorce as a legal dissolution of a marriage. (2019, Dec 28). Retrieved from https://papersowl.com/examples/divorce-as-a-legal-dissolution-of-a-marriage/

Effects of Marriage and Divorce on Children