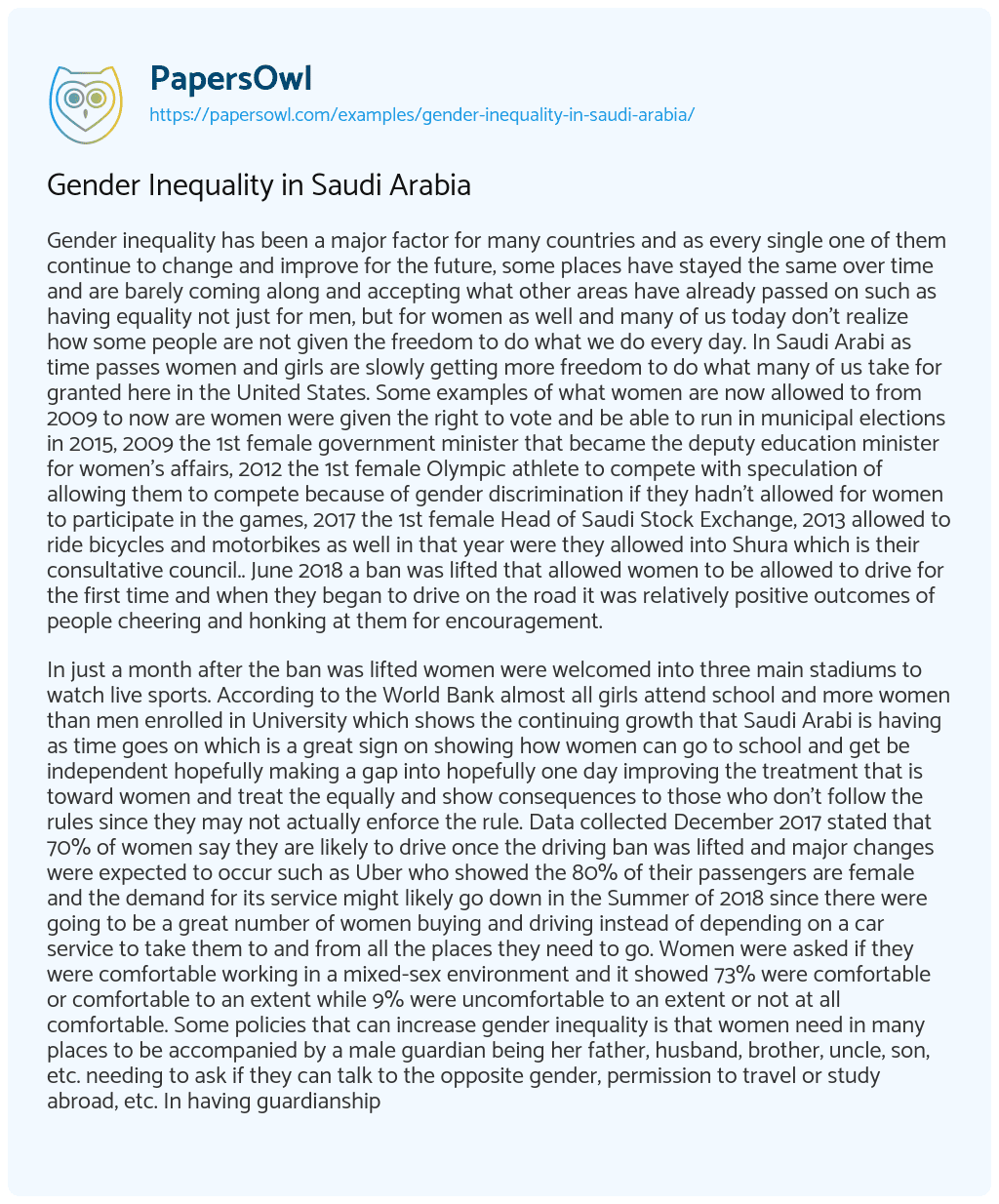 Gender inequality has been a major factor for many countries and as every single one of them continue to change and improve for the future, some places have stayed the same over time and are barely coming along and accepting what other areas have already passed on such as having equality not just for men, but for women as well and many of us today don’t realize how some people are not given the freedom to do what we do every day. In Saudi Arabi as time passes women and girls are slowly getting more freedom to do what many of us take for granted here in the United States. Some examples of what women are now allowed to from 2009 to now are women were given the right to vote and be able to run in municipal elections in 2015, 2009 the 1st female government minister that became the deputy education minister for women’s affairs, 2012 the 1st female Olympic athlete to compete with speculation of allowing them to compete because of gender discrimination if they hadn’t allowed for women to participate in the games, 2017 the 1st female Head of Saudi Stock Exchange, 2013 allowed to ride bicycles and motorbikes as well in that year were they allowed into Shura which is their consultative council.. June 2018 a ban was lifted that allowed women to be allowed to drive for the first time and when they began to drive on the road it was relatively positive outcomes of people cheering and honking at them for encouragement.

In just a month after the ban was lifted women were welcomed into three main stadiums to watch live sports. According to the World Bank almost all girls attend school and more women than men enrolled in University which shows the continuing growth that Saudi Arabi is having as time goes on which is a great sign on showing how women can go to school and get be independent hopefully making a gap into hopefully one day improving the treatment that is toward women and treat the equally and show consequences to those who don’t follow the rules since they may not actually enforce the rule. Data collected December 2017 stated that 70% of women say they are likely to drive once the driving ban was lifted and major changes were expected to occur such as Uber who showed the 80% of their passengers are female and the demand for its service might likely go down in the Summer of 2018 since there were going to be a great number of women buying and driving instead of depending on a car service to take them to and from all the places they need to go. Women were asked if they were comfortable working in a mixed-sex environment and it showed 73% were comfortable or comfortable to an extent while 9% were uncomfortable to an extent or not at all comfortable. Some policies that can increase gender inequality is that women need in many places to be accompanied by a male guardian being her father, husband, brother, uncle, son, etc. needing to ask if they can talk to the opposite gender, permission to travel or study abroad, etc. In having guardianship, it makes it very difficult for women to receive protection such as from a domestic violence home and reporting the event is even harder to do if there are no male relatives there with them. A woman who is trying to flee an abusive spouse or home can be arrested and returned back which isn’t safe at all since more than likely they are going to be punished for trying to escape from their “home” and they can’t live on their own, they must stay at home being dependent and relying on a male relative to maintain her.

Some jobs are prohibited for women to take positions for such as judges and drivers, men don’t need to tell their wives or have them in court in order to divorce them, a child can decide to live with their mother after a divorce if the courts allow it, but moms have no right to be the child’s legal guardian which can be complicated if they need to do something for the child and they aren’t allowed because of this rule. If imprisoned they aren’t able to leave until a male relative comes to get them out and if there family refuses to release them, they have to stay inside until they reconcile with family or obtain a new guardian to release them. One social policy that I would like to change is the Guardianship System in removing the ban to allow women to do normal everyday things which isn’t an actual law but has been very much enforced. An example of a country who is improving in equality towards women is Algeria, there was a case of a lady who became a widow and had a 6 year old son and needed to work outside of the house in order to bring in the income, this was uncommon and not looked upon as great for women to do.

El Ghaith Association helps to eradicate poverty and social exclusion of vulnerable groups especially women and children and they want to empower women to not be afraid to do work outside of the home since many are afraid of the negative criticism from family and friends if they do such action. The pros of having lifting the male guardianship is that now women can be independent in taking any work related trips needed without having to ask their male guardian and not be held back if they decide to not allow them to go, they can marry who they choose not based on others and another is study aboard and not be held back from great opportunities and a great education somewhere else. Another pro is that it can make reporting marriages of domestic violence or families easier than before since if the report is towards the person who is there guardian now cases of abuse might hopefully be reported and just can be served towards those who commit such crimes. A con to this could be divorce rates can potentially be high just like the United States around 40 to 50% of married couples end up getting a divorce. Another possible con to lifting this ban could be that there are going more women in danger of getting mugged, sexually harassed, rapes, etc. since they would not need a male to accompany them to wherever the need to go which increases crimes that may possible not be reported because of the shame of it being their fault for wanting to be independent so they must have asked for awful things to be done to them.

Women, Family and the Discovery of Oil in Saudi Arabia