Dan Millman’s the Way of the Peaceful Warrior 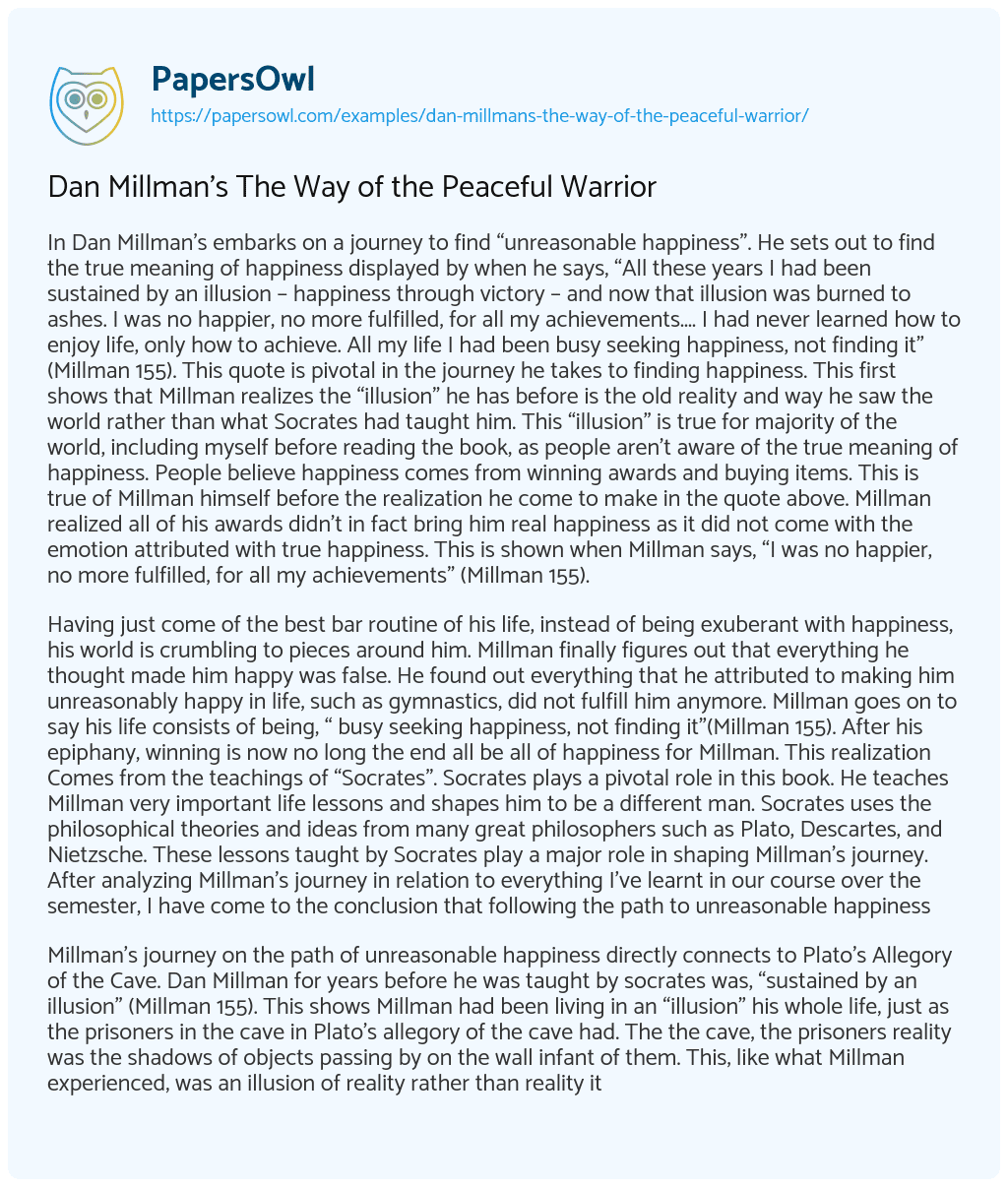 In Dan Millman’s embarks on a journey to find “unreasonable happiness”. He sets out to find the true meaning of happiness displayed by when he says, “All these years I had been sustained by an illusion – happiness through victory – and now that illusion was burned to ashes. I was no happier, no more fulfilled, for all my achievements…. I had never learned how to enjoy life, only how to achieve. All my life I had been busy seeking happiness, not finding it” (Millman 155). This quote is pivotal in the journey he takes to finding happiness. This first shows that Millman realizes the “illusion” he has before is the old reality and way he saw the world rather than what Socrates had taught him. This “illusion” is true for majority of the world, including myself before reading the book, as people aren’t aware of the true meaning of happiness. People believe happiness comes from winning awards and buying items. This is true of Millman himself before the realization he come to make in the quote above. Millman realized all of his awards didn’t in fact bring him real happiness as it did not come with the emotion attributed with true happiness. This is shown when Millman says, “I was no happier, no more fulfilled, for all my achievements” (Millman 155).

Having just come of the best bar routine of his life, instead of being exuberant with happiness, his world is crumbling to pieces around him. Millman finally figures out that everything he thought made him happy was false. He found out everything that he attributed to making him unreasonably happy in life, such as gymnastics, did not fulfill him anymore. Millman goes on to say his life consists of being, “ busy seeking happiness, not finding it”(Millman 155). After his epiphany, winning is now no long the end all be all of happiness for Millman. This realization Comes from the teachings of “Socrates”. Socrates plays a pivotal role in this book. He teaches Millman very important life lessons and shapes him to be a different man. Socrates uses the philosophical theories and ideas from many great philosophers such as Plato, Descartes, and Nietzsche. These lessons taught by Socrates play a major role in shaping Millman’s journey. After analyzing Millman’s journey in relation to everything I’ve learnt in our course over the semester, I have come to the conclusion that following the path to unreasonable happiness

Millman’s journey on the path of unreasonable happiness directly connects to Plato’s Allegory of the Cave. Dan Millman for years before he was taught by socrates was, “sustained by an illusion” (Millman 155). This shows Millman had been living in an “illusion” his whole life, just as the prisoners in the cave in Plato’s allegory of the cave had. The the cave, the prisoners reality was the shadows of objects passing by on the wall infant of them. This, like what Millman experienced, was an illusion of reality rather than reality itself. The moment on the path to unreasonable happiness. where Millman’s, “illusion was burned to ashes” could be connected to the moment in Plato’s Allegory of the Cave where the imprisoned man from inside the cave takes his first look outside of it into the light, as shown when said, “he will suffer sharp pains…but…when he is approaching nearer to being and his eye is turned towards more real existence, he has a clearer vision” (Millman 155, Plato).

This is the exact moment in Dan’s life where he discoverers that his happiness up until this point is not true happiness as it only made the people around him happy. While Millman giant strides on the path to unreasonable happiness, he never fully understands the “world outside of the cave” in Plato’s Allegory of the Cave until years after college when he meets “Socrates” in the mountains for the first time in years. Socrates explains, “All the peoples of the world…are trapped within the Cave of their own minds. Only those few warriors who see the light, who cut free, surrendering everything, can laugh into eternity” (Millman 196). This is said just prior to Millman trying to pass through the “gate”. The gate symbolizes the threshold of becoming a peaceful warrior. Once he steps through it, he has finally reached being a peaceful warrior. This shows the grave importance of this lesson as it is learnt just before becoming a peaceful warrior.

Dan Millman’s path to unreasonable happiness also correlates with Nietzsche’s views on the “wanderer”. Nietzsche describes a wanderer as, “a traveler towards a final goal… [that] does not exist.”. Dan Millman becomes a “wanderer” as he achieved the one goal he had been working towards, obtaining unreasonable happiness and truly becoming a peaceful warrior. Millman no longer has a goal to strive towards at this point except to find and pass through the “gate” that Socrates talks about. Before Millman would be considered a traveler to Nietzsche because he was striving to, “A long-awaited goal” which he achieved by winning awards through gymnastics and his, “search for victory had finally ended” (Millman 155). Before he enters metaphorical “gate”, Socrates tells Dan that he needs to changes his lifestyle from being a traveler to becoming a wanderer. This is shown when Socrates states, “Life is not suffering; it’s just that you will suffer it, rather than enjoy it, until you let go of your mind’s attachments and just go for the ride freely” (Millman 51). Socrates is basically telling Dan to let life take him where life wants him to go. He is also saying Dan should be happy with what life gives to him instead of following a certain path as a traveler would. This is exactly like the wanderer as the wanderer, “must be something wandering within him, which takes its joy in change and transitoriness”. The whole idea of being a wanderer is to enjoy the journey and not expect the journey to end in a single goal, it is basically one of the core values of what Socrates is trying to teach Millman.

A major hurdle Dan Millman must overcome if he is to complete the path to reasonable unhappiness is being able to distinguish between the mind and the brain. His brain holds all the misconceptions Dan created in his previous outlook go the world. Socrates tells Dan, “The brain and the mind are not the same. The brain is real; the mind isn’t” (Millman 52). Socrates explains to Dan how the mind is basically an illusion, the the one Dan was living before learning his lessons, of your brain fidgeting by taking in all thoughts that come from the subconscious. This viewpoint and lesson goes hand and hand with the philosophical ideals of Descartes. Through the semester we read that Descartes believes the mind and body are different through his wax is wax reading. In this reading Descartes believes that he cant trust his senses due to the fact they continuously deceive him and his mind. The wax that Descartes is observing changes from a solid to a liquid as the wax is heated, but Descartes still knows that it is wax even though his senses have perceived that the was has gone through chemical state change. This is because Descartes’ intelligence knew that the wax had not actually changed into something other than wax (Descartes). This correlates to how Socrates talks about the brain and the mind as in this instance the brain knows that it is wax and is still wax after being heated, but the mind tells us that something has changed which means that it might not be wax anymore.

The path Dan Millman takes to find unreasonable happiness in relation to our course is good. We have learnt to be wanderers and follow life as Nietzsche believes as well as to have an open mind to what might and might not be reality by Plato. Unreasonable happiness is worth acquiring to ultimately become a complete human being. As quoted by Dan Millman in the introductory paragraph, he has “ been sustained by an illusion – happiness through victory”. This shows prior to following the journey to unreasonable happiness his life wasn’t true. His path to finding true happiness has made him whole and truly given more meaning to his life. This proves we should not find false happiness in materialistic things but rather find the inner philosopher inside us and go off the beaten path to find the true meaning of happiness.

People who oppose this statement would believe that Dan Millman was happy before he ever met Socrates, or so he thought, so what would be the point of spending all those years yearning and looking for something you already technically had in your life? My response to this would be that his happiness before, although he had not known it yet was false. So instead of living in a untrue world, why would you want to remain living that way? Yes it may take years to learn but ultimately you come out the other side a complete and happier person. The purpose of life is to become the best person we can, by finding the true meaning of happiness, we would have to tools to do so. This begs the question: why does our society find happiness in materialistic things, rather than seeking the true meaning of happiness? In the end, the ideology of Socrates in Way of the Peaceful Warrior aligns with the views of many of the philosophers that we have discussed in this class especially those of Plato, Nietzsche, and Descartes.

Dan Millman’s The Way of the Peaceful Warrior. (2021, Mar 05). Retrieved from https://papersowl.com/examples/dan-millmans-the-way-of-the-peaceful-warrior/

Concept and Meaning of Life

“Allegory of the Cave” by Plato