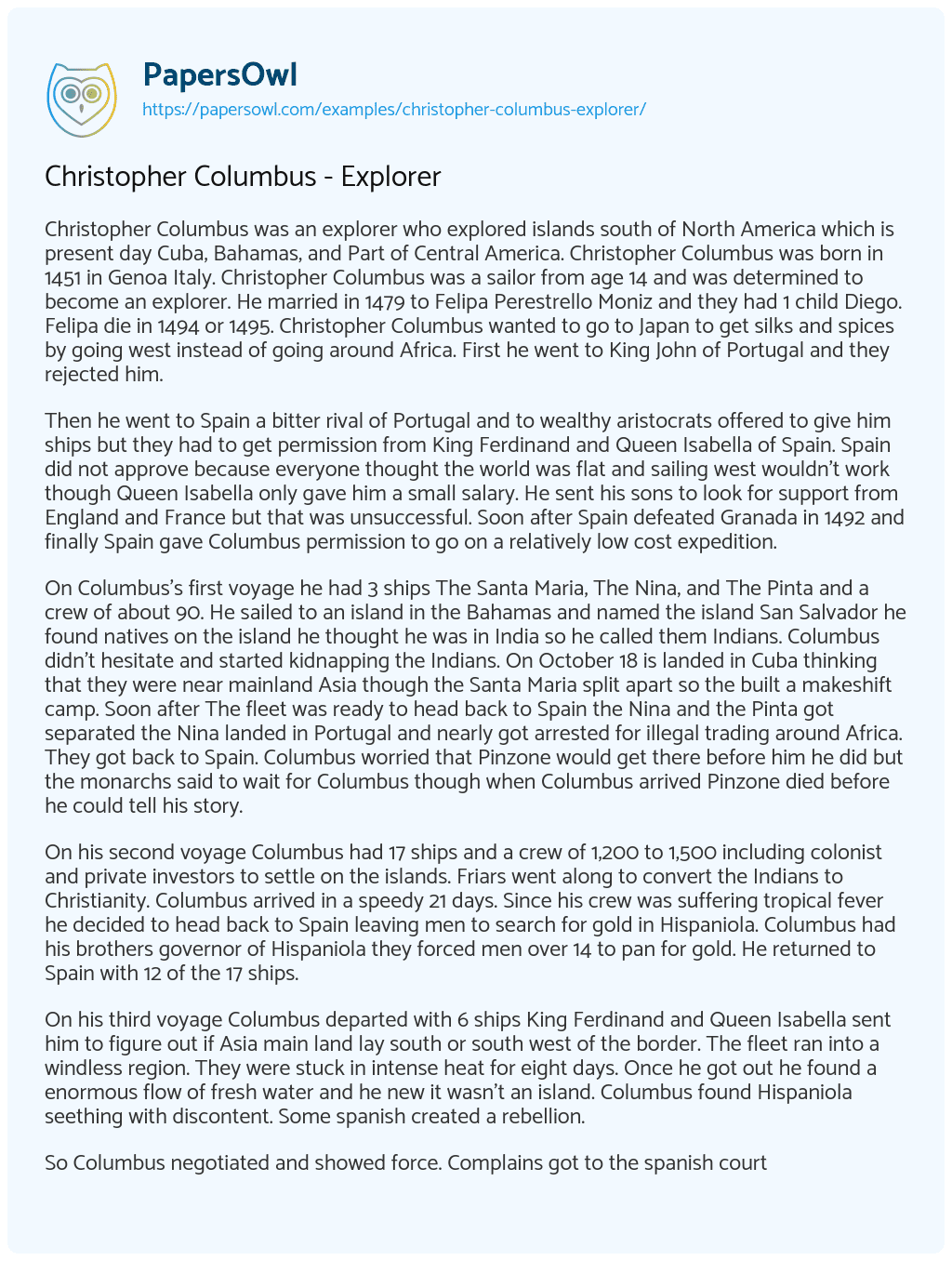 Then he went to Spain a bitter rival of Portugal and to wealthy aristocrats offered to give him ships but they had to get permission from King Ferdinand and Queen Isabella of Spain. Spain did not approve because everyone thought the world was flat and sailing west wouldn’t work though Queen Isabella only gave him a small salary. He sent his sons to look for support from England and France but that was unsuccessful. Soon after Spain defeated Granada in 1492 and finally Spain gave Columbus permission to go on a relatively low cost expedition.

On Columbus’s first voyage he had 3 ships The Santa Maria, The Nina, and The Pinta and a crew of about 90. He sailed to an island in the Bahamas and named the island San Salvador he found natives on the island he thought he was in India so he called them Indians. Columbus didn’t hesitate and started kidnapping the Indians. On October 18 is landed in Cuba thinking that they were near mainland Asia though the Santa Maria split apart so the built a makeshift camp. Soon after The fleet was ready to head back to Spain the Nina and the Pinta got separated the Nina landed in Portugal and nearly got arrested for illegal trading around Africa. They got back to Spain. Columbus worried that Pinzone would get there before him he did but the monarchs said to wait for Columbus though when Columbus arrived Pinzone died before he could tell his story.

On his second voyage Columbus had 17 ships and a crew of 1,200 to 1,500 including colonist and private investors to settle on the islands. Friars went along to convert the Indians to Christianity. Columbus arrived in a speedy 21 days. Since his crew was suffering tropical fever he decided to head back to Spain leaving men to search for gold in Hispaniola. Columbus had his brothers governor of Hispaniola they forced men over 14 to pan for gold. He returned to Spain with 12 of the 17 ships.

On his third voyage Columbus departed with 6 ships King Ferdinand and Queen Isabella sent him to figure out if Asia main land lay south or south west of the border. The fleet ran into a windless region. They were stuck in intense heat for eight days. Once he got out he found a enormous flow of fresh water and he new it wasn’t an island. Columbus found Hispaniola seething with discontent. Some spanish created a rebellion.

So Columbus negotiated and showed force. Complains got to the spanish court about Columbus so they sent a commissioner to see what was going on. He was shocked to see that spanish were in chains so he released them, arrested Columbus, and sent him back to Spain in chains. They monarchs forgave Columbus and with conditions he was aloud to keep his titles but he is not the governor of Hispaniola. They sent Ovando to be the new governor.