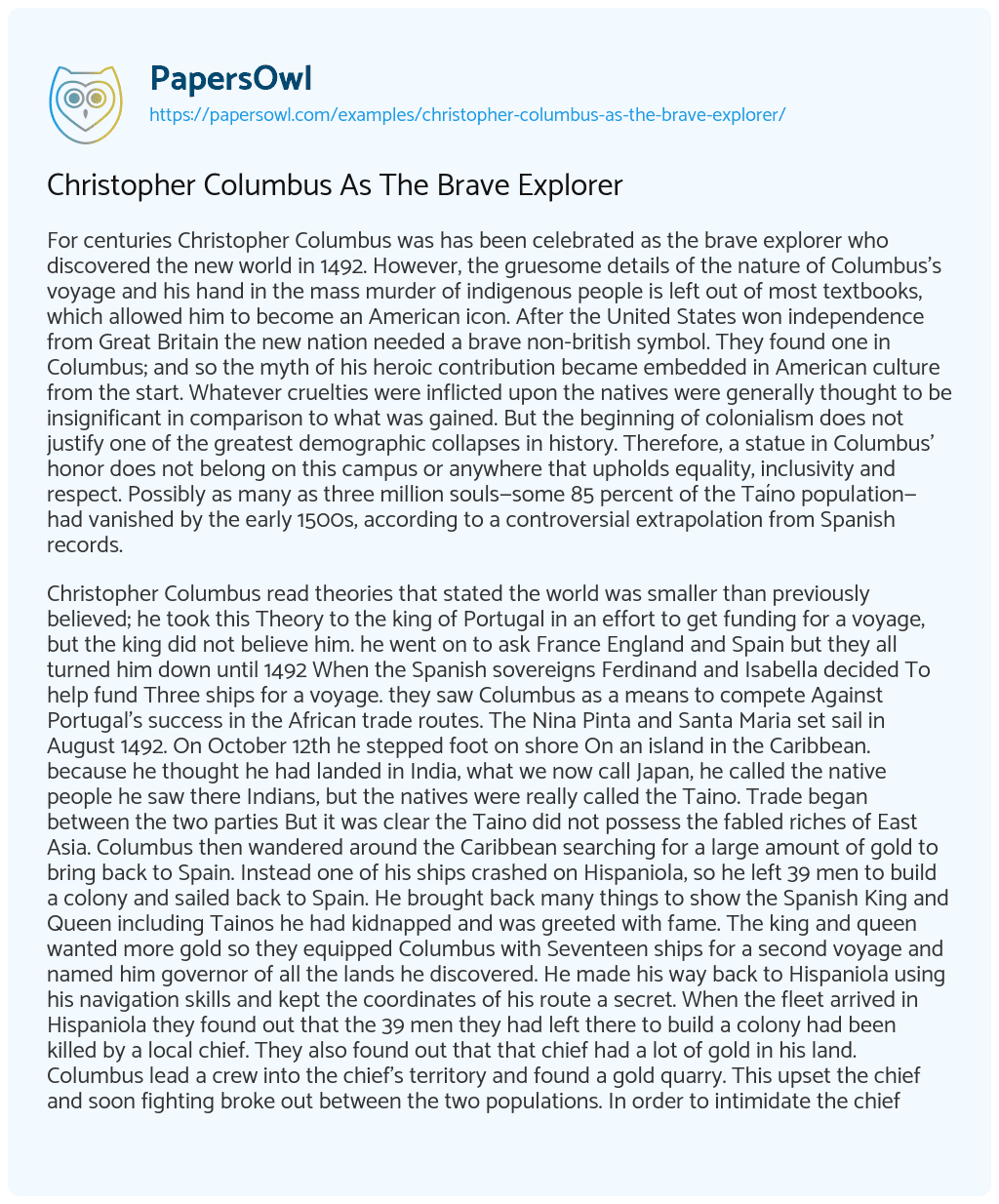 For centuries Christopher Columbus was has been celebrated as the brave explorer who discovered the new world in 1492. However, the gruesome details of the nature of Columbus’s voyage and his hand in the mass murder of indigenous people is left out of most textbooks, which allowed him to become an American icon. After the United States won independence from Great Britain the new nation needed a brave non-british symbol. They found one in Columbus; and so the myth of his heroic contribution became embedded in American culture from the start. Whatever cruelties were inflicted upon the natives were generally thought to be insignificant in comparison to what was gained. But the beginning of colonialism does not justify one of the greatest demographic collapses in history. Therefore, a statue in Columbus’ honor does not belong on this campus or anywhere that upholds equality, inclusivity and respect. Possibly as many as three million souls—some 85 percent of the Taíno population—had vanished by the early 1500s, according to a controversial extrapolation from Spanish records.

Christopher Columbus read theories that stated the world was smaller than previously believed; he took this Theory to the king of Portugal in an effort to get funding for a voyage, but the king did not believe him. he went on to ask France England and Spain but they all turned him down until 1492 When the Spanish sovereigns Ferdinand and Isabella decided To help fund Three ships for a voyage. they saw Columbus as a means to compete Against Portugal’s success in the African trade routes. The Nina Pinta and Santa Maria set sail in August 1492. On October 12th he stepped foot on shore On an island in the Caribbean. because he thought he had landed in India, what we now call Japan, he called the native people he saw there Indians, but the natives were really called the Taino. Trade began between the two parties But it was clear the Taino did not possess the fabled riches of East Asia. Columbus then wandered around the Caribbean searching for a large amount of gold to bring back to Spain. Instead one of his ships crashed on Hispaniola, so he left 39 men to build a colony and sailed back to Spain. He brought back many things to show the Spanish King and Queen including Tainos he had kidnapped and was greeted with fame. The king and queen wanted more gold so they equipped Columbus with Seventeen ships for a second voyage and named him governor of all the lands he discovered. He made his way back to Hispaniola using his navigation skills and kept the coordinates of his route a secret. When the fleet arrived in Hispaniola they found out that the 39 men they had left there to build a colony had been killed by a local chief. They also found out that that chief had a lot of gold in his land. Columbus lead a crew into the chief’s territory and found a gold quarry. This upset the chief and soon fighting broke out between the two populations. In order to intimidate the chief Columbus publicly beheaded three natives. This infuriated the Tainos and even disturbed some of the Spanish. To make matters worse they soon ran out of gold to mine.

Columbus sent letters back to Spain exaggerating the amount of gold that was found. To produce more profit for the king and queen Columbus suggested starting a slave trade and without waiting for a response, he seized over 500 natives and sent them to Spain. Most of the remaining natives fought against this injustice so Columbus unleashed terror on them. Once defeated they were forced to pay tributes of gold to th?e Spanish. Those who did not find enough gold to give the Spanish were punished brutally by cutting off their limbs or killing them. Forced to constantly look for gold, the Taino could no longer farm their lands anymore. Many tried to escape through the hills only to be hunted down by dogs. He even began selling young native girls into sexual slavery. During the first few years of the tribute system 50,000 natives died.

Within months of Columbus’ first landfall in the ‘new world’ Pope Alexander VI issued a Papal edict stating: “The Catholic faith and Christian religion, especially in our times shall be exalted, broadened and spread in every part of the world, salvation shall be sought for all souls, barbarian nations shall be subdued and led back to the faith.” For the gold-hungry Spaniards this divine command quickly became a rationale for centuries of barbaric treatment of native Americans. Columbus himself set the stage on the island of Hispaniola (now Haiti and the Dominican Republic), the site of his first settlement.

Columbus’s brutal command made him enemies in the colony as well as in Europe. The king and queen sent an investigator to Hispaniola to observe the colony and what he found was a disaster. He put Columbus on trial and found him guilty of numerous crimes against both the Spanish and natives. He was arrested and stripped of his title of governor of the new lands.

However, his arrest did not reverse his impact. ?At the time of Columbus’s exploration, the Taíno were the most numerous indigenous people of the Caribbean. By 1550, the Taíno were close to extinction, many having succumbed to diseases brought by the Spaniards.

When The Missionary bartolome De Las Casas Visited the island, he wrote, From 1494 to 1508 Over 3 million People had perished From Slavery the mines, and War. Columbus was ambitious, intelligent and courageous; but he was no hero. His exploits in the colonies were disastrous for the Native inhabitants and their way of life was destroyed by his actions as governor. He was touted as the New World`s pivotal discoverer who subsequently brought civilization to its backward peoples. Whatever hardships and cruelties were inflicted upon the natives was generally thought to be insignificant in comparison with the benefits of European science and religion.

Christopher Columbus As The Brave Explorer. (2021, Apr 03). Retrieved from https://papersowl.com/examples/christopher-columbus-as-the-brave-explorer/