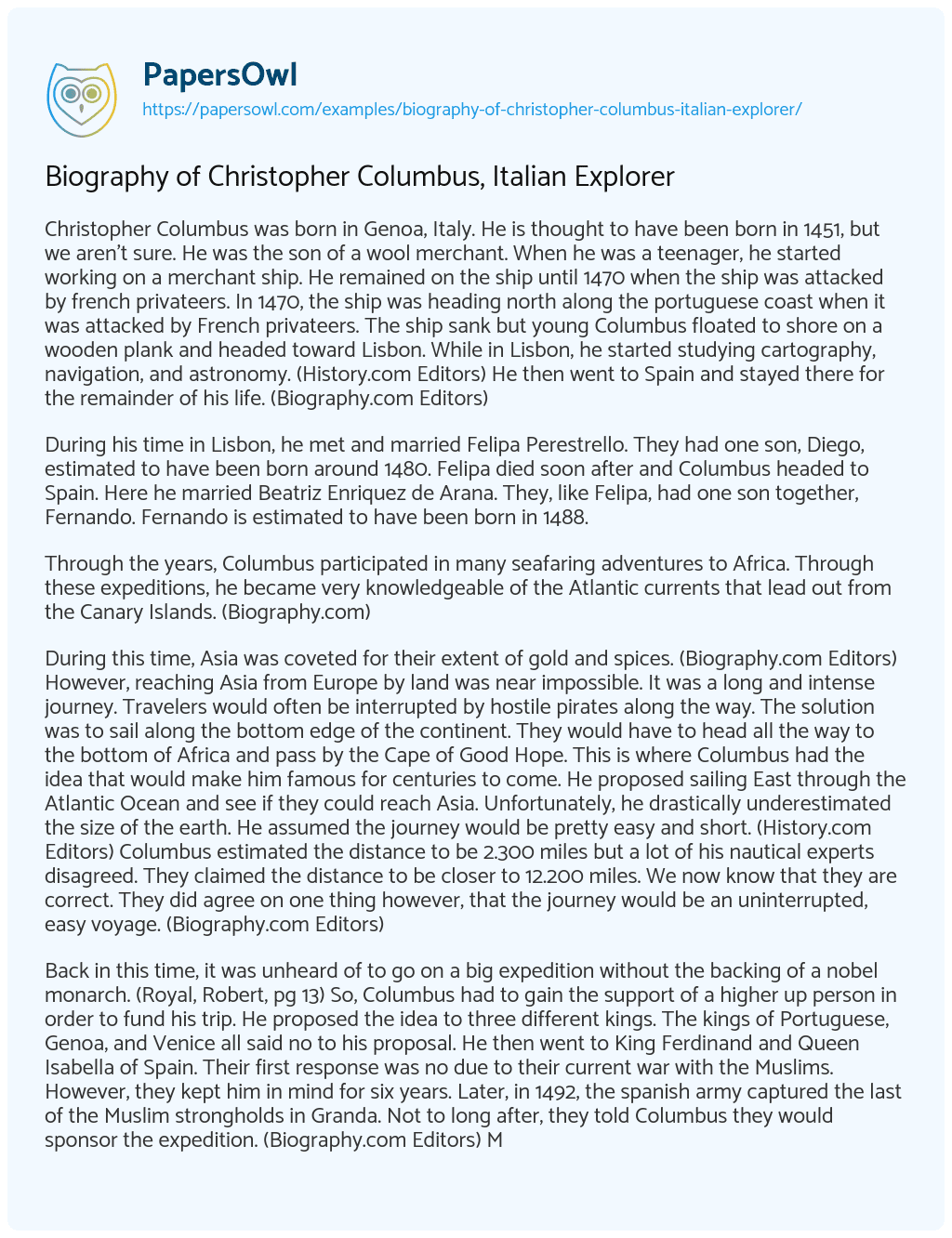 Christopher Columbus was born in Genoa, Italy. He is thought to have been born in 1451, but we aren’t sure. He was the son of a wool merchant. When he was a teenager, he started working on a merchant ship. He remained on the ship until 1470 when the ship was attacked by french privateers. In 1470, the ship was heading north along the portuguese coast when it was attacked by French privateers. The ship sank but young Columbus floated to shore on a wooden plank and headed toward Lisbon. While in Lisbon, he started studying cartography, navigation, and astronomy. (History.com Editors) He then went to Spain and stayed there for the remainder of his life. (Biography.com Editors)

Through the years, Columbus participated in many seafaring adventures to Africa. Through these expeditions, he became very knowledgeable of the Atlantic currents that lead out from the Canary Islands. (Biography.com)

During this time, Asia was coveted for their extent of gold and spices. (Biography.com Editors) However, reaching Asia from Europe by land was near impossible. It was a long and intense journey. Travelers would often be interrupted by hostile pirates along the way. The solution was to sail along the bottom edge of the continent. They would have to head all the way to the bottom of Africa and pass by the Cape of Good Hope. This is where Columbus had the idea that would make him famous for centuries to come. He proposed sailing East through the Atlantic Ocean and see if they could reach Asia. Unfortunately, he drastically underestimated the size of the earth. He assumed the journey would be pretty easy and short. (History.com Editors) Columbus estimated the distance to be 2.300 miles but a lot of his nautical experts disagreed. They claimed the distance to be closer to 12.200 miles. We now know that they are correct. They did agree on one thing however, that the journey would be an uninterrupted, easy voyage. (Biography.com Editors)

Back in this time, it was unheard of to go on a big expedition without the backing of a nobel monarch. (Royal, Robert, pg 13) So, Columbus had to gain the support of a higher up person in order to fund his trip. He proposed the idea to three different kings. The kings of Portuguese, Genoa, and Venice all said no to his proposal. He then went to King Ferdinand and Queen Isabella of Spain. Their first response was no due to their current war with the Muslims. However, they kept him in mind for six years. Later, in 1492, the spanish army captured the last of the Muslim strongholds in Granda. Not to long after, they told Columbus they would sponsor the expedition. (Biography.com Editors) Many people believe that Christopher Columbus did the expedition to prove the earth was spherical. However, most people during this time already accepted the earth as being round. In fact, most people in the Greco-Roman world had accepted this as fact. Many other myths were created about Columbus in the years to come. (Royal, Robert, pg 11)

Columbus was given 3 ships to bring with him on his journey. One being the santa MAria, which was a ship called a carrack. This is the ship Columbus rode on. Their were also the Pinta and the Niña. Both being smaller, Portuguese caravels. HE set off from port Palos de la Frontera. (Biography.com Editors) The ships hit land on OCtober 12, 1492. For the next few months, Him and his crew made their way across the now known Caribbean islands. They were in search of “pearls, precious stones, gold, silver, spices, and other objects and merchandise whatsoever” of which he had promised to his crew. (History.com Editors) What he did discover, however, were relatively friendly natives who were open to trade with the foreigners. Some of the traded items included parrots, beads, spears, and cotton. The spaniards also noticed that the natives wore some gold accents across their garments. He also headed up to what is now Cuba, thinking it to be mainland China. He also thought of Hispania as being some part of Japan. The Santa Maria had actually been wrecked off the shore. He, along with his crew and some of the natives, salvaged what they could and made a new settlement, known as Villa de la Navidad, the Christmas Town. Months later, after not finding what he had expected, he left 40 men behind for them to start a settlement on what is now Hispaniola. Columbus, being defeated, headed back to Spain with the remaining two ships. (Biography.com Editors)

Columbus then returned the next year and found that the settlements had been destroyed and all the people were killed. To this day, it is uncertain was happened to the settlements. He left his two brothers, Bartolomeu and Diego, behind to make a new settlement. Columbus then left and returned a few years later, only to find that his brothers were slaughtered and a revolt had taken place. Columbus was stripped of his authority and sent back to Spain in chains. The settlers convicted him of lying and abandoning them there. Later in 1502, Columbus had been pardoned of most crimes. He went to the king to ask for one last voyage to the new world. The king accepted and Columbus actually made it all the way to Panama, but two of his four ships were destroyed by hostile natives. He gave up his expeditions and retired in Spain. He died later in 1506. (HIstory.com Editors)

In the end, Christopher Columbus played a huge roll in the discovery and settlement of America. It’s a shame he died after being convicted of fraud and abandonment. Without his ambition we may not be here today.