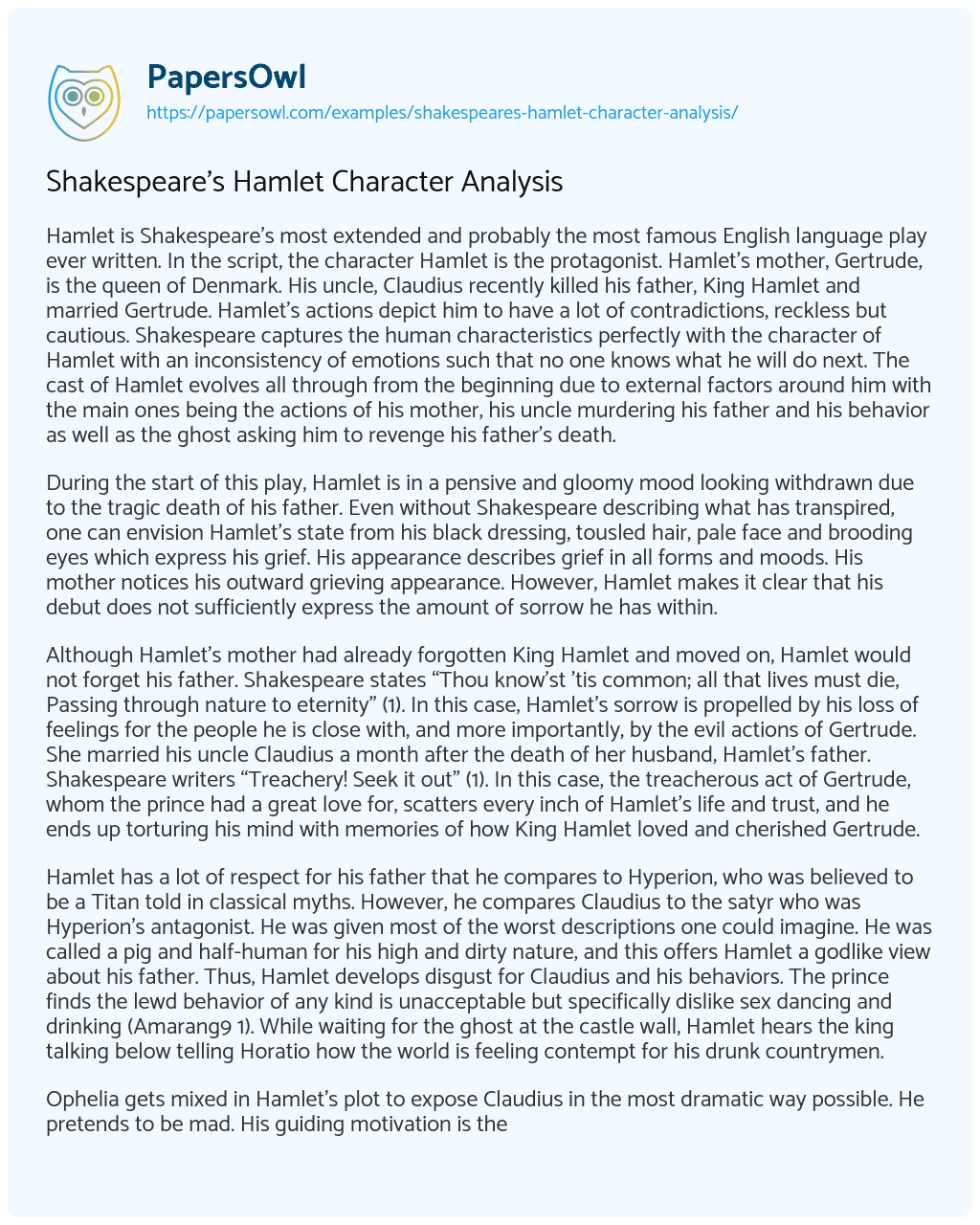 Hamlet is Shakespeare’s most extended and probably the most famous English language play ever written. In the script, the character Hamlet is the protagonist. Hamlet’s mother, Gertrude, is the queen of Denmark. His uncle, Claudius recently killed his father, King Hamlet and married Gertrude. Hamlet’s actions depict him to have a lot of contradictions, reckless but cautious. Shakespeare captures the human characteristics perfectly with the character of Hamlet with an inconsistency of emotions such that no one knows what he will do next. The cast of Hamlet evolves all through from the beginning due to external factors around him with the main ones being the actions of his mother, his uncle murdering his father and his behavior as well as the ghost asking him to revenge his father’s death.

During the start of this play, Hamlet is in a pensive and gloomy mood looking withdrawn due to the tragic death of his father. Even without Shakespeare describing what has transpired, one can envision Hamlet’s state from his black dressing, tousled hair, pale face and brooding eyes which express his grief. His appearance describes grief in all forms and moods. His mother notices his outward grieving appearance. However, Hamlet makes it clear that his debut does not sufficiently express the amount of sorrow he has within.

Although Hamlet’s mother had already forgotten King Hamlet and moved on, Hamlet would not forget his father. Shakespeare states “Thou know’st ’tis common; all that lives must die, Passing through nature to eternity” (1). In this case, Hamlet’s sorrow is propelled by his loss of feelings for the people he is close with, and more importantly, by the evil actions of Gertrude. She married his uncle Claudius a month after the death of her husband, Hamlet’s father. Shakespeare writers “Treachery! Seek it out” (1). In this case, the treacherous act of Gertrude, whom the prince had a great love for, scatters every inch of Hamlet’s life and trust, and he ends up torturing his mind with memories of how King Hamlet loved and cherished Gertrude.

Hamlet has a lot of respect for his father that he compares to Hyperion, who was believed to be a Titan told in classical myths. However, he compares Claudius to the satyr who was Hyperion’s antagonist. He was given most of the worst descriptions one could imagine. He was called a pig and half-human for his high and dirty nature, and this offers Hamlet a godlike view about his father. Thus, Hamlet develops disgust for Claudius and his behaviors. The prince finds the lewd behavior of any kind is unacceptable but specifically dislike sex dancing and drinking (Amarang9 1). While waiting for the ghost at the castle wall, Hamlet hears the king talking below telling Horatio how the world is feeling contempt for his drunk countrymen.

Ophelia gets mixed in Hamlet’s plot to expose Claudius in the most dramatic way possible. He pretends to be mad. His guiding motivation is the conscious trait of an over-thinking philosopher. His pretense extends the drama as if Hamlet is writing the play himself. In the process, Hamlet hurts Ophelia’s feelings. However, Hamlet’s attitudes towards women have been tainted by Gertrude and Claudius’ actions. Hamlet’s love for Ophelia can be seen through the gifts and letters he used to give to her before his father’s death. While trying to become his father’s mouthpiece about how he could not chastise his wife, his love for Ophelia diminishes (Mabillard 1). He begins to treat her with cruelty and thus destroys her.

Hamlet is unable to control his feelings and thoughts. At one instance he hates Ophelia, but in the next, he wants to engage into sexual intimacy with her. Although it may seem as if Hamlet is crazy; he is not lost in his madness façade. He is only using Ophelia to further the pretense and make it look as if he is insane. In some instances, he doesn’t lash out at Ophelia but uses some hurtful words and shows her disrespectful behavior. Hamlet should be blamed for mistreating Ophelia. Although lucid and brilliant, Hamlet is driven by his rage for Gertrude’s betrayal into destroying the innocent Ophelia. He uses Ophelia as a tool to expose his hostile behavior which he hides from Claudius. Hamlets affection for Ophelia is only seen when he realizes she has died and is freed from woman trappings.

Hamlet has a burning desire to embrace those he despises beneath his cruelty and cynic nature. He loved his mother and wanted to feel the love again. He confronts Gertrude and relents that the spirit needs to intercede for her, but it is clear he longs to show her some affection and comfort each other. However, his love and friendship cannot outdo his depressions and the responsibility of revenge. There is a possibility that Hamlet has an oedipal complex in which he identifies with Claudius’ crime (Amarang9 1). It is the unconscious desire of sons wanting to kill their fathers and become their mothers’ objects of affection. However, His faith in humanity is already destroyed, and at some time he contemplates suicide.

Hamlet’s possibility of getting happiness and normalcy is tarnished by the appearance of his father’s ghost which demands him to seek revenge. Although he longs to see his uncle paying for the crimes he committed, hamlet sees killing a king as an evil act. The ghost is asking him to murder Claudius, something he stands against. Hamlet hates Claudius for his actions of treachery, but to him, the position of committing murder is unnatural to him (Mabillard 1). Therefore, Hamlet takes more time before doing his revenge. In the play, however, it seems like a short time but several months have elapsed since his meeting with the ghost. He prays alone in his chambers for the perfect time to come when he avenges his father.

?The prince’s perpetual introspection helps him overcome his anxiety when he comes back from exile. He is different that is a calm nature, he is rational in reasoning, and he is not afraid of death (Shakespeare 1). He realizes that destiny controls all lives and is ready to face the truth of murdering while avenging his father. He uses fate as a scapegoat to distance himself from the killing of King Claudius. With this climax of philosophy, Hamlet has prepared himself for death. Even after his death, his prince qualities remain with imprints in the minds of the audience. He is a soldier and brave.

In summary, Hamlet may be described as an intelligent, melancholy, brooding and a philosopher who manipulates the people around him by manipulating his behavior. He understands his psychological state after his actions affect the people, he loves such as Ophelia dying. He is a brilliant character with most of his practices being acts rather than his true nature.

The Female Identities in Shakespeare’s Hamlet