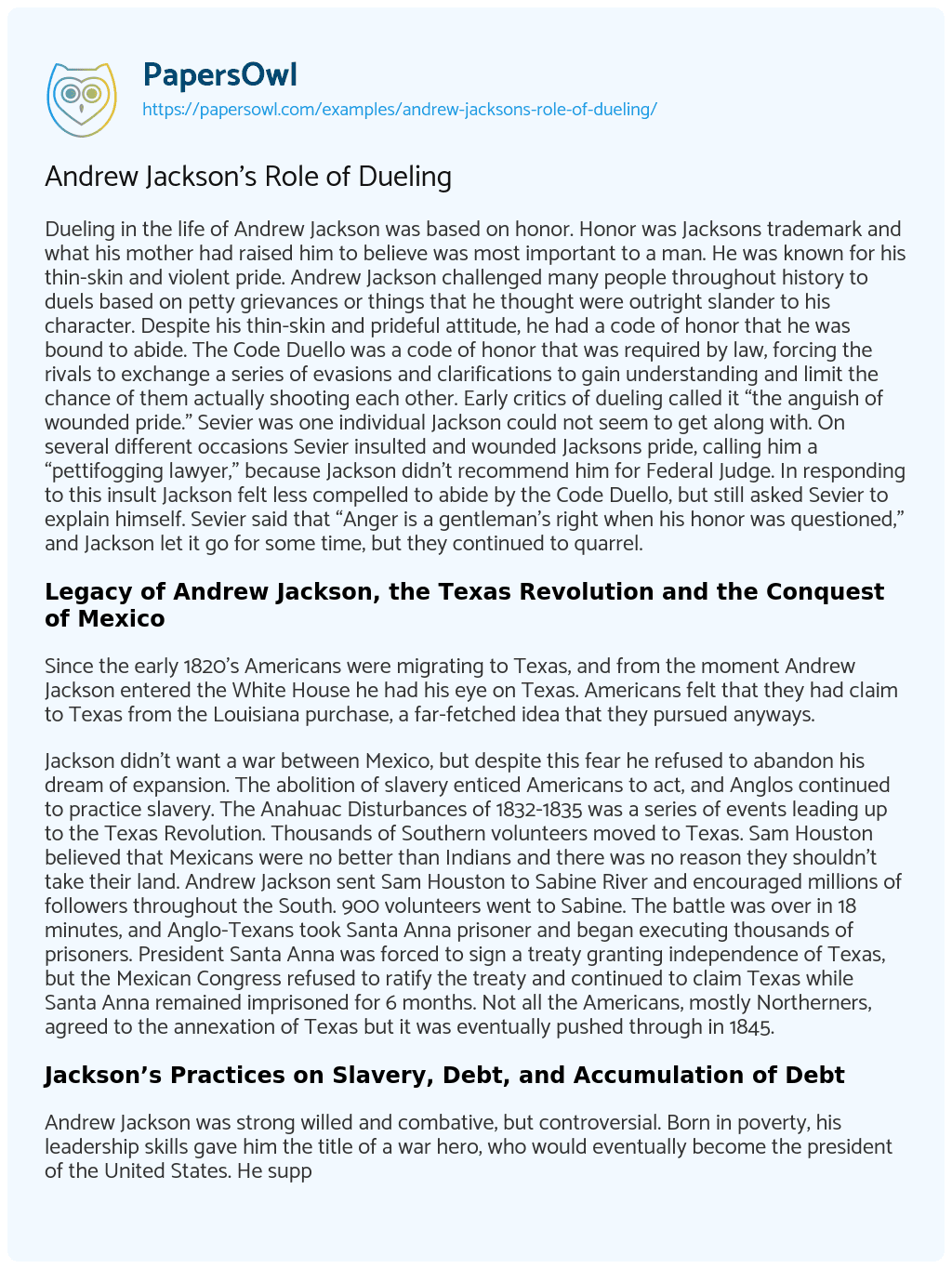 Dueling in the life of Andrew Jackson was based on honor. Honor was Jacksons trademark and what his mother had raised him to believe was most important to a man. He was known for his thin-skin and violent pride. Andrew Jackson challenged many people throughout history to duels based on petty grievances or things that he thought were outright slander to his character. Despite his thin-skin and prideful attitude, he had a code of honor that he was bound to abide. The Code Duello was a code of honor that was required by law, forcing the rivals to exchange a series of evasions and clarifications to gain understanding and limit the chance of them actually shooting each other. Early critics of dueling called it “the anguish of wounded pride.” Sevier was one individual Jackson could not seem to get along with. On several different occasions Sevier insulted and wounded Jacksons pride, calling him a “pettifogging lawyer,” because Jackson didn’t recommend him for Federal Judge. In responding to this insult Jackson felt less compelled to abide by the Code Duello, but still asked Sevier to explain himself. Sevier said that “Anger is a gentleman’s right when his honor was questioned,” and Jackson let it go for some time, but they continued to quarrel.

Legacy of Andrew Jackson, the Texas Revolution and the Conquest of Mexico

Since the early 1820’s Americans were migrating to Texas, and from the moment Andrew Jackson entered the White House he had his eye on Texas. Americans felt that they had claim to Texas from the Louisiana purchase, a far-fetched idea that they pursued anyways.

Jackson didn’t want a war between Mexico, but despite this fear he refused to abandon his dream of expansion. The abolition of slavery enticed Americans to act, and Anglos continued to practice slavery. The Anahuac Disturbances of 1832-1835 was a series of events leading up to the Texas Revolution. Thousands of Southern volunteers moved to Texas. Sam Houston believed that Mexicans were no better than Indians and there was no reason they shouldn’t take their land. Andrew Jackson sent Sam Houston to Sabine River and encouraged millions of followers throughout the South. 900 volunteers went to Sabine. The battle was over in 18 minutes, and Anglo-Texans took Santa Anna prisoner and began executing thousands of prisoners. President Santa Anna was forced to sign a treaty granting independence of Texas, but the Mexican Congress refused to ratify the treaty and continued to claim Texas while Santa Anna remained imprisoned for 6 months. Not all the Americans, mostly Northerners, agreed to the annexation of Texas but it was eventually pushed through in 1845.

Jackson’s Practices on Slavery, Debt, and Accumulation of Debt

Andrew Jackson was strong willed and combative, but controversial. Born in poverty, his leadership skills gave him the title of a war hero, who would eventually become the president of the United States. He supported slavery and fought for states’ rights.

Jackson became president by beating John Quincey Adams, having many accomplishments. He paid off the countries debt and started vetoing bills as a matter of policy. He started a bank that led to economic hardships but eventually turned around and began to become a way of regulating the Nations money – producing a good economy. He began realizing the important role of the United States economy and changed the currency to a paper money system and began paying soldiers with it who eventually had difficulty spending it. His legacy is tarnished by a few controversial topics. He forced the relocation of Native Americans, also known as “The Trail of Tears,” resulting in the deaths of thousands. Jackson’s agenda was very clear from the beginning of his presidency. He wanted to remove Indians from their western territories, annexation of Texas, defending of plantation slavery and the economy, and stopping what he considered as abuses by the federal government. When Jackson began enforcing the Indian Removal Act it was strongly opposed by Northerners, who also opposed the annexation of slavery due to the addition of another slave state. When he did this Jackson became a major enemy of the Indians, African Americans, and Mexicans.

Andrew Jackson, Philip Sheridan, and George Armstrong Custer held the same attitude toward Native Americans as much of the other Americans in their time. Manifest Destiny was the idea that Americans have a God given right to expand and conquer less civilized people, including Indians, Africans, and Mexican’s.

Jackson made his agenda clear from the beginning and enacted many policies that benefited one group of people while exploiting another. Jackson enforced the Indian Removal Act and created the Trail of Tears which eventually led to the deaths of thousands of Native Americans. Philip Sheridan was a general chief of the United States army who was known as a war hero but committed a number of atrocities at The Battle of Potomac, and The Battle of Wounded Knee. He held strategic raids on Natives, ordered the destruction of crops, burned villages, and captured livestock. George Armstrong Custer participated in much of the same activities, including raids, and even fought alongside Sheridan. These were all men who had political power and one agenda, to take land from Natives for Americans.”