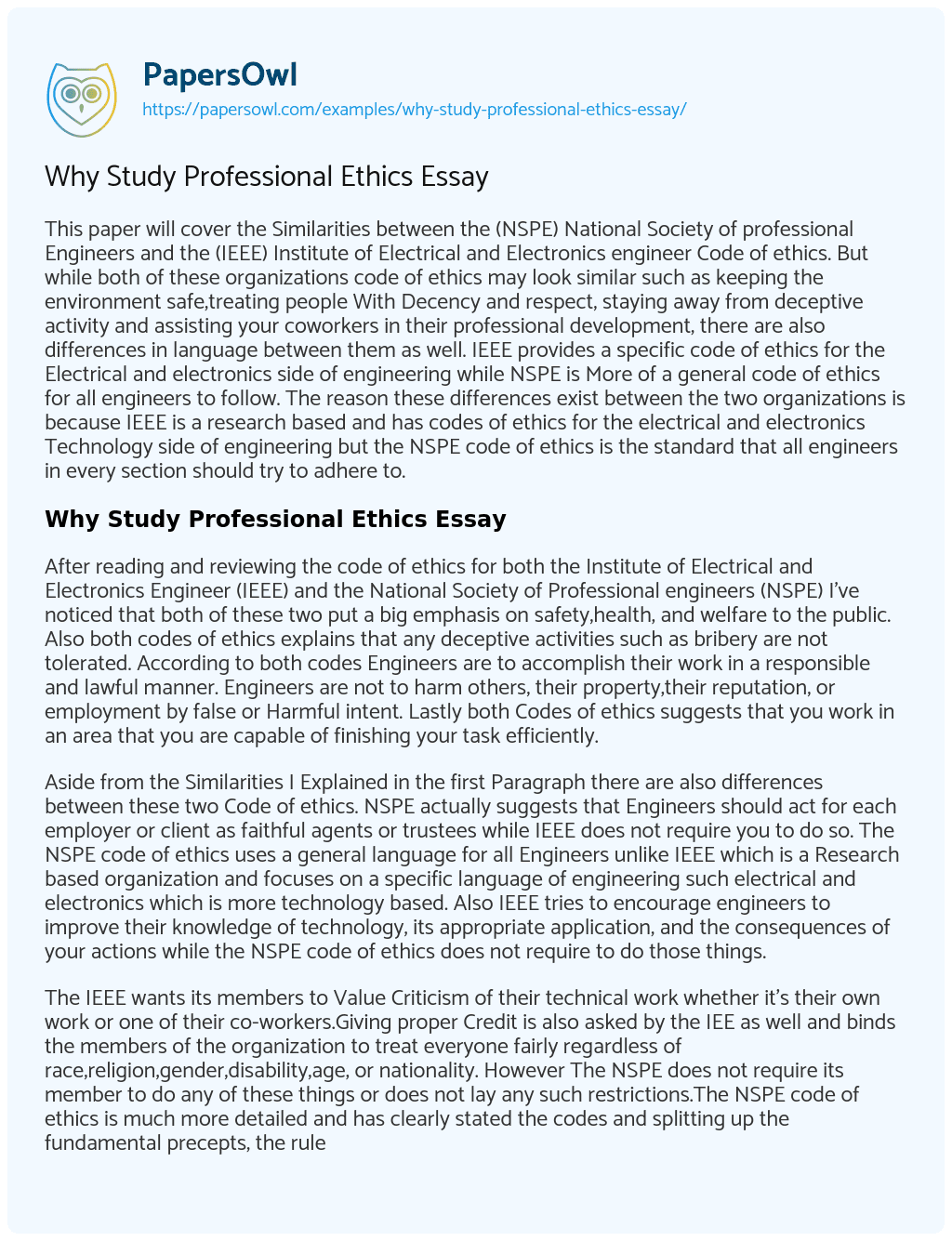 This paper will cover the Similarities between the (NSPE) National Society of professional Engineers and the (IEEE) Institute of Electrical and Electronics engineer Code of ethics. But while both of these organizations code of ethics may look similar such as keeping the environment safe,treating people With Decency and respect, staying away from deceptive activity and assisting your coworkers in their professional development, there are also differences in language between them as well. IEEE provides a specific code of ethics for the Electrical and electronics side of engineering while NSPE is More of a general code of ethics for all engineers to follow. The reason these differences exist between the two organizations is because IEEE is a research based and has codes of ethics for the electrical and electronics Technology side of engineering but the NSPE code of ethics is the standard that all engineers in every section should try to adhere to.

After reading and reviewing the code of ethics for both the Institute of Electrical and Electronics Engineer (IEEE) and the National Society of Professional engineers (NSPE) I’ve noticed that both of these two put a big emphasis on safety,health, and welfare to the public. Also both codes of ethics explains that any deceptive activities such as bribery are not tolerated. According to both codes Engineers are to accomplish their work in a responsible and lawful manner. Engineers are not to harm others, their property,their reputation, or employment by false or Harmful intent. Lastly both Codes of ethics suggests that you work in an area that you are capable of finishing your task efficiently.

Aside from the Similarities I Explained in the first Paragraph there are also differences between these two Code of ethics. NSPE actually suggests that Engineers should act for each employer or client as faithful agents or trustees while IEEE does not require you to do so. The NSPE code of ethics uses a general language for all Engineers unlike IEEE which is a Research based organization and focuses on a specific language of engineering such electrical and electronics which is more technology based. Also IEEE tries to encourage engineers to improve their knowledge of technology, its appropriate application, and the consequences of your actions while the NSPE code of ethics does not require to do those things.

The IEEE wants its members to Value Criticism of their technical work whether it’s their own work or one of their co-workers.Giving proper Credit is also asked by the IEE as well and binds the members of the organization to treat everyone fairly regardless of race,religion,gender,disability,age, or nationality. However The NSPE does not require its member to do any of these things or does not lay any such restrictions.The NSPE code of ethics is much more detailed and has clearly stated the codes and splitting up the fundamental precepts, the rules of practice, and professional responsibilities. The IEEE code of ethics looks sort of like an oath where you say it in first person while The NSPE is formed more in third person language and encourages all engineers to adhere to their code of ethics.

Why Study Professional Ethics Essay. (2019, May 14). Retrieved from https://papersowl.com/examples/why-study-professional-ethics-essay/

Ethics and the Business Professional