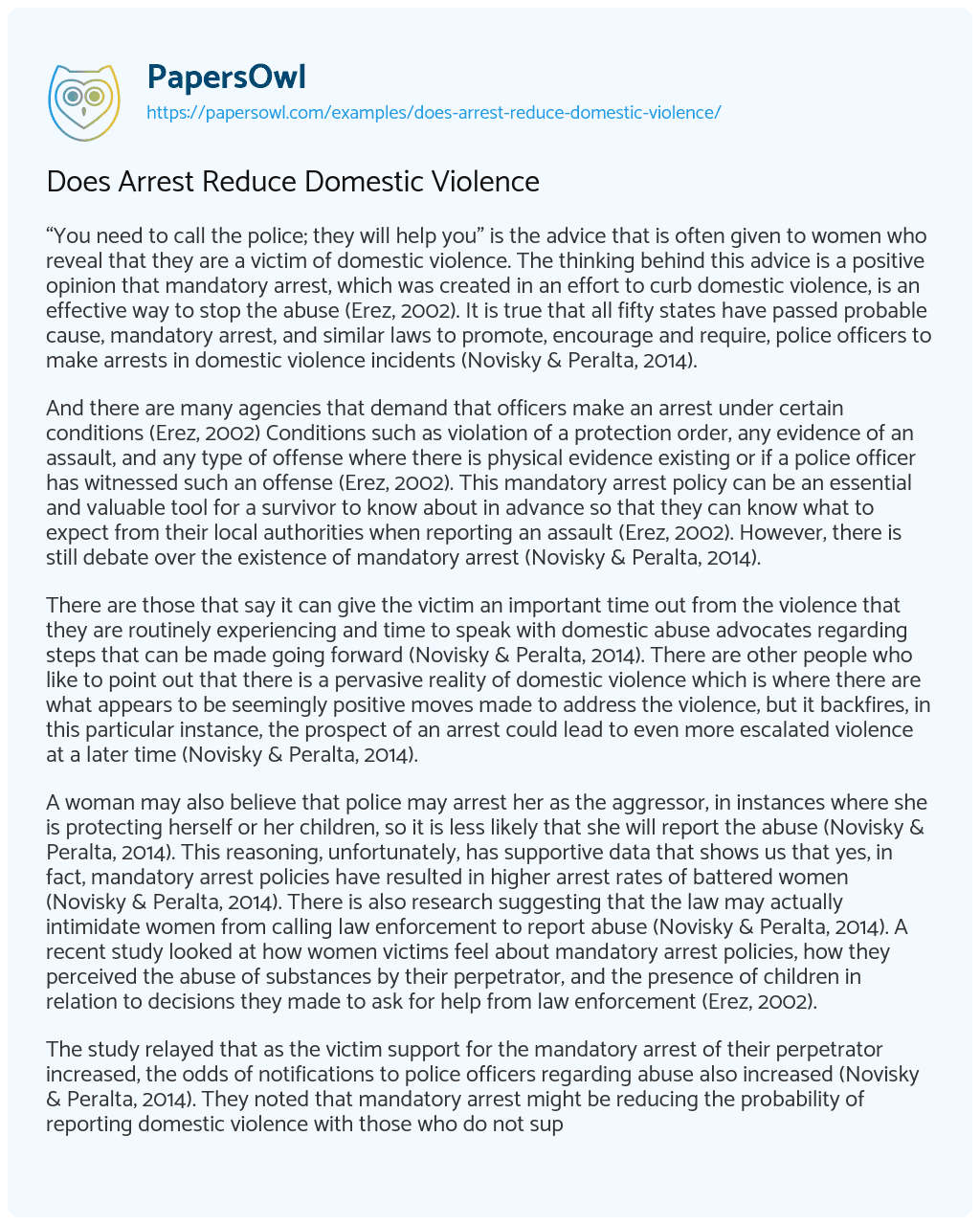 “You need to call the police; they will help you” is the advice that is often given to women who reveal that they are a victim of domestic violence. The thinking behind this advice is a positive opinion that mandatory arrest, which was created in an effort to curb domestic violence, is an effective way to stop the abuse (Erez, 2002). It is true that all fifty states have passed probable cause, mandatory arrest, and similar laws to promote, encourage and require, police officers to make arrests in domestic violence incidents (Novisky & Peralta, 2014).

And there are many agencies that demand that officers make an arrest under certain conditions (Erez, 2002) Conditions such as violation of a protection order, any evidence of an assault, and any type of offense where there is physical evidence existing or if a police officer has witnessed such an offense (Erez, 2002). This mandatory arrest policy can be an essential and valuable tool for a survivor to know about in advance so that they can know what to expect from their local authorities when reporting an assault (Erez, 2002). However, there is still debate over the existence of mandatory arrest (Novisky & Peralta, 2014).

There are those that say it can give the victim an important time out from the violence that they are routinely experiencing and time to speak with domestic abuse advocates regarding steps that can be made going forward (Novisky & Peralta, 2014). There are other people who like to point out that there is a pervasive reality of domestic violence which is where there are what appears to be seemingly positive moves made to address the violence, but it backfires, in this particular instance, the prospect of an arrest could lead to even more escalated violence at a later time (Novisky & Peralta, 2014).

A woman may also believe that police may arrest her as the aggressor, in instances where she is protecting herself or her children, so it is less likely that she will report the abuse (Novisky & Peralta, 2014). This reasoning, unfortunately, has supportive data that shows us that yes, in fact, mandatory arrest policies have resulted in higher arrest rates of battered women (Novisky & Peralta, 2014). There is also research suggesting that the law may actually intimidate women from calling law enforcement to report abuse (Novisky & Peralta, 2014). A recent study looked at how women victims feel about mandatory arrest policies, how they perceived the abuse of substances by their perpetrator, and the presence of children in relation to decisions they made to ask for help from law enforcement (Erez, 2002).