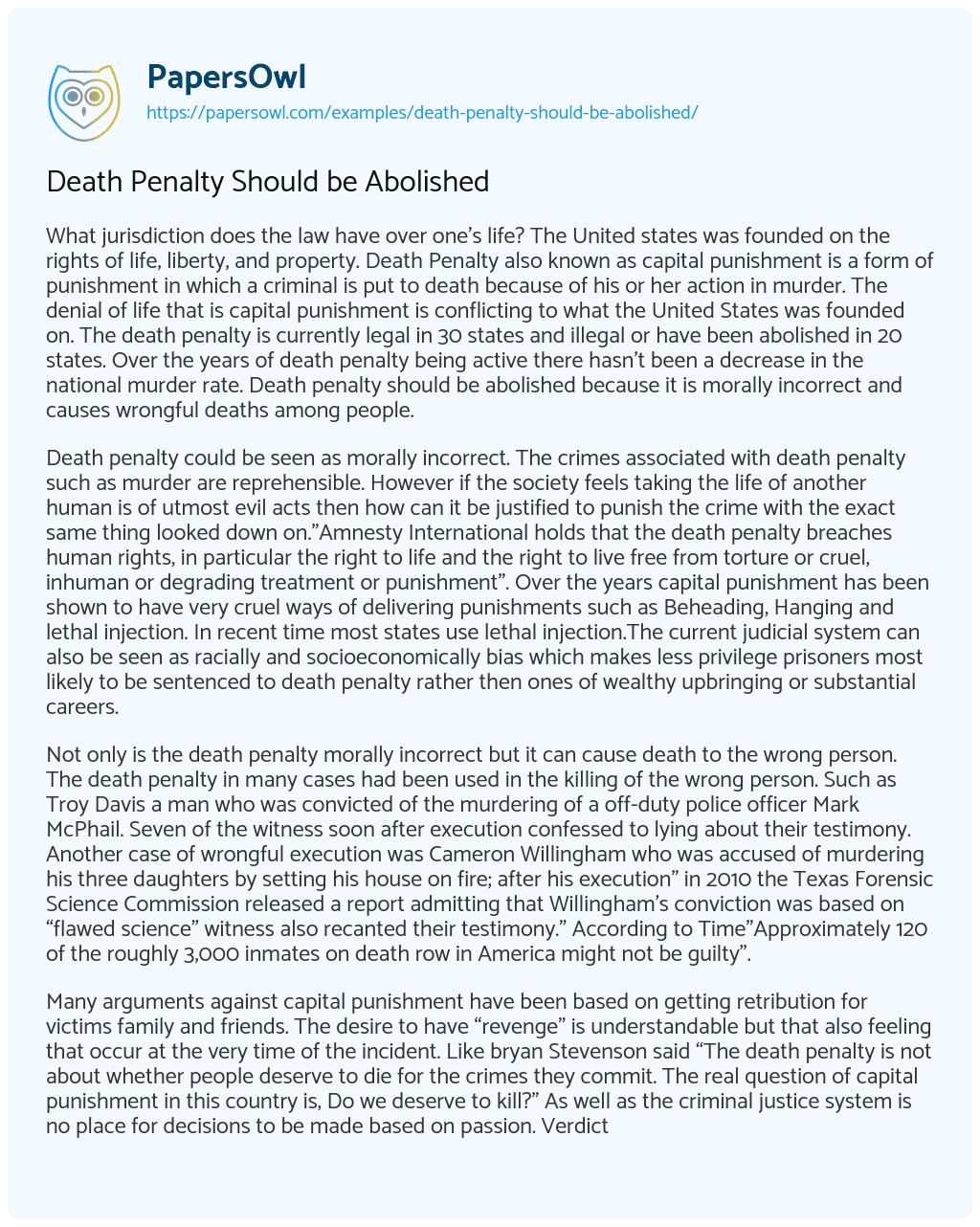 What jurisdiction does the law have over one’s life? The United states was founded on the rights of life, liberty, and property. Death Penalty also known as capital punishment is a form of punishment in which a criminal is put to death because of his or her action in murder. The denial of life that is capital punishment is conflicting to what the United States was founded on. The death penalty is currently legal in 30 states and illegal or have been abolished in 20 states. Over the years of death penalty being active there hasn’t been a decrease in the national murder rate. Death penalty should be abolished because it is morally incorrect and causes wrongful deaths among people.

Death penalty could be seen as morally incorrect. The crimes associated with death penalty such as murder are reprehensible. However if the society feels taking the life of another human is of utmost evil acts then how can it be justified to punish the crime with the exact same thing looked down on.”Amnesty International holds that the death penalty breaches human rights, in particular the right to life and the right to live free from torture or cruel, inhuman or degrading treatment or punishment”. Over the years capital punishment has been shown to have very cruel ways of delivering punishments such as Beheading, Hanging and lethal injection. In recent time most states use lethal injection.The current judicial system can also be seen as racially and socioeconomically bias which makes less privilege prisoners most likely to be sentenced to death penalty rather then ones of wealthy upbringing or substantial careers.

Not only is the death penalty morally incorrect but it can cause death to the wrong person. The death penalty in many cases had been used in the killing of the wrong person. Such as Troy Davis a man who was convicted of the murdering of a off-duty police officer Mark McPhail. Seven of the witness soon after execution confessed to lying about their testimony. Another case of wrongful execution was Cameron Willingham who was accused of murdering his three daughters by setting his house on fire; after his execution” in 2010 the Texas Forensic Science Commission released a report admitting that Willingham’s conviction was based on “flawed science” witness also recanted their testimony.” According to Time”Approximately 120 of the roughly 3,000 inmates on death row in America might not be guilty”.

Many arguments against capital punishment have been based on getting retribution for victims family and friends. The desire to have “revenge” is understandable but that also feeling that occur at the very time of the incident. Like bryan Stevenson said “The death penalty is not about whether people deserve to die for the crimes they commit. The real question of capital punishment in this country is, Do we deserve to kill?” As well as the criminal justice system is no place for decisions to be made based on passion. Verdicts should be made from trails based on factual evidence. Though losing a loved one to a crime is a very traumatic thing getting revenge cannot lead to healing.

The use of capital punishment and or death penalty should be abolished based on the fact that no one should get their lives taken from them based on the decision of someone else. Reasons such as wrongful execution and judicial bias showing there’s a lot of flaws in the system dealing with the lives of many.

Death Penalty Should be Abolished. (2021, Apr 12). Retrieved from https://papersowl.com/examples/death-penalty-should-be-abolished/