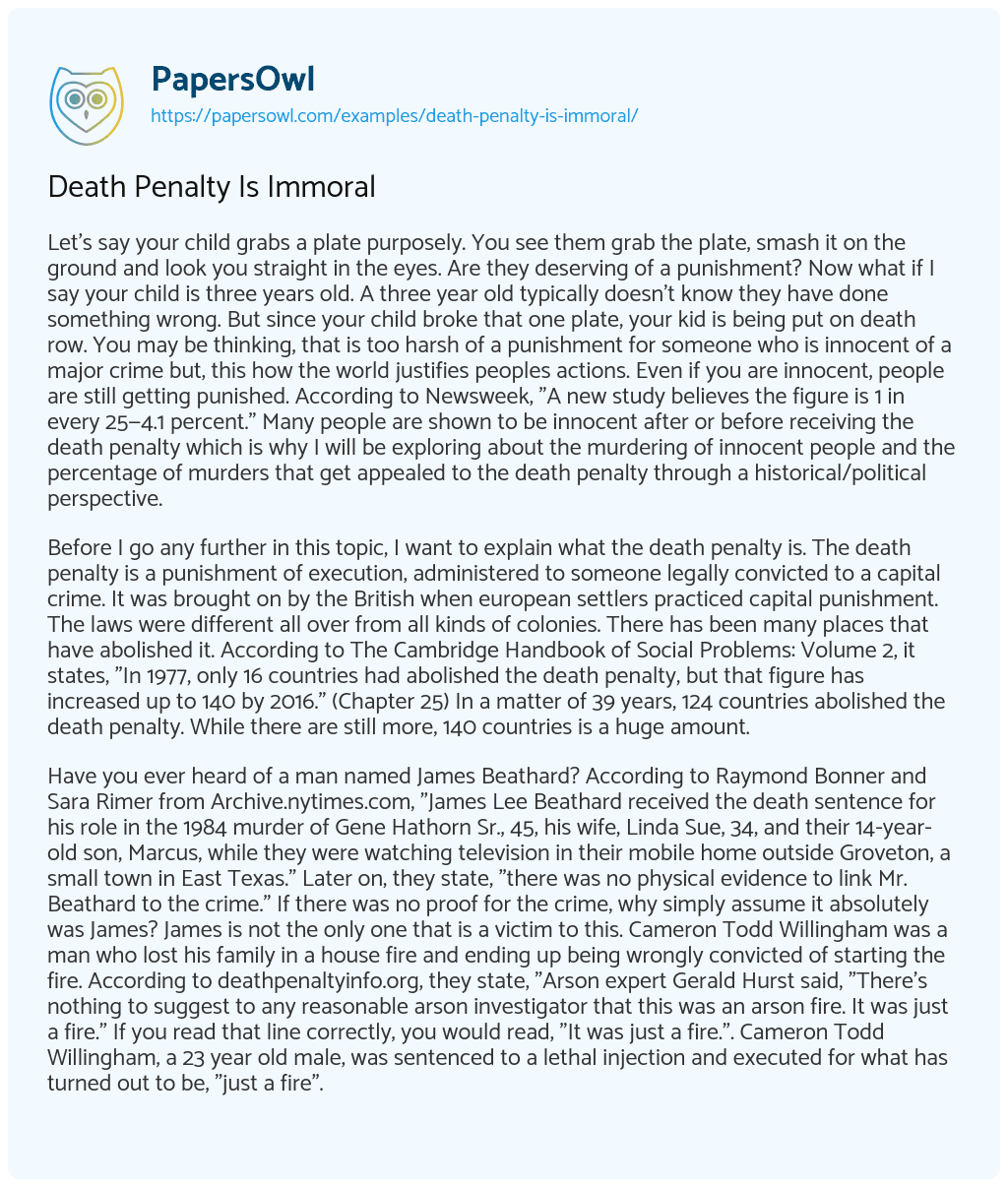 Let’s say your child grabs a plate purposely. You see them grab the plate, smash it on the ground and look you straight in the eyes. Are they deserving of a punishment? Now what if I say your child is three years old. A three year old typically doesn’t know they have done something wrong. But since your child broke that one plate, your kid is being put on death row. You may be thinking, that is too harsh of a punishment for someone who is innocent of a major crime but, this how the world justifies peoples actions. Even if you are innocent, people are still getting punished. According to Newsweek, “A new study believes the figure is 1 in every 25—4.1 percent.” Many people are shown to be innocent after or before receiving the death penalty which is why I will be exploring about the murdering of innocent people and the percentage of murders that get appealed to the death penalty through a historical/political perspective.

Before I go any further in this topic, I want to explain what the death penalty is. The death penalty is a punishment of execution, administered to someone legally convicted to a capital crime. It was brought on by the British when european settlers practiced capital punishment. The laws were different all over from all kinds of colonies. There has been many places that have abolished it. According to The Cambridge Handbook of Social Problems: Volume 2, it states, “In 1977, only 16 countries had abolished the death penalty, but that figure has increased up to 140 by 2016.” (Chapter 25) In a matter of 39 years, 124 countries abolished the death penalty. While there are still more, 140 countries is a huge amount.

Have you ever heard of a man named James Beathard? According to Raymond Bonner and Sara Rimer from Archive.nytimes.com, “James Lee Beathard received the death sentence for his role in the 1984 murder of Gene Hathorn Sr., 45, his wife, Linda Sue, 34, and their 14-year-old son, Marcus, while they were watching television in their mobile home outside Groveton, a small town in East Texas.” Later on, they state, “there was no physical evidence to link Mr. Beathard to the crime.” If there was no proof for the crime, why simply assume it absolutely was James? James is not the only one that is a victim to this. Cameron Todd Willingham was a man who lost his family in a house fire and ending up being wrongly convicted of starting the fire. According to deathpenaltyinfo.org, they state, “Arson expert Gerald Hurst said, “There’s nothing to suggest to any reasonable arson investigator that this was an arson fire. It was just a fire.” If you read that line correctly, you would read, “It was just a fire.”. Cameron Todd Willingham, a 23 year old male, was sentenced to a lethal injection and executed for what has turned out to be, “just a fire”.

Cost of the Death Penalty