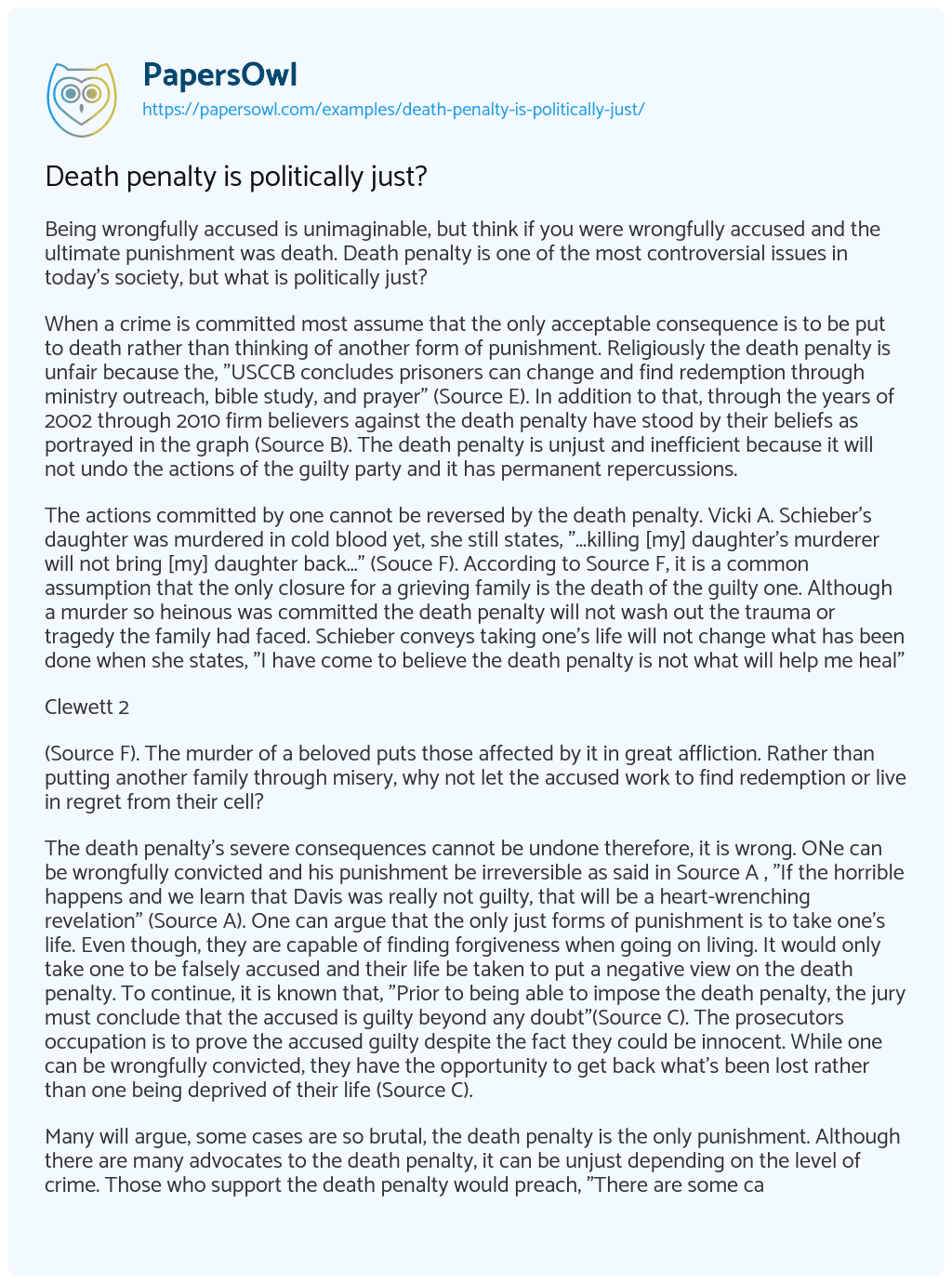 When a crime is committed most assume that the only acceptable consequence is to be put to death rather than thinking of another form of punishment. Religiously the death penalty is unfair because the, “USCCB concludes prisoners can change and find redemption through ministry outreach, bible study, and prayer” (Source E). In addition to that, through the years of 2002 through 2010 firm believers against the death penalty have stood by their beliefs as portrayed in the graph (Source B). The death penalty is unjust and inefficient because it will not undo the actions of the guilty party and it has permanent repercussions.

The actions committed by one cannot be reversed by the death penalty. Vicki A. Schieber’s daughter was murdered in cold blood yet, she still states, “…killing [my] daughter’s murderer will not bring [my] daughter back…” (Souce F). According to Source F, it is a common assumption that the only closure for a grieving family is the death of the guilty one. Although a murder so heinous was committed the death penalty will not wash out the trauma or tragedy the family had faced. Schieber conveys taking one’s life will not change what has been done when she states, “I have come to believe the death penalty is not what will help me heal”

(Source F). The murder of a beloved puts those affected by it in great affliction. Rather than putting another family through misery, why not let the accused work to find redemption or live in regret from their cell?

The death penalty’s severe consequences cannot be undone therefore, it is wrong. ONe can be wrongfully convicted and his punishment be irreversible as said in Source A , “If the horrible happens and we learn that Davis was really not guilty, that will be a heart-wrenching revelation” (Source A). One can argue that the only just forms of punishment is to take one’s life. Even though, they are capable of finding forgiveness when going on living. It would only take one to be falsely accused and their life be taken to put a negative view on the death penalty. To continue, it is known that, “Prior to being able to impose the death penalty, the jury must conclude that the accused is guilty beyond any doubt”(Source C). The prosecutors occupation is to prove the accused guilty despite the fact they could be innocent. While one can be wrongfully convicted, they have the opportunity to get back what’s been lost rather than one being deprived of their life (Source C).

Many will argue, some cases are so brutal, the death penalty is the only punishment. Although there are many advocates to the death penalty, it can be unjust depending on the level of crime. Those who support the death penalty would preach, “There are some cases that are so heinous and brutal that society must impose it as the ultimate penalty”(Source D). Those against this punishment can concur what was done cannot be justified, but death will not be the solution. The most heinous and brutal crimes bring the greatest trauma, which will not perish when threatened with the ultimate punishment.

The death penalty is unjust because it doesn’t take back the crime that has been committed and has unimaginable consequences. Think if it was your son or daughter who was being tried, what if they were going to be put on death row? Many many argue that the accused deserves only death, rather than believing in redemption.