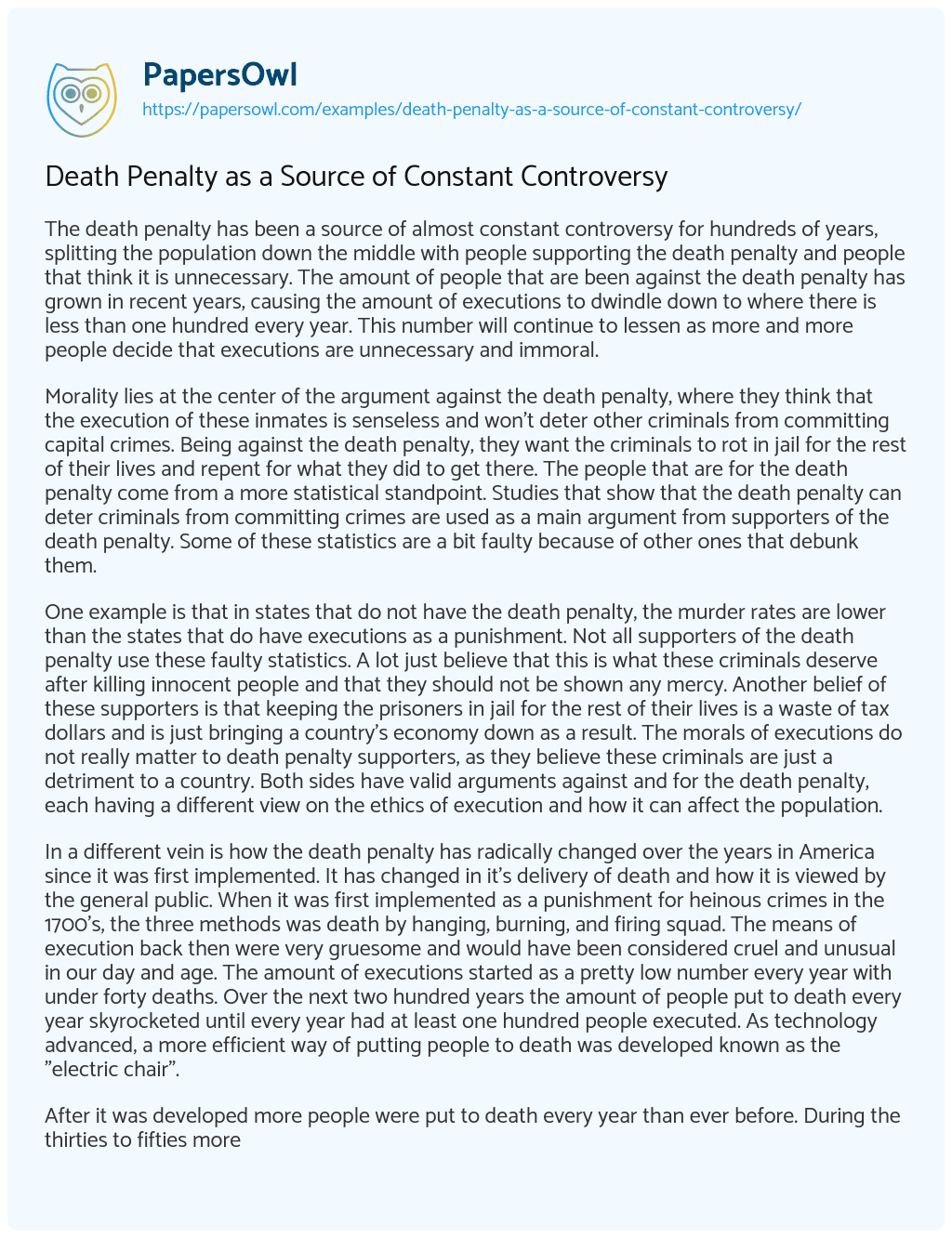 The death penalty has been a source of almost constant controversy for hundreds of years, splitting the population down the middle with people supporting the death penalty and people that think it is unnecessary. The amount of people that are been against the death penalty has grown in recent years, causing the amount of executions to dwindle down to where there is less than one hundred every year. This number will continue to lessen as more and more people decide that executions are unnecessary and immoral.

One example is that in states that do not have the death penalty, the murder rates are lower than the states that do have executions as a punishment. Not all supporters of the death penalty use these faulty statistics. A lot just believe that this is what these criminals deserve after killing innocent people and that they should not be shown any mercy. Another belief of these supporters is that keeping the prisoners in jail for the rest of their lives is a waste of tax dollars and is just bringing a country’s economy down as a result. The morals of executions do not really matter to death penalty supporters, as they believe these criminals are just a detriment to a country. Both sides have valid arguments against and for the death penalty, each having a different view on the ethics of execution and how it can affect the population.

In a different vein is how the death penalty has radically changed over the years in America since it was first implemented. It has changed in it’s delivery of death and how it is viewed by the general public. When it was first implemented as a punishment for heinous crimes in the 1700’s, the three methods was death by hanging, burning, and firing squad. The means of execution back then were very gruesome and would have been considered cruel and unusual in our day and age. The amount of executions started as a pretty low number every year with under forty deaths. Over the next two hundred years the amount of people put to death every year skyrocketed until every year had at least one hundred people executed. As technology advanced, a more efficient way of putting people to death was developed known as the “electric chair”.

After this period of the death penalty not happening, the method of execution known as lethal injection was developed. This method was shown to be more humane than any other execution method because of how painless it is for the inmate. The years after it was developed, executions in the United States haven’t gone over one hundred due to anti-death penalty sentiment growing. In the present day, as i have previously said, the anti-death penalty sentiment is widespread in the United States discouraging the government from putting too many people to death.

Death Penalty as a Source of Constant Controversy. (2019, Nov 17). Retrieved from https://papersowl.com/examples/death-penalty-as-a-source-of-constant-controversy/

The History of the Death Penalty