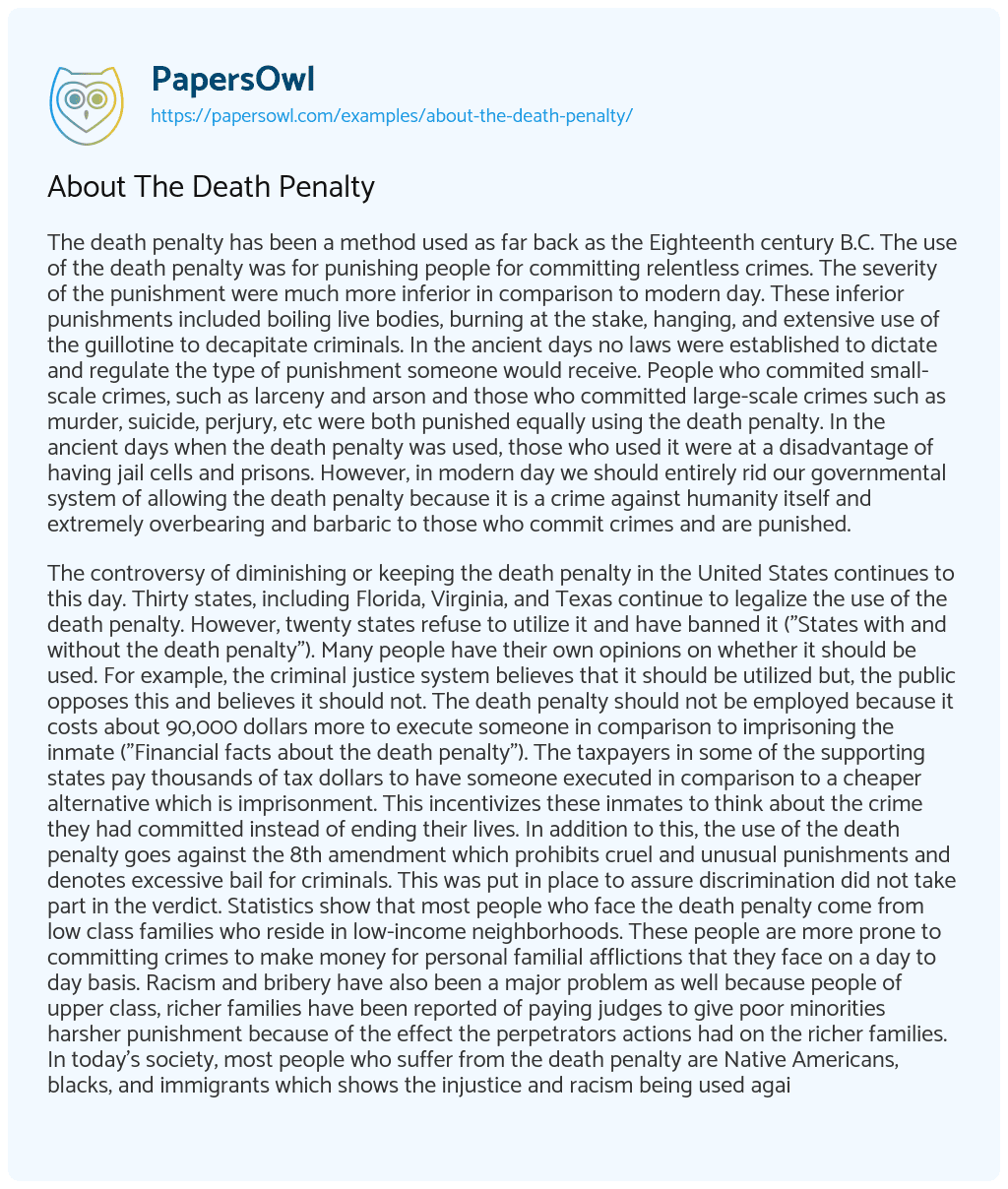 The death penalty has been a method used as far back as the Eighteenth century B.C. The use of the death penalty was for punishing people for committing relentless crimes. The severity of the punishment were much more inferior in comparison to modern day. These inferior punishments included boiling live bodies, burning at the stake, hanging, and extensive use of the guillotine to decapitate criminals. In the ancient days no laws were established to dictate and regulate the type of punishment someone would receive. People who commited small-scale crimes, such as larceny and arson and those who committed large-scale crimes such as murder, suicide, perjury, etc were both punished equally using the death penalty. In the ancient days when the death penalty was used, those who used it were at a disadvantage of having jail cells and prisons. However, in modern day we should entirely rid our governmental system of allowing the death penalty because it is a crime against humanity itself and extremely overbearing and barbaric to those who commit crimes and are punished.

The controversy of diminishing or keeping the death penalty in the United States continues to this day. Thirty states, including Florida, Virginia, and Texas continue to legalize the use of the death penalty. However, twenty states refuse to utilize it and have banned it (“States with and without the death penalty”). Many people have their own opinions on whether it should be used. For example, the criminal justice system believes that it should be utilized but, the public opposes this and believes it should not. The death penalty should not be employed because it costs about 90,000 dollars more to execute someone in comparison to imprisoning the inmate (“Financial facts about the death penalty”). The taxpayers in some of the supporting states pay thousands of tax dollars to have someone executed in comparison to a cheaper alternative which is imprisonment. This incentivizes these inmates to think about the crime they had committed instead of ending their lives. In addition to this, the use of the death penalty goes against the 8th amendment which prohibits cruel and unusual punishments and denotes excessive bail for criminals. This was put in place to assure discrimination did not take part in the verdict. Statistics show that most people who face the death penalty come from low class families who reside in low-income neighborhoods. These people are more prone to committing crimes to make money for personal familial afflictions that they face on a day to day basis. Racism and bribery have also been a major problem as well because people of upper class, richer families have been reported of paying judges to give poor minorities harsher punishment because of the effect the perpetrators actions had on the richer families. In today’s society, most people who suffer from the death penalty are Native Americans, blacks, and immigrants which shows the injustice and racism being used against these groups.

The people who are accused of crimes are not always guilty. An innocent man was charged as a criminal sentenced to twenty years of imprisonment. He was in the process of potentially receiving the death penalty, however, he was a model inmate so they decided not to be intemperate of using the death penalty. Twenty years later, as technology further advanced, they performed a DNA test and came to the conclusion that he was not the perpetrator and set him free. This exploits the wrongful doings that occur when the government utilizes the death penalty. Researchers have calculated the percent error that has amounted of prisoners who have been sentenced to death. They have also come to the conclusion that 4.1% (Death penalty information center”). Although this may not seem a lot, 4.1% is a huge margin when taken into account the amount of prisoners in these facilities. The use of the death penalty will have no severe effect on the number of crimes committed. Although a prisoner may have committed a crime, this doesn’t mean that they don’t have any sympathy for what they did. Many prisoners after serving time turn their whole world around, and become model citizens. In today’s society, this may be hard because people never forget the things a person may or may not have done, but they try their best to fit into society again.

On the other hand, many believe that the death penalty should be used. They believe that the criminal should be punished to the fullest extent of the law. Having the possibility of the prisoner breaking out and striking again is not a risk they’re willing to take, so they believe that killing the prisoner is better and less risky. Many victims who have survived the actions of the perpetrator or know a loved one who has been through a murder or crime believe that the criminal should be killed because they experienced it first hand and went through the emotional trauma that the criminal caused. Many of these people let emotion take over their beliefs by skewing in one direction due to the impact a criminal might have had. Also, people believe that it will decrease the rate of crime by scaring other potential criminals from committing a crime, however, there is no evidence to support this theory. Also, people believe that advances in technology will reduce the amount of people wrongfully accused, so their death won’t create controversy about whether they have the right person. They believe that the person should not have commited the crime if they did not want to deal with the consequences of their actions. Giving up the death penalty would mean giving up justice for the families affected and not giving them the closure they deserve. Immanuel Kant said, “A society that is not willing to demand a life of somebody who has taken somebody else’s life is simply immoral.” (Kozinski, “Should the death penalty be allowed”). Many people agree with him and believe in the saying, “an eye for an eye”. Hence, these are the reasons why people believe the death penalty should be used.

Countries in the middle east are aggressive when it comes to the death penalty and use it more harshly than the United States. A few months ago, two rapists were hung in a public area after raping a 10 year old girl in Pakistan. The government there believed that by hanging him in a public manner, people would be scared to commit the same crime. There is no evidence that shows public executions being factors that decrease the amount of crimes committed (“Introduction to the death penalty”). The country with the most executions is China with over 1000 executions in 2017 (“The death penalty: An international perspective”). The United States learned about the death penalty when colonizers settled here and brought their ideas with them. The first recorded execution in America took place in 1608 involving a spy from Spain. Different colonies had different laws regarding the use and severity of the death penalty. Many abolitionists were against the use of death as a punishment and felt that there was no justification for a state to take a life.

About The Death Penalty. (2019, Apr 05). Retrieved from https://papersowl.com/examples/about-the-death-penalty/

The Death Penalty and Juveniles