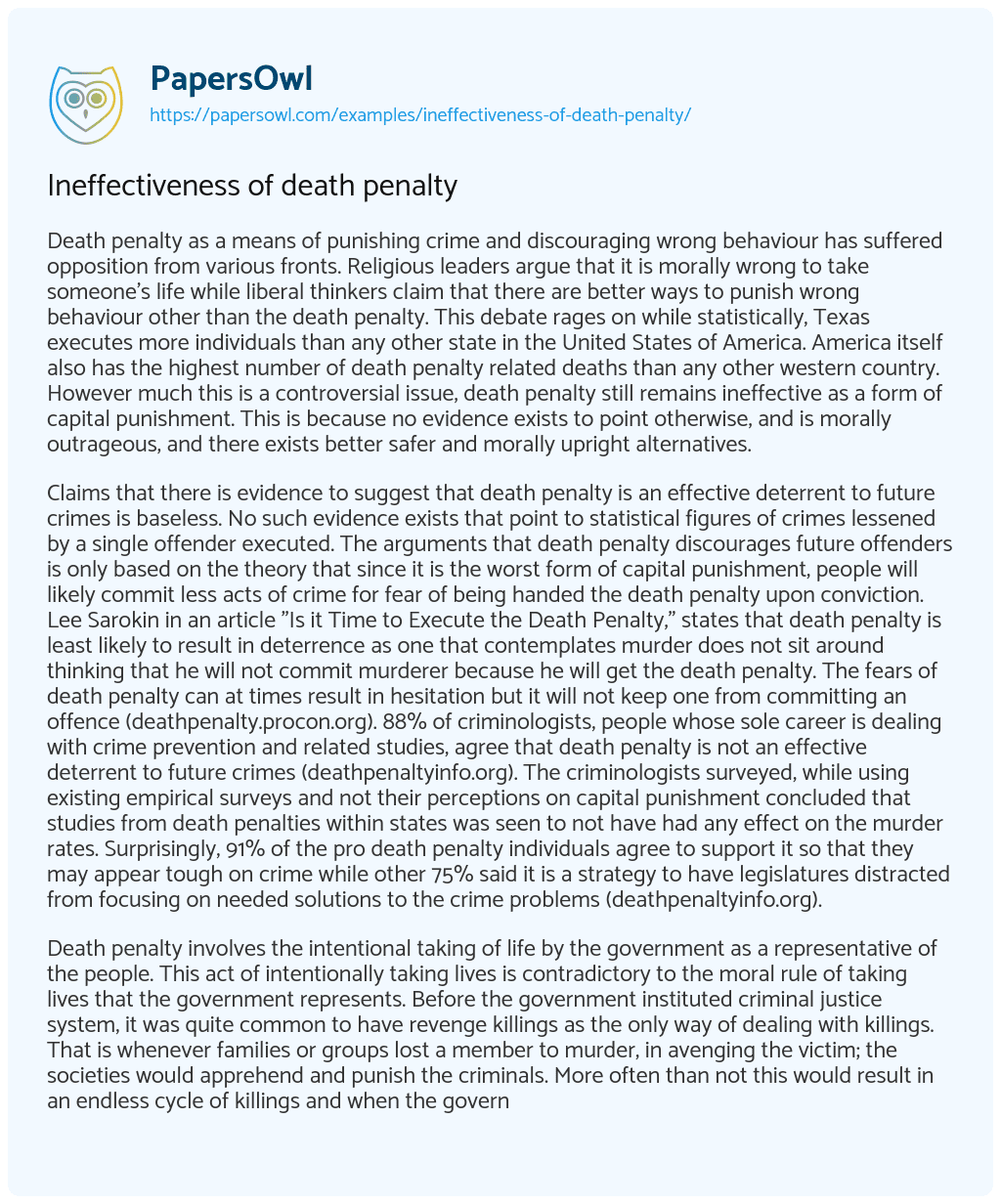 Death penalty as a means of punishing crime and discouraging wrong behaviour has suffered opposition from various fronts. Religious leaders argue that it is morally wrong to take someone’s life while liberal thinkers claim that there are better ways to punish wrong behaviour other than the death penalty. This debate rages on while statistically, Texas executes more individuals than any other state in the United States of America. America itself also has the highest number of death penalty related deaths than any other western country. However much this is a controversial issue, death penalty still remains ineffective as a form of capital punishment. This is because no evidence exists to point otherwise, and is morally outrageous, and there exists better safer and morally upright alternatives.

Claims that there is evidence to suggest that death penalty is an effective deterrent to future crimes is baseless. No such evidence exists that point to statistical figures of crimes lessened by a single offender executed. The arguments that death penalty discourages future offenders is only based on the theory that since it is the worst form of capital punishment, people will likely commit less acts of crime for fear of being handed the death penalty upon conviction. Lee Sarokin in an article “Is it Time to Execute the Death Penalty,” states that death penalty is least likely to result in deterrence as one that contemplates murder does not sit around thinking that he will not commit murderer because he will get the death penalty. The fears of death penalty can at times result in hesitation but it will not keep one from committing an offence (deathpenalty.procon.org). 88% of criminologists, people whose sole career is dealing with crime prevention and related studies, agree that death penalty is not an effective deterrent to future crimes (deathpenaltyinfo.org). The criminologists surveyed, while using existing empirical surveys and not their perceptions on capital punishment concluded that studies from death penalties within states was seen to not have had any effect on the murder rates. Surprisingly, 91% of the pro death penalty individuals agree to support it so that they may appear tough on crime while other 75% said it is a strategy to have legislatures distracted from focusing on needed solutions to the crime problems (deathpenaltyinfo.org).

Death penalty involves the intentional taking of life by the government as a representative of the people. This act of intentionally taking lives is contradictory to the moral rule of taking lives that the government represents. Before the government instituted criminal justice system, it was quite common to have revenge killings as the only way of dealing with killings. That is whenever families or groups lost a member to murder, in avenging the victim; the societies would apprehend and punish the criminals. More often than not this would result in an endless cycle of killings and when the government came into the picture it had to institute a law that would punish criminals in relation to the seriousness of the crimes committed. So naturally, nothing short of death was expected for horrific murders. Though satisfying the need for justice on the part of those that have lost the people they love to vicious killers, the rule of not killing people is weakened by the same statute of death penalty (Columbia.edu). If at all the government was keen on keeping its moral stand on disagreeing with the intentional killing of people, then it would have sought after an alternative means of punishing wrong behaviour.

The fact that there exist better and morally sound alternatives to punishing morally wrong behaviour makes the death penalty wrong and ineffective. Life without parole is a safer less alternative that is being argued for. It is a long and harrowing experience for an offender to stay in isolation and locked up without contact with the society. Such offenders will most likely suffer from their crimes while locked up having no chance of getting out than when their life is ended without them having to suffer for the pain they inflicted on others. It has been noted that individuals that are locked up usually have a higher chance of breaking and confessing their ways even mending their ways than those who know that they are locked up for a short period before being executed. People’s changing attitudes towards the issue of death penalty tends to suggest that they are starting to see the insignificance of this method of capital punishment. Although numerous polls have shown that a significant percentage of Americans have supported the death penalty for more than 40 years, results from a 2013 Gallup poll show that these figures have dwindled (journals.sagepub.com). The dwindling support may be because of the bodies of evidences that have surfaced over the past couple of decades that disagrees with the death penalty. Successive generations have also witnessed the increase in people championing for the abolishment of the death penalty citing the cruelty to human life.

In conclusion, death penalty is a controversial topic because it involves death of an individual. People are split along the lines of having those that are the worst offenders paying for their crimes through death or having the same individuals be punished in an alternative way. From a moral standpoint, death penalty is wrong yet the government that discourages the intentional killing of another is actively involved in pursuing the death penalty. Additionally, death penalty from statistics and empirical evidence is not a sure deterrent to future crimes. Crimes still continues unabated even with thousands killed through lethal injection and the like. As people’s attitude change, it is about time that the government looked for alternative ways of punishing serious offenders.

Ineffectiveness of death penalty. (2019, May 16). Retrieved from https://papersowl.com/examples/ineffectiveness-of-death-penalty/