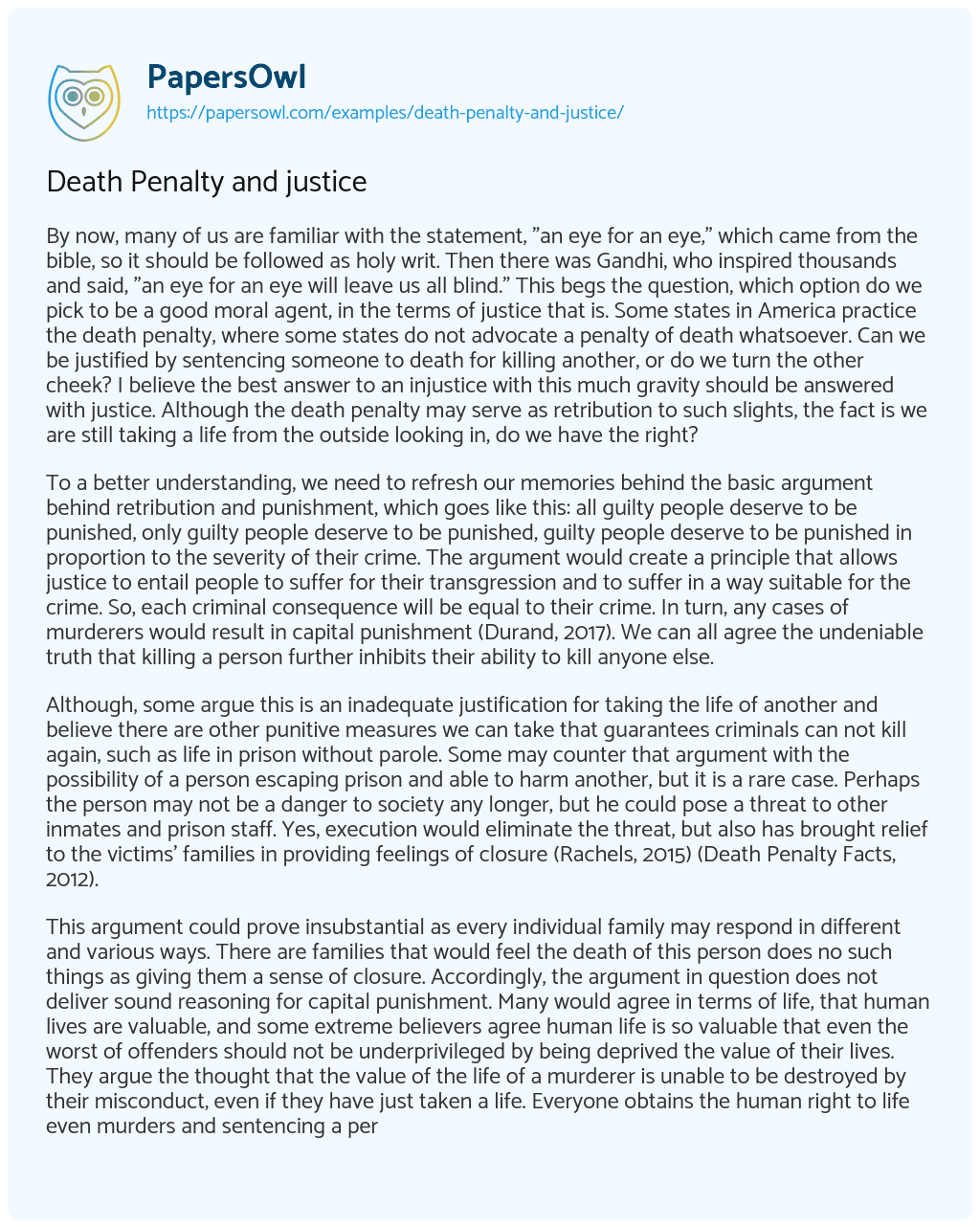 By now, many of us are familiar with the statement, “an eye for an eye,” which came from the bible, so it should be followed as holy writ. Then there was Gandhi, who inspired thousands and said, “an eye for an eye will leave us all blind.” This begs the question, which option do we pick to be a good moral agent, in the terms of justice that is. Some states in America practice the death penalty, where some states do not advocate a penalty of death whatsoever. Can we be justified by sentencing someone to death for killing another, or do we turn the other cheek? I believe the best answer to an injustice with this much gravity should be answered with justice. Although the death penalty may serve as retribution to such slights, the fact is we are still taking a life from the outside looking in, do we have the right?

Although, some argue this is an inadequate justification for taking the life of another and believe there are other punitive measures we can take that guarantees criminals can not kill again, such as life in prison without parole. Some may counter that argument with the possibility of a person escaping prison and able to harm another, but it is a rare case. Perhaps the person may not be a danger to society any longer, but he could pose a threat to other inmates and prison staff. Yes, execution would eliminate the threat, but also has brought relief to the victims’ families in providing feelings of closure (Rachels, 2015) (Death Penalty Facts, 2012).

This argument could prove insubstantial as every individual family may respond in different and various ways. There are families that would feel the death of this person does no such things as giving them a sense of closure. Accordingly, the argument in question does not deliver sound reasoning for capital punishment. Many would agree in terms of life, that human lives are valuable, and some extreme believers agree human life is so valuable that even the worst of offenders should not be underprivileged by being deprived the value of their lives. They argue the thought that the value of the life of a murderer is unable to be destroyed by their misconduct, even if they have just taken a life. Everyone obtains the human right to life even murders and sentencing a person to death is in violation of this right. However, it can be said a person can give up their right to live by their actions; the act of murder could be an act that would forfeit the right to life (Rachels, 2015).

The most powerful and persuasive defense against capital punishment is that it is only a matter of time before innocent people are sentenced to die because nothing is perfect especially our justice system as there are flaws which can lead to such mistakes. Witnesses, prosecutors, jurors, and judges are people humans are not intangible to making mistakes. Put that together with a system that is flawed, it is highly likely people that are innocent will suffer.

The most common and most convincing argument against capital punishment is that sooner or later, innocent people will get killed, because of mistakes or flaws in the justice system. In America alone, 130 people sentenced to death have been found innocent since 1973 and ultimately being released from death row (Death Penalty Facts, 2012). Numerous countries, including America, have executed people proven to suffer from insanity. The (NGRI) or “not guilty by the reasoning of insanity,” does not dismiss their crime, but rather proves the person was incapacitated due to mental illness. It is a rigorous process, as many of those that attempt the plea, are not found guilty by reason of insanity. People found insane is put in a mental institution, not for their safety, but for the safety of society (Death Penalty Facts, 2012) (Durand, 2017).

Given the evidence provided against the death penalty, one can easily see that there is little in a fulfilling purpose to it. Whatever form of this understanding one supports, its insinuation for the death penalty is reasonably clear. What is the point of a criminal reforming themselves when they prepare to be executed? which view should have priority in our thinking about punishment? Is there really a need for the Death Penalty in human society? Like a silver lining on a dark cloud, it can be made clear that, in an otherwise despairingly erroneous system, exists other practicable alternatives. The amount of different and less controversial, more rational and resourceful approaches to handling the severe misconduct in our society question the very nature and existence of the death penalty. Could it be as a means of controlling our shared hatred, confusion and anger that is a fundamental point that lies within the darker side of humanity, originating from conditions of our life that are laborious and demanding? The system has inadvertently created a system that relies on a scapegoat, pinning the blame of troubles amongst society onto them. The scapegoats then become victims of these cruel punishments; it is they who are blamed and cast out when the fault lies within our inherent social policies, methods, and practices.