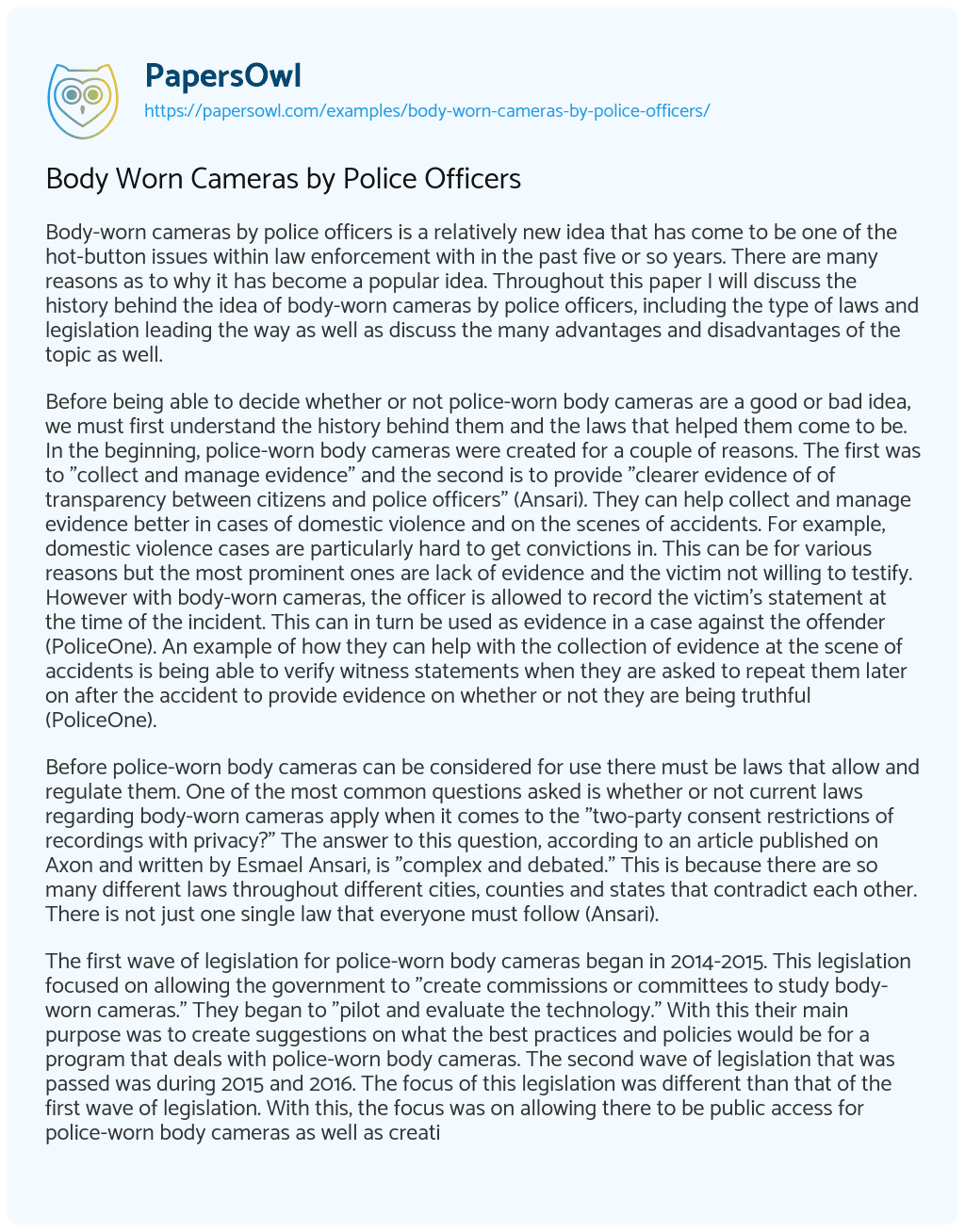 Body-worn cameras by police officers is a relatively new idea that has come to be one of the hot-button issues within law enforcement with in the past five or so years. There are many reasons as to why it has become a popular idea. Throughout this paper I will discuss the history behind the idea of body-worn cameras by police officers, including the type of laws and legislation leading the way as well as discuss the many advantages and disadvantages of the topic as well.

Before being able to decide whether or not police-worn body cameras are a good or bad idea, we must first understand the history behind them and the laws that helped them come to be. In the beginning, police-worn body cameras were created for a couple of reasons. The first was to “collect and manage evidence” and the second is to provide “clearer evidence of of transparency between citizens and police officers” (Ansari). They can help collect and manage evidence better in cases of domestic violence and on the scenes of accidents. For example, domestic violence cases are particularly hard to get convictions in. This can be for various reasons but the most prominent ones are lack of evidence and the victim not willing to testify. However with body-worn cameras, the officer is allowed to record the victim’s statement at the time of the incident. This can in turn be used as evidence in a case against the offender (PoliceOne). An example of how they can help with the collection of evidence at the scene of accidents is being able to verify witness statements when they are asked to repeat them later on after the accident to provide evidence on whether or not they are being truthful (PoliceOne).

Before police-worn body cameras can be considered for use there must be laws that allow and regulate them. One of the most common questions asked is whether or not current laws regarding body-worn cameras apply when it comes to the “two-party consent restrictions of recordings with privacy?” The answer to this question, according to an article published on Axon and written by Esmael Ansari, is “complex and debated.” This is because there are so many different laws throughout different cities, counties and states that contradict each other. There is not just one single law that everyone must follow (Ansari).

The first wave of legislation for police-worn body cameras began in 2014-2015. This legislation focused on allowing the government to “create commissions or committees to study body-worn cameras.” They began to “pilot and evaluate the technology.” With this their main purpose was to create suggestions on what the best practices and policies would be for a program that deals with police-worn body cameras. The second wave of legislation that was passed was during 2015 and 2016. The focus of this legislation was different than that of the first wave of legislation. With this, the focus was on allowing there to be public access for police-worn body cameras as well as creating a “standard policy” with specific requirements (Ansari). Along with this was determining which type of officers would be required to wear these cameras, if not all of them, and creating “grant programs” that would allow law enforcement departments to get the equipment necessary (Ansari). The next wave of legislation came in 2017. This legislation was similar to that of 2016 with the creating a standard policy that everyone must follow. This time however, they focused on determining the footage that should be kept evidence and what to allow the public to have access to in order for there to be transparency between the public and law enforcement. It was also during this time that they focused on state laws that already regard body-worn cameras and adjusting them so that there would be easier use of the technology (Ansari).

As with anything new, there are advantages and disadvantages of police-worn body cameras. A few of the advantages include, but are not limited to, an increase in safety of the public and the police, improvement of police accountability and protection of officers from false accusations of misconduct, and providing a good learning tool for police officers (ProCon). When it comes to increase in safety, this can occur because people act differently when they know they are being filmed. This can decrease violent acts by people because the idea of being filmed encourages people to be on good behavior. This will also decrease the amount of force officers must use and overall decrease the amount and severity of attacks against these police officers. An example of this can be shown in a study conducted in Rialto, California. This was the first US city to have a trial on police worn body cameras. The results found over a “50% reduction in the total number of use of force incidents by police officers when body cameras were worn.” Along with this, “complaints against officers fell from 28 in the year prior to the study to 3 during the year of the trial.” Another advantage is improving police accountablity and protecting officers from false accusations. Body-worn cameras can provide evidence, both visual and audio, that will allow for what happened in any given situation to be verified. An example of this, found on procon.org, was when a Texas police officer was fired and eventually charged with murder. This occurred after footage from a body-worn camera surfaced that contradicted what he initially said in the shooting of an unarmed youth. Police-worn body cameras being a good learning tool is another advantage. The video from these cameras can be use to train officers, both new and existing, showing them how to act and perform during encounters with the public that can be considered difficult. It can also be used to show them how not to act as well. For example, the Miami Police Department has been using police worn body cameras for training purposes since 2012. Police Major Ian Moffitt says “we can record a situation, a scenario in training, and then go back and look at it and show the student, the recruit, the officer what they did good, what they did bad, and what they can improve on” (ProCon).

Although there are many advantages, there are also some disadvantages as well. A few of these include the safety of police officers and how they can negatively effect their physical and mental health, invade privacy of citizens, and they are expensive and unreliable. Police-worn body cameras can decrease the safety of police officers because, instead of encouraging good behavior, sometimes cameras can cause people to respond negatively, sometimes even violently. This can be shown in a study conducted by the European Journal of Criminology. This study found that “assaults on police officers were 14% higher when body cameras were in use.” Another disadvantage is that they can invade the privacy of the public. According to procon.org, this can lead to medical conditions that were private to be exposed. This is especially true in states that allow for the public to have access to these body cameras’ footage. According to procon.org, the Spokan Chief of Police in Greensboro, North Carolina presumes taht “if citizens think they are going to be recorded every time they talk to an officer, regardless of the context, it is going to damage openness and creates barriers to important relationships.” The final disadvantage is that the equipment can be expensive. This requires for departments to create budgets for the camera as well as for the “ancillary equipment”, training, facilities for storage of the data and the costs for maintenace of the equipment. Police departments in several states have suspended the programs for body-worn cameras due to the rising costs (ProCon).