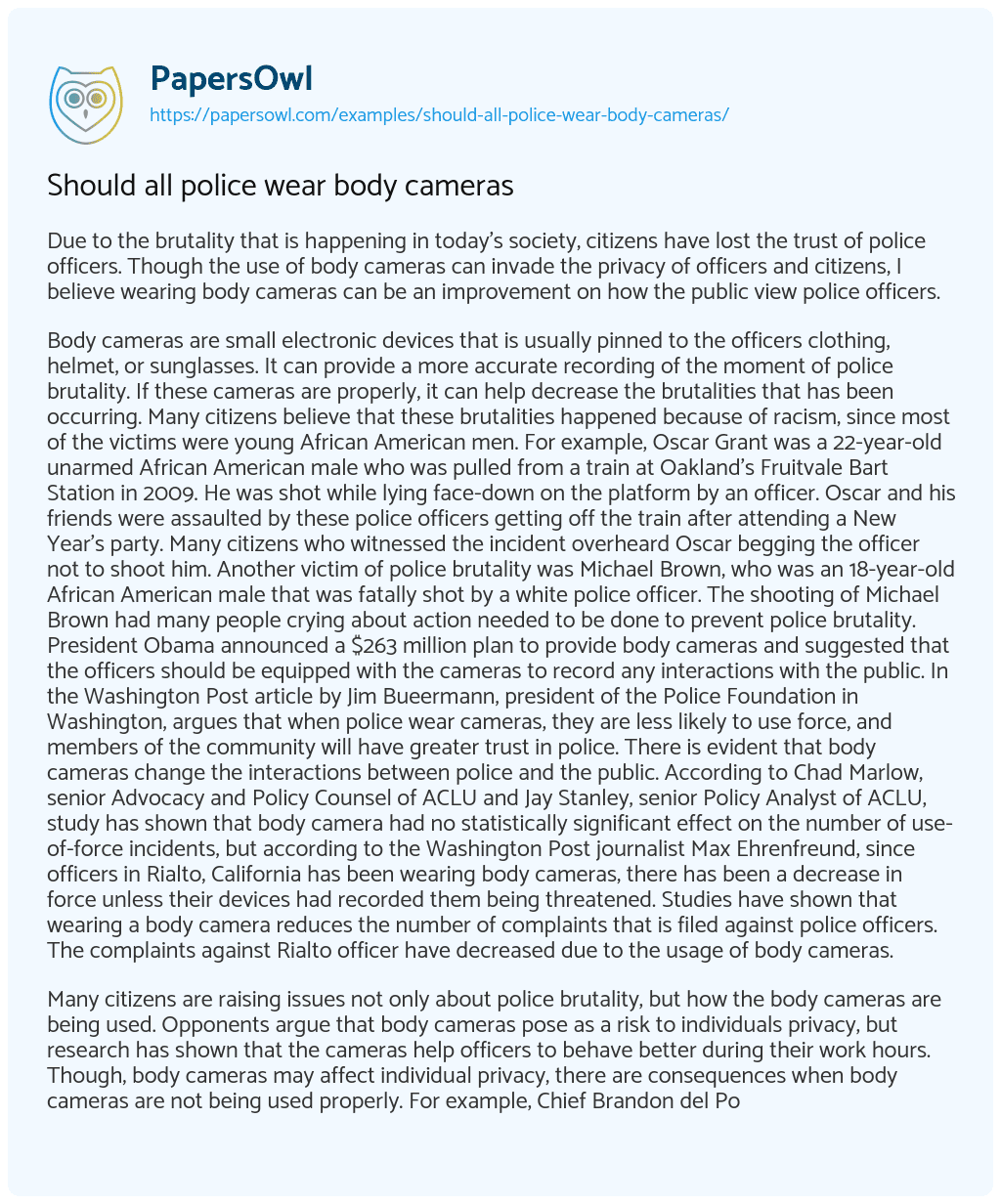 Body cameras are small electronic devices that is usually pinned to the officers clothing, helmet, or sunglasses. It can provide a more accurate recording of the moment of police brutality. If these cameras are properly, it can help decrease the brutalities that has been occurring. Many citizens believe that these brutalities happened because of racism, since most of the victims were young African American men. For example, Oscar Grant was a 22-year-old unarmed African American male who was pulled from a train at Oakland’s Fruitvale Bart Station in 2009. He was shot while lying face-down on the platform by an officer. Oscar and his friends were assaulted by these police officers getting off the train after attending a New Year’s party. Many citizens who witnessed the incident overheard Oscar begging the officer not to shoot him. Another victim of police brutality was Michael Brown, who was an 18-year-old African American male that was fatally shot by a white police officer. The shooting of Michael Brown had many people crying about action needed to be done to prevent police brutality. President Obama announced a $263 million plan to provide body cameras and suggested that the officers should be equipped with the cameras to record any interactions with the public. In the Washington Post article by Jim Bueermann, president of the Police Foundation in Washington, argues that when police wear cameras, they are less likely to use force, and members of the community will have greater trust in police. There is evident that body cameras change the interactions between police and the public. According to Chad Marlow, senior Advocacy and Policy Counsel of ACLU and Jay Stanley, senior Policy Analyst of ACLU, study has shown that body camera had no statistically significant effect on the number of use-of-force incidents, but according to the Washington Post journalist Max Ehrenfreund, since officers in Rialto, California has been wearing body cameras, there has been a decrease in force unless their devices had recorded them being threatened. Studies have shown that wearing a body camera reduces the number of complaints that is filed against police officers. The complaints against Rialto officer have decreased due to the usage of body cameras.

Many citizens are raising issues not only about police brutality, but how the body cameras are being used. Opponents argue that body cameras pose as a risk to individuals privacy, but research has shown that the cameras help officers to behave better during their work hours. Though, body cameras may affect individual privacy, there are consequences when body cameras are not being used properly. For example, Chief Brandon del Pozo of Burlington Police Department stated that one of his officers was brought under suspicion of perjury for statements he made when he thought his body camera was turned off. An officer keeping on their camera while on duty is an effective way to detect misconduct and corruption of an officer. According to Chad Marlow, the American Civil Liberties Union, police officers use their body cameras to capture footage on everything that they experience in the day, but the police get to determine what the public gets to see, and they can only release videos that show them in best light or promotes their perspective. For instance, in Albuquerque, New Mexico, officers independently chose whether to delete the footage on their body camera at the end of their shift. In Charlotte, North Carolina, a new law passed in the wake of Scott’s shooting makes it difficult for the public to view any police video, which triggers protesters. In Chicago, a police officer who was wearing a body camera failed to record the shooting of 18-year-old Paul O’Neal and was placed under administrative leave.

Body cameras is not only helpful to citizens, but to officers as well. Many citizens have made false police reports against an officer. Body cameras will also help to prevent any lawsuits against police officers. An officer that has on his body camera can record the incidents between them and that citizen. With body cameras worn by police officers, it will help the officer to be accountable for their behavior and it will be proof of their conduct. On policeone.com as stated by the police one staff, an Arizona police officer discovered the usefulness of body worn cameras when he got into an altercation outside of a convenience store with a citizen. A bystander captured the scuffle on his cell phone. The fight between the officer and the citizen went viral causing many people wonder about the officer’s behavior. Because the officer was wearing his body camera, it recorded the confrontation from his perspective. The citizens seen the footage of how the altercation began, and it was not the fault of the officer.

As evident shows, the use of having body cameras being worn is not only good use for the citizens, but for the officers as well. It will help decrease police brutality and the behavior of an officer.

Should all police wear body cameras. (2019, Jan 14). Retrieved from https://papersowl.com/examples/should-all-police-wear-body-cameras/

How do Police Body Cameras Work?

Police Body Cameras are they Worth it