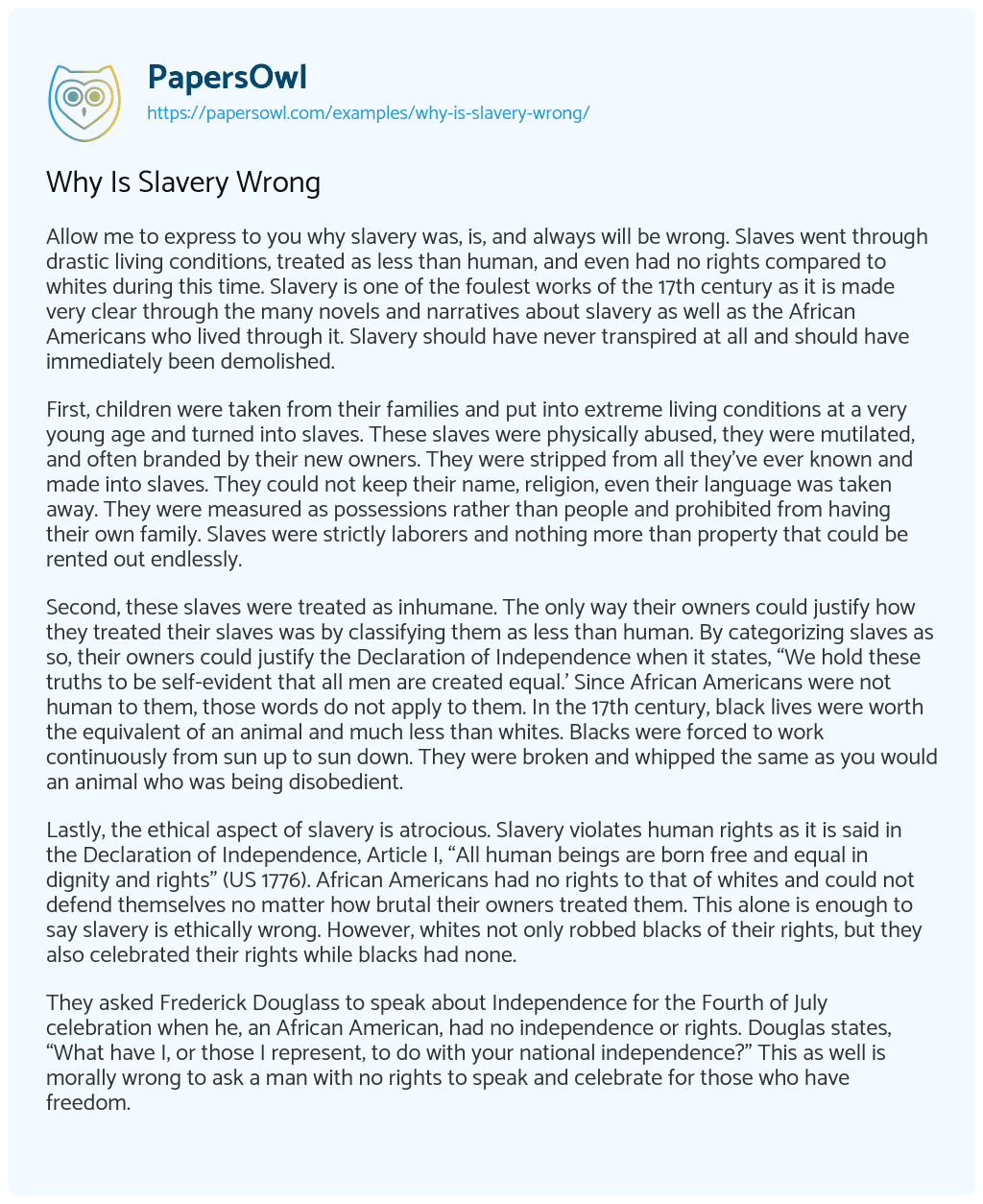 Allow me to express to you why slavery was, is, and always will be wrong. Slaves went through drastic living conditions, treated as less than human, and even had no rights compared to whites during this time. Slavery is one of the foulest works of the 17th century as it is made very clear through the many novels and narratives about slavery as well as the African Americans who lived through it. Slavery should have never transpired at all and should have immediately been demolished.

First, children were taken from their families and put into extreme living conditions at a very young age and turned into slaves. These slaves were physically abused, they were mutilated, and often branded by their new owners. They were stripped from all they’ve ever known and made into slaves. They could not keep their name, religion, even their language was taken away. They were measured as possessions rather than people and prohibited from having their own family. Slaves were strictly laborers and nothing more than property that could be rented out endlessly.

Second, these slaves were treated as inhumane. The only way their owners could justify how they treated their slaves was by classifying them as less than human. By categorizing slaves as so, their owners could justify the Declaration of Independence when it states, “We hold these truths to be self-evident that all men are created equal.’ Since African Americans were not human to them, those words do not apply to them. In the 17th century, black lives were worth the equivalent of an animal and much less than whites. Blacks were forced to work continuously from sun up to sun down. They were broken and whipped the same as you would an animal who was being disobedient.

Lastly, the ethical aspect of slavery is atrocious. Slavery violates human rights as it is said in the Declaration of Independence, Article I, “All human beings are born free and equal in dignity and rights” (US 1776). African Americans had no rights to that of whites and could not defend themselves no matter how brutal their owners treated them. This alone is enough to say slavery is ethically wrong. However, whites not only robbed blacks of their rights, but they also celebrated their rights while blacks had none.

They asked Frederick Douglass to speak about Independence for the Fourth of July celebration when he, an African American, had no independence or rights. Douglas states, “What have I, or those I represent, to do with your national independence?” This as well is morally wrong to ask a man with no rights to speak and celebrate for those who have freedom.

Why Is Slavery Wrong. (2022, Feb 10). Retrieved from https://papersowl.com/examples/why-is-slavery-wrong/

The is Child Slavery

The is Anti Slavery

Slavery by Another Name by Douglas a Blackmon

The Character of Slavery

Slavery before the 1840s – Lincoln

A Picture of Slavery and Racism in the Documentary the 13th