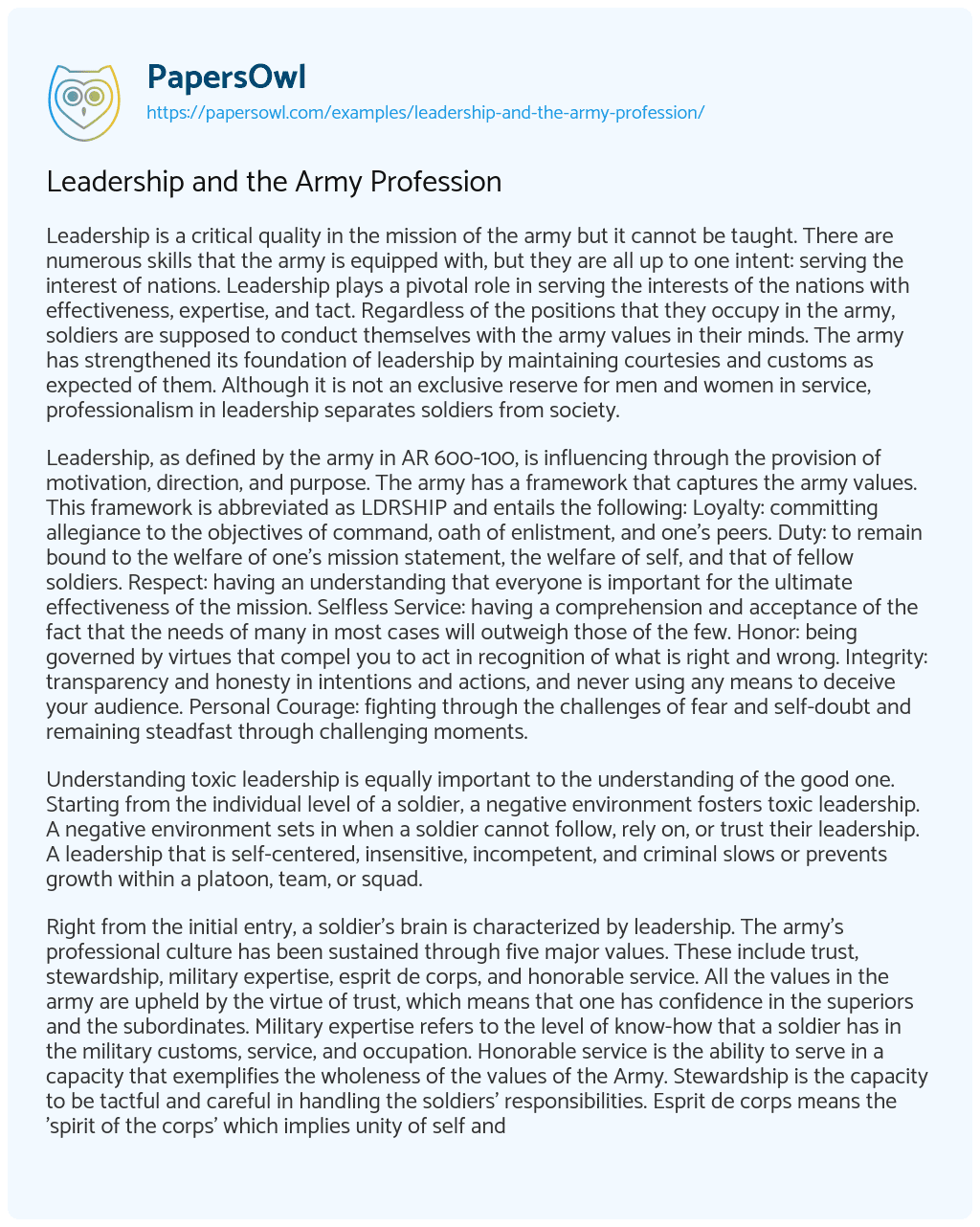 Leadership is a critical quality in the mission of the army but it cannot be taught. There are numerous skills that the army is equipped with, but they are all up to one intent: serving the interest of nations. Leadership plays a pivotal role in serving the interests of the nations with effectiveness, expertise, and tact. Regardless of the positions that they occupy in the army, soldiers are supposed to conduct themselves with the army values in their minds. The army has strengthened its foundation of leadership by maintaining courtesies and customs as expected of them. Although it is not an exclusive reserve for men and women in service, professionalism in leadership separates soldiers from society.

Leadership, as defined by the army in AR 600-100, is influencing through the provision of motivation, direction, and purpose. The army has a framework that captures the army values. This framework is abbreviated as LDRSHIP and entails the following: Loyalty: committing allegiance to the objectives of command, oath of enlistment, and one’s peers. Duty: to remain bound to the welfare of one’s mission statement, the welfare of self, and that of fellow soldiers. Respect: having an understanding that everyone is important for the ultimate effectiveness of the mission. Selfless Service: having a comprehension and acceptance of the fact that the needs of many in most cases will outweigh those of the few. Honor: being governed by virtues that compel you to act in recognition of what is right and wrong. Integrity: transparency and honesty in intentions and actions, and never using any means to deceive your audience. Personal Courage: fighting through the challenges of fear and self-doubt and remaining steadfast through challenging moments.

Right from the initial entry, a soldier’s brain is characterized by leadership. The army’s professional culture has been sustained through five major values. These include trust, stewardship, military expertise, esprit de corps, and honorable service. All the values in the army are upheld by the virtue of trust, which means that one has confidence in the superiors and the subordinates. Military expertise refers to the level of know-how that a soldier has in the military customs, service, and occupation. Honorable service is the ability to serve in a capacity that exemplifies the wholeness of the values of the Army. Stewardship is the capacity to be tactful and careful in handling the soldiers’ responsibilities. Esprit de corps means the ‘spirit of the corps’ which implies unity of self and your element. Synchronicity is created with soldiers who are well-equipped with the culture of the army, and cadence of action and are effectively trained. Iron fist does not guarantee a strong command, but respect, communication, and attentiveness do. When one masters the art of respecting all ranks, they develop individually and unity is matured. The army profession is anchored on this individual development.

In pursuit of establishing a foundation, soldiers need to be given dynamic ways of thinking. The army comprises many parts that represent various life experiences. The various experiences that work together as a unit are the factors that develop potential leaders. When one enrolls in the army, the first thing that they are taught is how to be a soldier. This is what is known as professionalism in uniform. Being a soldier gives the individual pride when serving and helps the person directly align to the military bearing. Self-confidence is created when soldiers are equipped with technical and cultural knowledge of the army. When one wishes to have the soldiers willing and open to trust them, he should instill confidence. Through such developed confidence, the soldiers start taking more calculated risks.

When soldiers are well-equipped with confidence, they start identifying risks versus rewards, which is a crucial thinking tool. Through critical thinking, the soldiers can maneuver issues concerning the professional, social, and moral importance of ethics in the army profession. Besides, when soldiers are rewarded through certification and commendations for their critical thinking, the confidence that they have is further validated. Some of the things that validate the soldiers’ military expertise include graduations from professional military schools and promotions. Also, subordinates benefit from validation of duty as they have attainable goals through their leadership. A soldier is shown the standards that they need to attain where the commitment to the army goals is demonstrated.

It can, therefore, be rightly deduced that in the army leadership and professionalism are synonymous, but not mutually exclusive.  This is clear from the examination of both the five essential values and army values. The common factor that these values demonstrate is the leadership attributes that one should possess. The army culture fosters the attributes of followership that result in building strong leadership. When a person carries leadership as a trait, then the soldier’s ability to execute such traits is professionalism.

Leadership and the Army Profession. (2021, Mar 25). Retrieved from https://papersowl.com/examples/leadership-and-the-army-profession/

Servant Leaders should Lead by Example