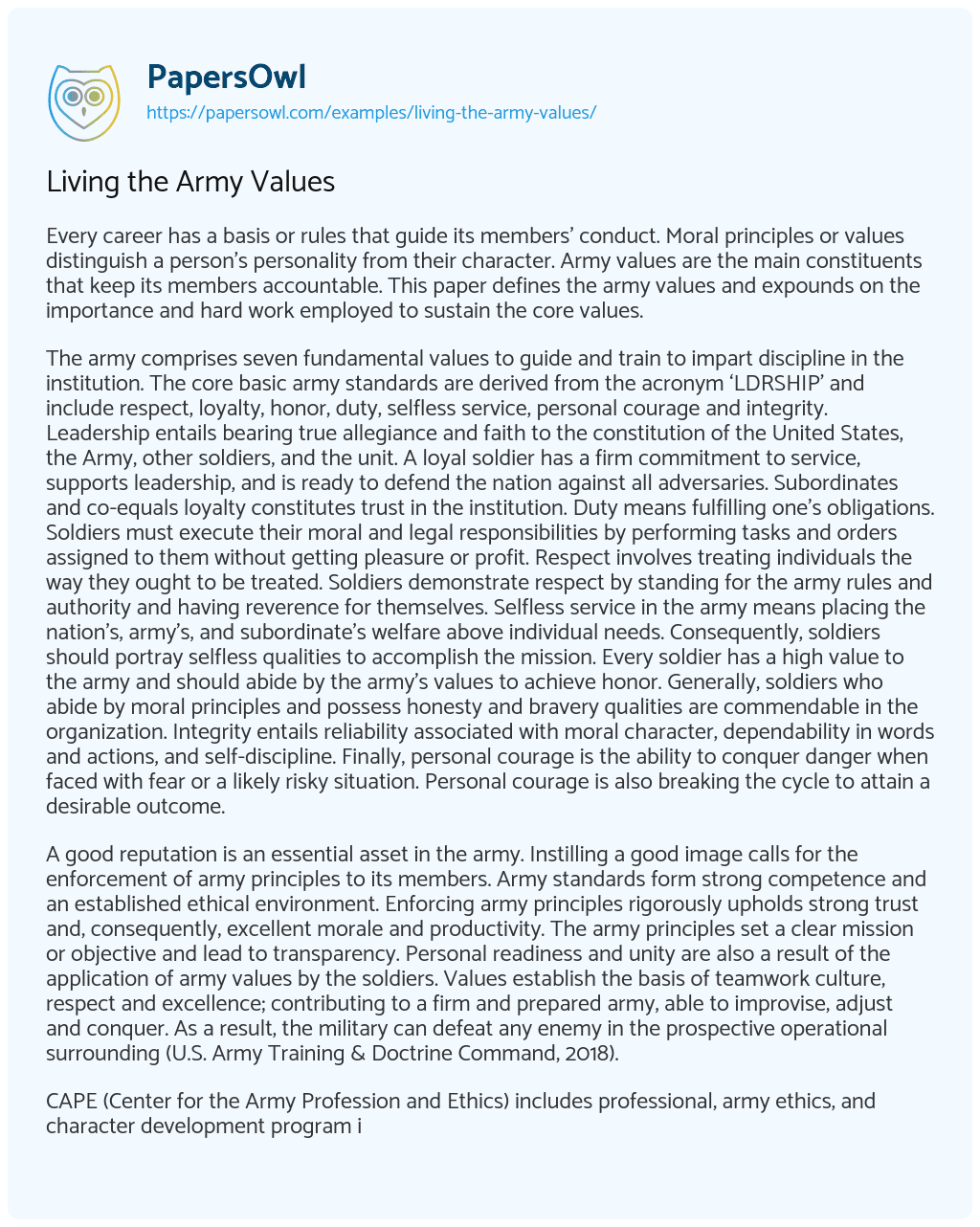 Every professional environment has set guidelines or foundations that govern the behavior of members. What separates an individuals’ personality from the character is the concrete moral values or principles. Army values are the essential ingredients that hold its members to higher standards. This paper will define the army values, explain the importance and efforts put in place to maintain those core values.

To instill discipline within the institution, the army has set seven core values to train and live by. The seven core army values are loyalty, duty, respect, selfless service, honor, integrity, and personal courage. These values form the acronym “LDRSHIP”. Loyalty means, “To bear true faith and allegiance to the U.S. Constitution, the Army, unit and other Soldiers”. A loyal soldier is one who shows unwavering devotion to service, support for leadership and prepared to defend the country against all enemies. Loyalty among co-equals and subordinates creates trust within the organization. The next value is Duty, which means, “Fulfill your obligations”. Soldiers should perform their legal and moral responsibilities by executing assigned orders and task without attaining profit or pleasure. Respect is another key value; it means, “Treat people as they should be treated”. Reverence to self, authority, and abiding by the army rules and regulations is one-way soldiers show respect. Another crucial value is selfless service. The army defines selfless service, as the act of placing the welfare of the nation, army, and subordinates above one’s needs. In other words, soldiers should exemplify altruistic qualities to achieve the mission. The army holds its members to a high esteem hence every soldier should “live up the army values”. This is what the army defines as Honor. Overall, soldiers that adhere to the code of conduct and possess qualities such as valor and honesty deemed worthy within the organization. Integrity implies soundness of moral character, self-discipline, and consistency in words and deeds. Lastly, personal courage translates to the ability to overcome adversity in the presence of fear or a potentially dangerous situation. It also means getting out of one’s comfort zone to achieve desirable results.

An outstanding reputation is one of the army’s most important asset. A key part of building a good image is enforcing the army values among its members. The Army values build strong professionalism and a well-developed ethical environment. Rigorously enforcing army values promotes strong trust; hence, greater productivity and morale. The values spell out a clear objective or mission in the army resulting in transparency. When Soldiers learn and apply the army values, it promotes unity and personal readiness. The values form the foundation of a culture of teamwork, excellence, and respect. Thus, contributes to a strong and ready Army that can improvise, adapt and overcome. For this reason, the Army is postured to defeat any adversary in the future operational environment (U.S. Army Training & Doctrine Command, 2018).

To maintain the core army values, Center for the Army Profession and Ethic (CAPE) incorporates army ethics, profession and character development doctrine into military education and daily operation. CAPEs virtual simulators integrate army values into their education program to enable trainees to understand key concepts of army profession and ethics. For Example, “Keepers of the Colors & Our Profession, The Company We Keep, and “True Faith and allegiance”. NIMS (Not In My Squad) workshop and squad assessment tool is used to build cohesion in a team or unit. Indeed, America’s Army Our Profession (AAOP)- “Stand Strong” theme focus on honorable service and stewardship of the Army profession. Again, from recruiting station to the completion of Advanced Individual Training (AIT), new recruits are taught and trained to live by the core army values. Through continuous military education such as BLC, OCS etc., soldiers recommit to the army values. Rendering rewards and punishments is another way the army maintains the core values within the organization. Soldiers that do not adhere to the ethical and moral expectations of the army are punished. On the other hand, value-driven soldiers that show exceptional character and compliance with the standards are rewarded.

In conclusion, character development, trust, and professionalism are very essential to mission accomplishment. Understanding the army values, efforts put in place to maintain the standards and its importance in today’s army promotes growth within the operational environment.