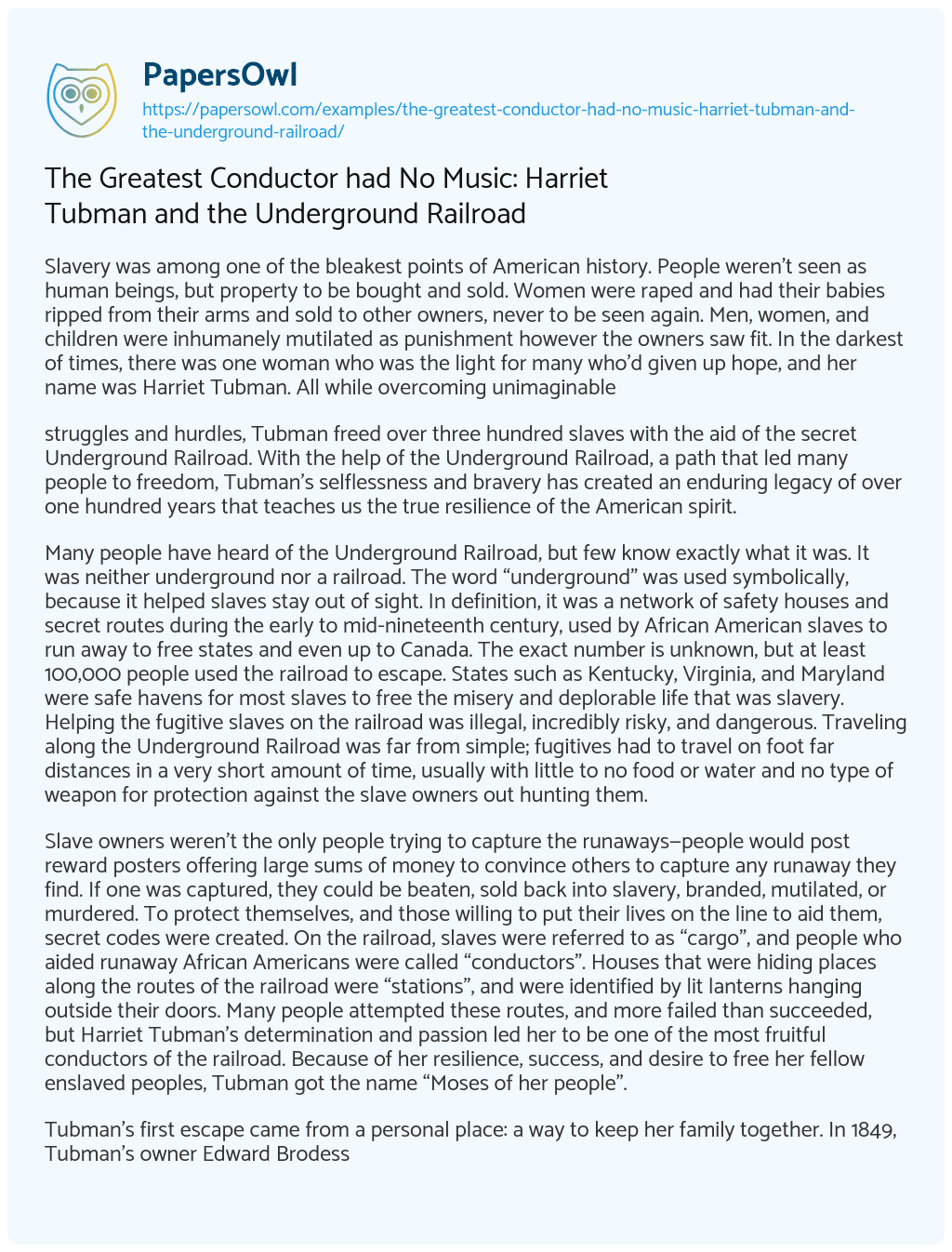 Slavery was among one of the bleakest points of American history. People weren’t seen as human beings, but property to be bought and sold. Women were raped and had their babies ripped from their arms and sold to other owners, never to be seen again. Men, women, and children were inhumanely mutilated as punishment however the owners saw fit. In the darkest of times, there was one woman who was the light for many who’d given up hope, and her name was Harriet Tubman. All while overcoming unimaginable

struggles and hurdles, Tubman freed over three hundred slaves with the aid of the secret Underground Railroad. With the help of the Underground Railroad, a path that led many people to freedom, Tubman’s selflessness and bravery has created an enduring legacy of over one hundred years that teaches us the true resilience of the American spirit.

Many people have heard of the Underground Railroad, but few know exactly what it was. It was neither underground nor a railroad. The word “underground” was used symbolically, because it helped slaves stay out of sight. In definition, it was a network of safety houses and secret routes during the early to mid-nineteenth century, used by African American slaves to run away to free states and even up to Canada. The exact number is unknown, but at least 100,000 people used the railroad to escape. States such as Kentucky, Virginia, and Maryland were safe havens for most slaves to free the misery and deplorable life that was slavery. Helping the fugitive slaves on the railroad was illegal, incredibly risky, and dangerous. Traveling along the Underground Railroad was far from simple; fugitives had to travel on foot far distances in a very short amount of time, usually with little to no food or water and no type of weapon for protection against the slave owners out hunting them.

Slave owners weren’t the only people trying to capture the runaways—people would post reward posters offering large sums of money to convince others to capture any runaway they find. If one was captured, they could be beaten, sold back into slavery, branded, mutilated, or murdered. To protect themselves, and those willing to put their lives on the line to aid them, secret codes were created. On the railroad, slaves were referred to as “cargo”, and people who aided runaway African Americans were called “conductors”. Houses that were hiding places along the routes of the railroad were “stations”, and were identified by lit lanterns hanging outside their doors. Many people attempted these routes, and more failed than succeeded, but Harriet Tubman’s determination and passion led her to be one of the most fruitful conductors of the railroad. Because of her resilience, success, and desire to free her fellow enslaved peoples, Tubman got the name “Moses of her people”.

Tubman’s first escape came from a personal place: a way to keep her family together. In 1849, Tubman’s owner Edward Brodess needed to sell some slaves because his debts were growing in size. Harriet—known at the time by her given name Araminta, or “Minty”—began hearing rumors that she and her brothers Harry and Ben were going to be sold to different plantations. She was so angry and scared at the thought of her brothers being sold, that she began to pray to God asking her owner to make him change his ways. Araminta said: “Oh, Lord, if you ain’t never going to change that man’s heart, kill him, Lord, and take him out of the way”. And to her surprise, a week later, Brodess fell dead. The death of her master made her future with her brothers even more uncertain, as they’d already seen their mother and sisters sold. Araminta decided then she wouldn’t allow it to happen to her brothers, as well. To prepare her escape, she changed her name from Araminta to Harriet, after her mother, and adopted her father’s last name. Changing their names was a way to make escape a little easier for them as to not leave any trace behind. Harriet Tubman and her brothers, Henry and Ben escaped from slavery on September 17th, 1849. Tubman escaped from the plantation at night, to make it harder for her and her brothers to be spotted by slavecatchers. Following the North Star, she started her expedition north. However, her brothers Henry and Ben were intimidated by the weight of the task and went back to the plantation. Tubman, however, continued. The first conductor to help her along the railroad was a white Quaker woman, and gave Tubman shelter, food, and instructions to the next station. Tubman traveled ninety miles along the Choptank River through Delaware and Pennsylvania. Once she reached free land, she quoted years later, “When I found I had crossed that line, I looked at my hands to see if I was the same person. There was such a glory over everything, the sun came like gold through the trees, and over the fields, and I felt like I was in Heaven” (Bradford 83). The line Tubman was speaking about is the Mason Dixon line, which was what separated the north from the south, and the free men from the slaves. It was at this time that Congress had passed the Fugitive Slave Act of 1850, which enforced stronger punishment and made police officers—even in states that had made slavery illegal—allowed to capture people and bring them into slavery. The law made risks even higher for escaped African

Americans, and especially for Tubman. When she reached Philadelphia in December of 1850, Tubman thought of her family still being held in the shackles of slavery. Shortly after she’d arrived, she was told that her niece Kessiah and her children were about to be sold and separated. This was her first time returning to the south to free enslaved people. Using the Underground Railroad and conductors, Tubman successfully freed Kessiah and her children. Her family members were the first slaves she’d freed, but they weren’t close to being her last.

In 1851, Tubman embarked on her third trip to get her husband, John. However, he’d remarried and didn’t want to leave with her. This did not sway her—she went back down south to see who would leave with her to safety. Eleven slaves went with her, and one of them had a baby. To keep them from being found, Tubman gave the baby sedatives. Armed with a gun, Tubman led the “passengers” on a long, dark, and cold journey to the safe “station” of Frederick Douglas in Pennsylvania, whom Harriet had befriended, and he’d kept her and the runaways safe until he’d gotten money to send them off to St. Catherine in Canada. In St. Catherine, black and white people lived in peace and had their own land. Tubman did not stop there, however; she went back to the United States to free more slaves in the winter of 1852. From 1852 to 1857, Harriet Tubman made eleven trips along the Underground Railroad from Maryland to Canada.

She’d began to get notoriety throughout the South of her efforts, and people referred to her as “Moses”. Plantation owners had heard of her as well, and she had a bounty of $40,000 on her head. She was famously stern during her trips; one story tells how a runaway wanted to run back to the plantation while panicking, and Tubman pointed a gun at his head, telling him, “dead folks tell no tales”. While back in Canada, Tubman met John Brown, a famous abolitionist. He’d called her “General Tubman”, and admired her intelligence and bravery. He called her “one of the best and bravest persons on this continent”. Harriet Tubman’s years of conducting the Underground Railroad was starting to come to a close by the tail end of the year 1860. Her last trip was to Maryland, freeing seven more people to Canada. During her time as a conductor, she’d made over nineteen trips and freed over three hundred slaves, and never lost a single one.

In 1861, Tubman came back to America. At this time, the Civil War was starting and all men were being enlisted. Tubman enlisted herself into the Union Army as a nurse. She treated patients with natural remedies and never caught any sort of disease the soldiers carried. She’d worked as a nurse until 1863, when she’d worked with Colonel James Montgomery as a scout to organize groups of slaves who might’ve wanted to join the Union. Tubman went further in her efforts to assist the Union, and organized the Combahee River Raid with Montgomery. The raid attacked whites to rescue slaves, and they’d ended up freeing five hundred people. All of them joined the Union army. When she was leading a group of black soldiers in South Carolina, Tubman met Nelson Davis, a fellow freed black soldier. After the war had ended, she’d went back to her new home in New York and married Nelson Davis and they’d stayed married for nineteen years. For the remainder of her life, Tubman transformed her home into a Methodist

Episcopal Zion Church haven for the elderly and helped aid them until her death on March 10th, 1913. She was buried with military honors at Fort Hill Cemetery, and Auburn created a day of memorial in her name.

The legacy of Harriet Tubman is something that has inspired us all. Her bravery and resilience in the face of unimaginable odds inspired people across all racial lines. She touched something in everyone that went deeper than racial or cultural differences; she touched the human soul. She had a goal, and she would stop at nothing to follow it. She overcame every challenge she faced no matter how impossible the odds, and would never tolerate a failure. In her words, she told the slaves that came with her “on my Underground Railroad, I never rain my train off the track and I never lost a passenger”. Everyone should be a little more like Harriet Tubman—no matter what, keep going forward.

The Greatest Conductor had No Music: Harriet Tubman and the Underground Railroad. (2021, Apr 19). Retrieved from https://papersowl.com/examples/the-greatest-conductor-had-no-music-harriet-tubman-and-the-underground-railroad/