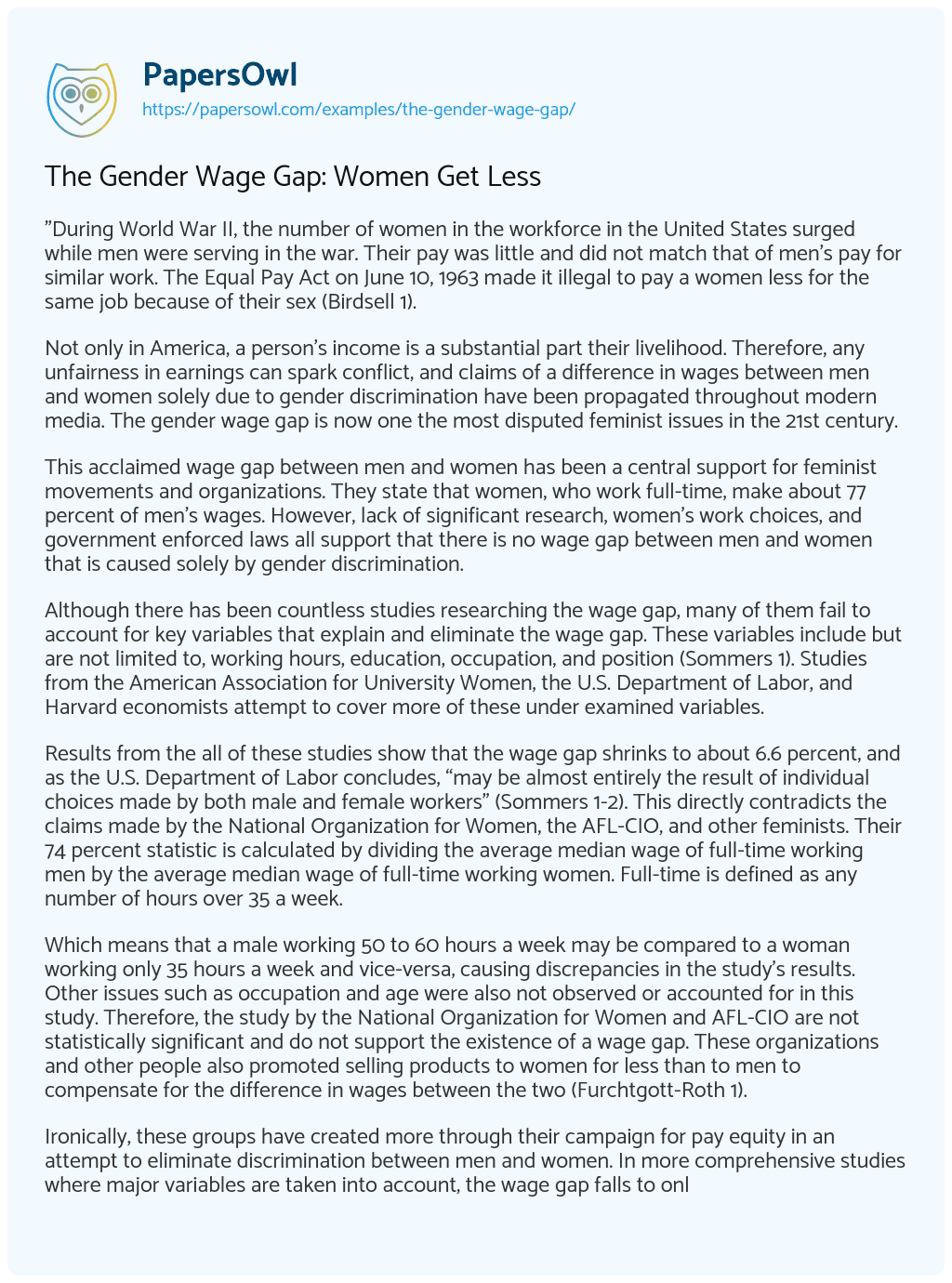 “During World War II, the number of women in the workforce in the United States surged while men were serving in the war. Their pay was little and did not match that of men’s pay for similar work. The Equal Pay Act on June 10, 1963 made it illegal to pay a women less for the same job because of their sex (Birdsell 1).

Not only in America, a person’s income is a substantial part their livelihood. Therefore, any unfairness in earnings can spark conflict, and claims of a difference in wages between men and women solely due to gender discrimination have been propagated throughout modern media. The gender wage gap is now one the most disputed feminist issues in the 21st century.

This acclaimed wage gap between men and women has been a central support for feminist movements and organizations. They state that women, who work full-time, make about 77 percent of men’s wages. However, lack of significant research, women’s work choices, and government enforced laws all support that there is no wage gap between men and women that is caused solely by gender discrimination.

Although there has been countless studies researching the wage gap, many of them fail to account for key variables that explain and eliminate the wage gap. These variables include but are not limited to, working hours, education, occupation, and position (Sommers 1). Studies from the American Association for University Women, the U.S. Department of Labor, and Harvard economists attempt to cover more of these under examined variables.

Results from the all of these studies show that the wage gap shrinks to about 6.6 percent, and as the U.S. Department of Labor concludes, “may be almost entirely the result of individual choices made by both male and female workers” (Sommers 1-2). This directly contradicts the claims made by the National Organization for Women, the AFL-CIO, and other feminists. Their 74 percent statistic is calculated by dividing the average median wage of full-time working men by the average median wage of full-time working women. Full-time is defined as any number of hours over 35 a week.

Which means that a male working 50 to 60 hours a week may be compared to a woman working only 35 hours a week and vice-versa, causing discrepancies in the study’s results. Other issues such as occupation and age were also not observed or accounted for in this study. Therefore, the study by the National Organization for Women and AFL-CIO are not statistically significant and do not support the existence of a wage gap. These organizations and other people also promoted selling products to women for less than to men to compensate for the difference in wages between the two (Furchtgott-Roth 1).

Ironically, these groups have created more through their campaign for pay equity in an attempt to eliminate discrimination between men and women. In more comprehensive studies where major variables are taken into account, the wage gap falls to only 6.6 percent, but this is still significant when examining tens of thousands of dollars. Unfortunately, there is no conclusive way to explain this “gap” between men’s and women’s pay (Sommers 1-2). The number and complexity of the factors that affect people’s wages are too vast to be covered completely in one study. Regardless, even though we don’t know the cause of the existing wage gap, it is not reasonable to direct its origin to gender discrimination as it hold as much support as any other factor that causes variations between wages.

Furthermore, women’s work choices greatly impact the amount of money they make, and these choices are conscious decisions made by women themselves. As Christina Hoff Sommers states, “women out-represent men in only one of the five top- paying majors – by only a few percentage points”. This shows that women are choosing college majors that pay less than the ones that men are choosing. Even when working the same hours and have the same years of education, we cannot expect a woman with a B.A. in English to be paid the same as a man with a B.A. in math (Furchtgott-Roth 3).

Therefore, it is insignificant to compare the two and claim that there is an unfair pay within the genders. College degree is not the only choice that women are making that impacts their wages comparatively to men. Family responsibilities, schedules, vacation days, and overtime hours are all choices made by individuals that affect their wage. A study by two Harvard University economists revealed that “Men take 48% fewer unpaid hours off and work 83% more overtime hours per year than women”. In turn, men are expected to get paid more for the sacrifices in time they make. With this regard, men are also shown to have longer periods of uninterrupted work. Meaning that they take less long periods of time off, and in turn gain more experience (which correlates to higher pay). Another choice women make that affect their pay is having children.

Of course, having children is a decision that both parents make, but most family structures have the mother take care of the children, leading her to make less money. Studies link increased number of children with decreased earnings, which is an result of women who have children and take jobs that allow them to combine familial and work related responsibilities. Society shapes the way people make money and how each family functions. For example, for 20-30 year olds living in large cities such as New York, Boston, Chicago, Minneapolis and Los Angeles”

Why is there Still a Wage Gap Amongst Men and Women in the Nursing Field?