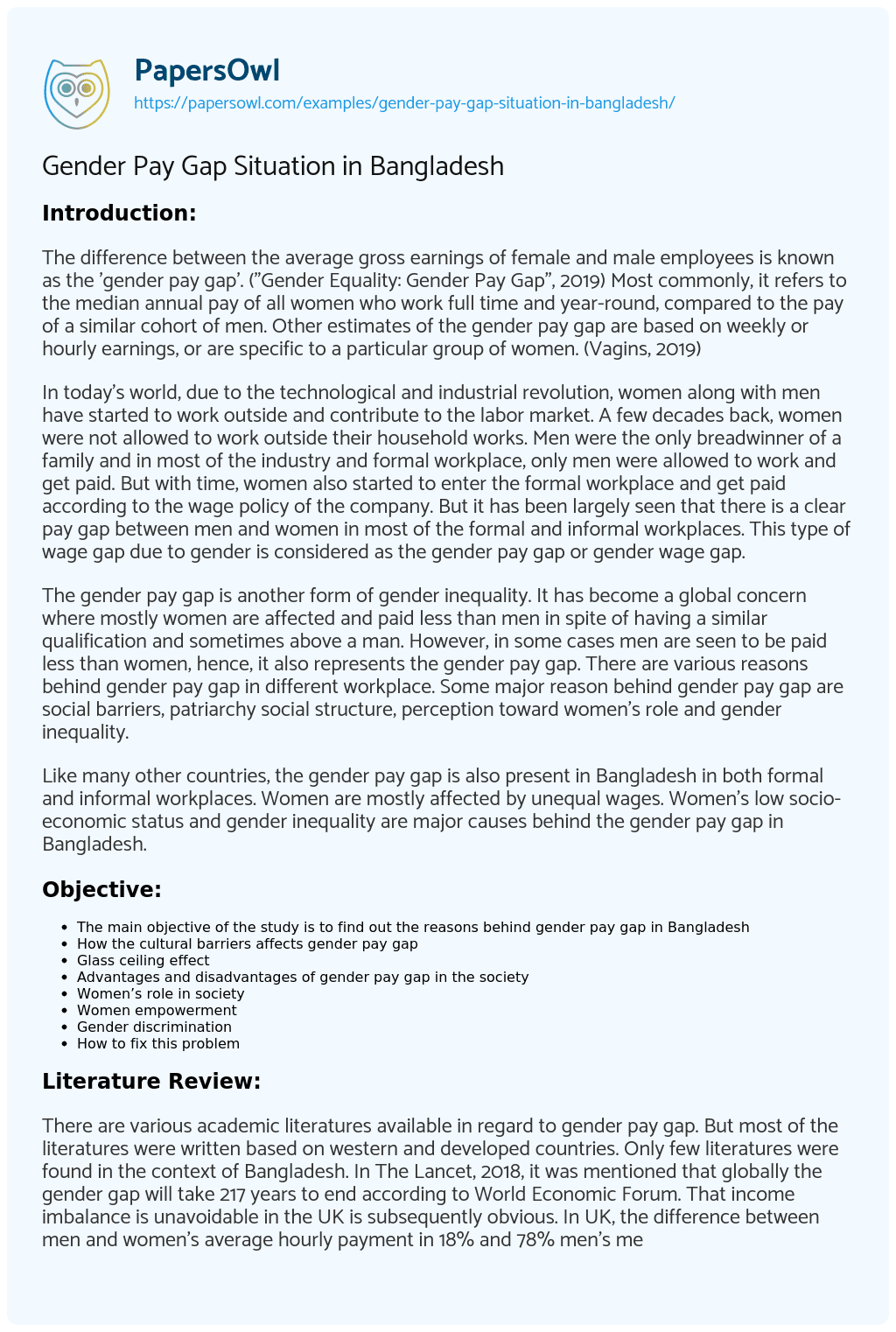 The difference between the average gross earnings of female and male employees is known as the ‘gender pay gap’. (“Gender Equality: Gender Pay Gap”, 2019) Most commonly, it refers to the median annual pay of all women who work full time and year-round, compared to the pay of a similar cohort of men. Other estimates of the gender pay gap are based on weekly or hourly earnings, or are specific to a particular group of women. (Vagins, 2019)

In today’s world, due to the technological and industrial revolution, women along with men have started to work outside and contribute to the labor market. A few decades back, women were not allowed to work outside their household works. Men were the only breadwinner of a family and in most of the industry and formal workplace, only men were allowed to work and get paid. But with time, women also started to enter the formal workplace and get paid according to the wage policy of the company. But it has been largely seen that there is a clear pay gap between men and women in most of the formal and informal workplaces. This type of wage gap due to gender is considered as the gender pay gap or gender wage gap.

There are various academic literatures available in regard to gender pay gap. But most of the literatures were written based on western and developed countries. Only few literatures were found in the context of Bangladesh. In The Lancet, 2018, it was mentioned that globally the gender gap will take 217 years to end according to World Economic Forum. That income imbalance is unavoidable in the UK is subsequently obvious. In UK, the difference between men and women’s average hourly payment in 18% and 78% men’s median hourly pay was greater than women’s. However, it is illegal to pay women less than men for the same or broadly similar work, and these data do not reveal whether this is happening.

In Cladia Goldin’s “How to achieve Gender Eqality”, the author stated that women with equivalent education and experience earns less than men on average. The ratio of the average (mean) earnings of female workers (fulltime, full-year, 25 to 69 years old) to that of their male counterparts was 0.72 in 2010. The pay ratio of median earners (those at the 50th percentile) for the same groups was 0.78.

According to Olivia Mitchell of the Wharton School of the University of Pennsylvania, three of the most significant contributors to the wage gap are as follows- “the penalty women face for becoming mothers, women’s lack of negotiating skills and the bias women face from employers,”.

The secondary data on gender pay gap in Bangladesh were collected from the primary data of Bangladesh Labor force Survey 2016-2017 by Bangladesh Bureau of Statistics.

Women’s socio-economic status is one of the major reason behind low wage in workplaces. Women are considered as vulnerable population in the country and in many cases women’s participation in workplace is discouraged due to patriarch perception among major population. Less education, lack of skills and early marriage are some of the major factors behind women’s low wage.

Cultural barriers are another obstacles behind women’s low wage as most of the rural and traditional views towards women’s participation in works outside home are negative. Glass ceiling effect, which prevents women and minorities from rising to the highest ranks in a corporation or workplace. From the average monthly income of formal sector employment table, it is visible that women are less paid in most of the occupation which represents the glass ceiling effect in those workplaces.

Lack of women empowerment and gender inequality is another reason which is why gender pay gap is present in Bangladesh. Bangladesh is still one of the highest ranked countries where gender inequality is still higher. Due to gender discrimination, women are also neglected when it comes to pay their wages in formal and informal workplaces.

According to the International Labour Organization (ILO), key policy areas to reduce the gender pay gap are contracts, promotions, and remuneration. Different activities concentrating on reducing the gender pay gap among individuals focus on arranging an in – house equity officer and preparing workers, making imbalance protest methods and treating each case separately to choose whether segregation has occurred due to any intrinsic preconditions in the assignments to be performed.

From women and gender perspective, gender pay gap affects largely on women and their income inequality plays a vital role in their socio-economic status in the society. Hence, gender pay gap should be reduced in order to have gender equality in the country.