Gender Gap in Workplaces in Korea 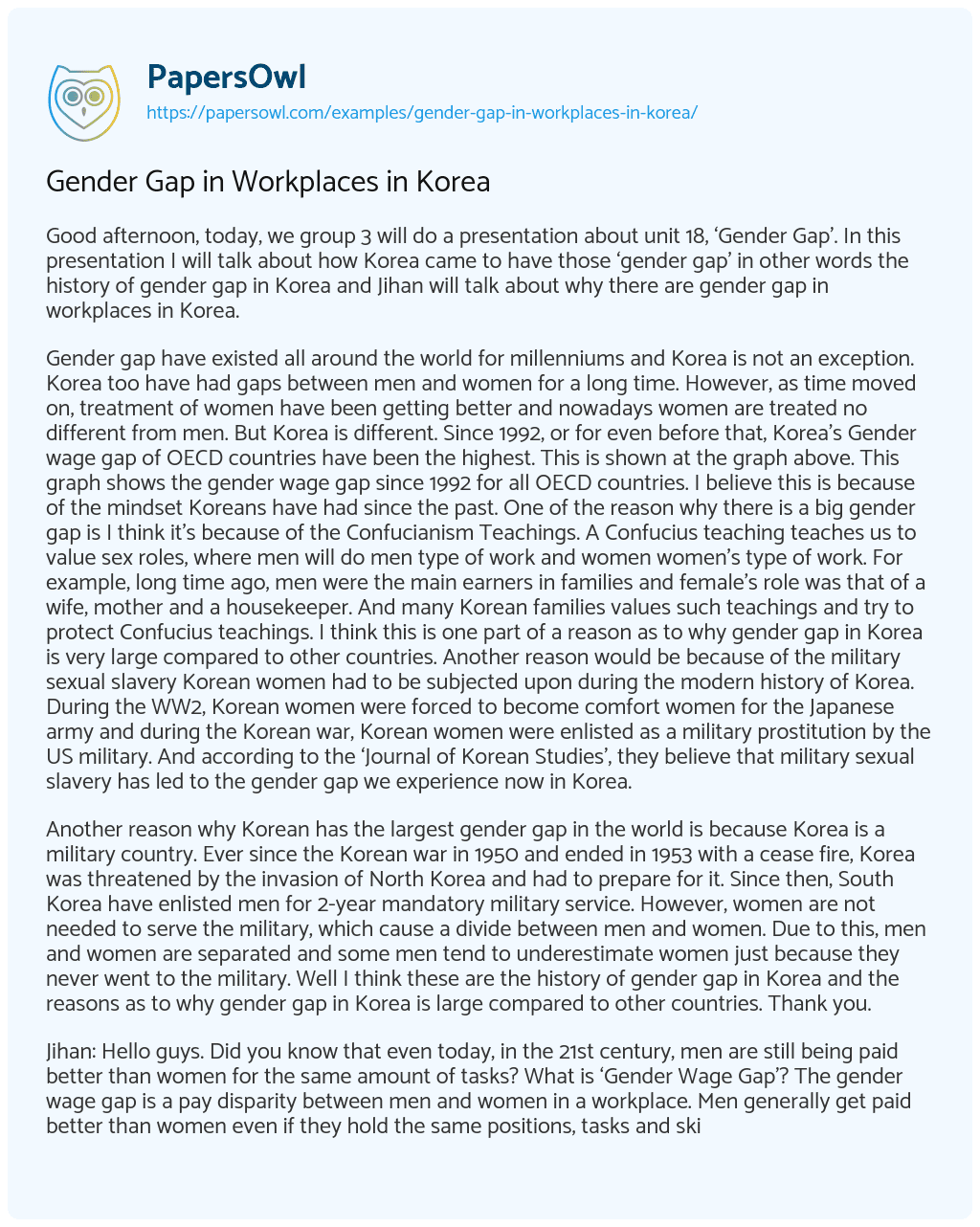 Gender gap have existed all around the world for millenniums and Korea is not an exception. Korea too have had gaps between men and women for a long time. However, as time moved on, treatment of women have been getting better and nowadays women are treated no different from men. But Korea is different. Since 1992, or for even before that, Korea’s Gender wage gap of OECD countries have been the highest. This is shown at the graph above. This graph shows the gender wage gap since 1992 for all OECD countries. I believe this is because of the mindset Koreans have had since the past. One of the reason why there is a big gender gap is I think it’s because of the Confucianism Teachings. A Confucius teaching teaches us to value sex roles, where men will do men type of work and women women’s type of work. For example, long time ago, men were the main earners in families and female’s role was that of a wife, mother and a housekeeper. And many Korean families values such teachings and try to protect Confucius teachings. I think this is one part of a reason as to why gender gap in Korea is very large compared to other countries. Another reason would be because of the military sexual slavery Korean women had to be subjected upon during the modern history of Korea. During the WW2, Korean women were forced to become comfort women for the Japanese army and during the Korean war, Korean women were enlisted as a military prostitution by the US military. And according to the ‘Journal of Korean Studies’, they believe that military sexual slavery has led to the gender gap we experience now in Korea.

Another reason why Korean has the largest gender gap in the world is because Korea is a military country. Ever since the Korean war in 1950 and ended in 1953 with a cease fire, Korea was threatened by the invasion of North Korea and had to prepare for it. Since then, South Korea have enlisted men for 2-year mandatory military service. However, women are not needed to serve the military, which cause a divide between men and women. Due to this, men and women are separated and some men tend to underestimate women just because they never went to the military. Well I think these are the history of gender gap in Korea and the reasons as to why gender gap in Korea is large compared to other countries. Thank you.

Jihan: Hello guys. Did you know that even today, in the 21st century, men are still being paid better than women for the same amount of tasks? What is ‘Gender Wage Gap’? The gender wage gap is a pay disparity between men and women in a workplace. Men generally get paid better than women even if they hold the same positions, tasks and skills. This is not only in the South Korea but this is worldwide especially in the most developed countries such as: US, Japan. So gender wage gap started a long time ago, long before World war 2 and even when world war 2 was happening, men went to war and women stayed behind to do their job instead. Jobs such as producing products, farm works, household work, and whatever men’s job was before they let for war. This was very significant because this meant that when men went to war, women were the one who kept the country running and protected things so that everything would stay the same even without men. However as soon as the men came back, they took back control from women and kicked out the women so that they could hold position again.

Wage gap has existed in the past and continued to do even after all these years and the advancement of the world. Why is this so?
Therefore, I looked into some reasons as to why I think gender gap have continued to exist. One of the biggest reasons are that many women from older Generations are working jobs with additives and conditions of the past. This is very true because some employers still think that men should be paid more than women, especially if they’re old-fashioned. HR analyses do not focus on race and gender. They focus more on differences between pay grades instead of focusing on race and gender and employees are prohibited from talking about salary due to the pay secrecy which is no supposed to be legal.

There are a number of different explanations for the persistence of the gender gap and, in general, they are divided into two categories: structural explanations and merit-based explanations.

Some explanations focus on individual choices. For example, some suggests that women choose not to work in demanding careers like men. Women choose to stay home with children, which explains the gap in career outcomes. These explanations focus on individual merit. This perspective assumes that we will be rewarded for the effort we put in, regardless of factors like social class, gender, or race. It assumes a level playing field and if we aren’t successful, it’s because we haven’t worked hard enough.

But other explanations focus on broader forces. These are known as structural explanations, and they focus on things like institutional and cultural factors. One explanation is gender discrimination: women are paid less and have fewer opportunities than men because of outright sexism. Stereotypes about women’s abilities also play a role in these explanations. Gender stereotypes suggest that women are less competent than men, or are incapable to lead, for example.
Thank you for listening.

Gender Gap in Workplaces in Korea. (2021, Mar 14). Retrieved from https://papersowl.com/examples/gender-gap-in-workplaces-in-korea/