The Gender Pay Gap and the Equality 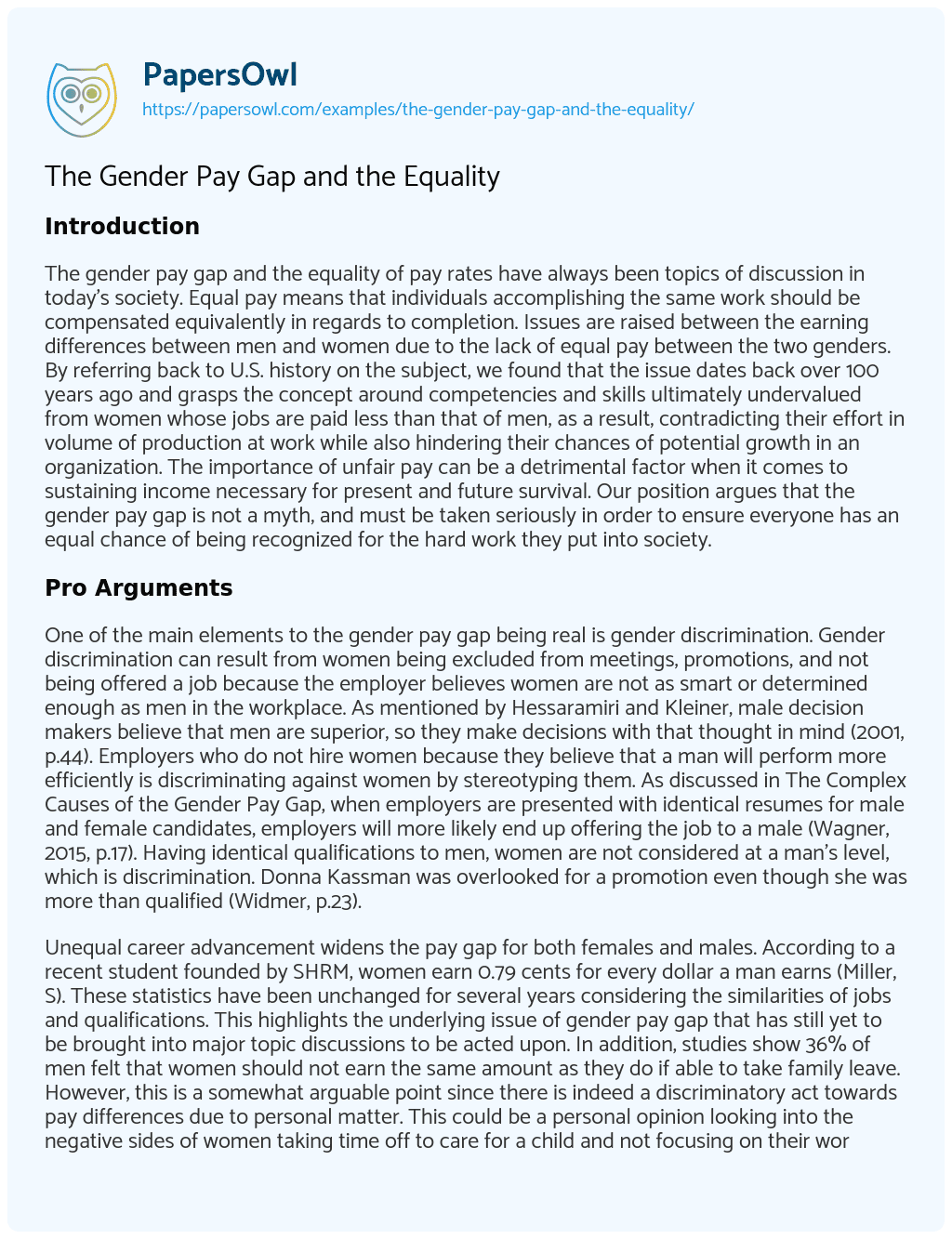 The gender pay gap and the equality of pay rates have always been topics of discussion in today’s society. Equal pay means that individuals accomplishing the same work should be compensated equivalently in regards to completion. Issues are raised between the earning differences between men and women due to the lack of equal pay between the two genders. By referring back to U.S. history on the subject, we found that the issue dates back over 100 years ago and grasps the concept around competencies and skills ultimately undervalued from women whose jobs are paid less than that of men, as a result, contradicting their effort in volume of production at work while also hindering their chances of potential growth in an organization. The importance of unfair pay can be a detrimental factor when it comes to sustaining income necessary for present and future survival. Our position argues that the gender pay gap is not a myth, and must be taken seriously in order to ensure everyone has an equal chance of being recognized for the hard work they put into society.

One of the main elements to the gender pay gap being real is gender discrimination. Gender discrimination can result from women being excluded from meetings, promotions, and not being offered a job because the employer believes women are not as smart or determined enough as men in the workplace. As mentioned by Hessaramiri and Kleiner, male decision makers believe that men are superior, so they make decisions with that thought in mind (2001, p.44). Employers who do not hire women because they believe that a man will perform more efficiently is discriminating against women by stereotyping them. As discussed in The Complex Causes of the Gender Pay Gap, when employers are presented with identical resumes for male and female candidates, employers will more likely end up offering the job to a male (Wagner, 2015, p.17). Having identical qualifications to men, women are not considered at a man’s level, which is discrimination. Donna Kassman was overlooked for a promotion even though she was more than qualified (Widmer, p.23).

Unequal career advancement widens the pay gap for both females and males. According to a recent student founded by SHRM, women earn 0.79 cents for every dollar a man earns (Miller, S). These statistics have been unchanged for several years considering the similarities of jobs and qualifications. This highlights the underlying issue of gender pay gap that has still yet to be brought into major topic discussions to be acted upon. In addition, studies show 36% of men felt that women should not earn the same amount as they do if able to take family leave. However, this is a somewhat arguable point since there is indeed a discriminatory act towards pay differences due to personal matter. This could be a personal opinion looking into the negative sides of women taking time off to care for a child and not focusing on their work. The differences in how men and women are seen towards one another sets the stage for even further pressures in the workplace.

54% of women experience harassment in the workplace (Zetlin, 2018). Due to these pressures women receive from men, the concept of a wage gap between the two genders further defines itself. Women decide to leave these “male-dominated” industries to protect their values and themselves, but in turn hurt their chances of promotions and career advancement. The “leaving” of women in these jobs is more of them being pushed out of these roles due to their refusal of complying with their male co-workers’ ideas. According to The Cut, “Sexual harassment has been identified as one of the most damaging and ubiquitous barriers to career success and satisfaction for women,” (Covert, 2017, para. 2). Since the harassment of women is so common in the workplace, females experience lower incomes because they are shut out from certain promotions. This causes women to face even more obstacles when finding a job, thus earning less than their male co-workers.

Women are willingly choosing low paying job as a result to the difference in pay wage. When speaking about the wage gap, people often tend to look at the same job with same skills to compare the differences each gender is getting pay for. Often times, this leads to findings that women are getting paid less than men per hour or annually for the same/similar job. However, research has shown that women are more likely to choose a career field that will result in lower pay for their earnings in total. Based on research by Harvard Business Review, “Many college majors that lead to high-paying roles in tech and engineering are male dominated, while majors that lead to lower-paying roles in social sciences and liberal arts tend to be female dominated, placing men in higher-paying career pathways, on average” (Carmichael, S). Yes, this is also a contributing factor adding up to wage gap. Overall, data does not account for the reason why women pick a career that lead to a lower pay but all comes down to their behaviors and choices leading up to the outcomes of their career. The argument here is that both women and men can be in the same major but it is the personal characteristics and determination that establish an outcome, or career, they want to achieve.

Women bringing the pay gap upon themselves by choosing to go into lower-paying jobs is a myth. Even though a large percentage of women are employed in lower paying jobs, their difference in industry choice compared to men still depicts a gap in wages per occupation, favoring the male gender. Regardless of the industry, women consistently earn less than their male colleagues. For example, it is fair to say that society views nursing and secretarial jobs as a more female-dominated industry; however, studies from Fortune Magazine depict that women still earn less than men in these fields. To further the argument, there is evidence that in most occupations across the board, wages fall when more women are present in the industry and in turn, the wages rise when there are more males present in the industry. In response to these unfair wages in the workplace, women ask for pay raises but only receive them 15% of the time while males receive their pay raises 20% of the time (Vagins, 2019) A reason for this is that females asking for a higher salary are seen as aggressive and are thus refused their request.

It is believed the gender pay gap is a myth considering the hours worked by both men and women, women make the choice to not work as many hours as men. Working overtime is not exclusive to only one gender, so when men decide to work more overtime, of course men will make more money than women. In a study by the Bureau of Labor Statistics, 27 percent of men compared to 15 percent of women work over 41 hours (Hymowitz, 2011, p.4). There is more than enough evidence to claim that women prefer to work fewer hours than men. As stated in Why the Gender Gap Won’t Go Away, despite the gap in earnings, women still decide to work fewer hours than men (Hymowitz, 2011). If women want the pay gap to be closed, all they must simply do is work the same hours as men. Their choice ends up causing the wage gap to show up with skewed results. There is a problem with this argument. Women do have a choice to work the hours they want, but the lack of work-family life balance programs lead women to choose lower paying jobs with more flexible hours.

Some believe the pay gap is due to women having children and leaving work to look after them. This myth is false because right off the bat, the gap in wages is present even before women create families, indicating that a distinction between male and female wages is already established. Fortune Magazine depicts that women before the age of 24 already earn less than their male co-workers; thus, proving that the differences in wages are present even before the main “child bearing” years experienced by women. When the hiring process is underworks, pregnant women are seen differently than men. Mothers-to-be as well as women already with children experience discrimination from employers and are “six times less likely” to be considered for a job when compared to childless women and men (Dunn, 2019, para. 11). While women are seen as less reliable to meet deadlines and scheduled appointments than men because of their “motherhood” tasks, men are seen as needing to be rewarded for having a new child and thus receive “daddy bonuses” to help their family out (Miller, 2018). SHRM explains that women who take a mid-career break from work earn less than men who also take similar mid-career breaks.

During our research to reveal that the gender pay gap is a myth, we found reasonable evidence to fortify our statements. Our analytical research proves that the lack of equal pay in society is indeed still in question by government entities as well as small sized companies to large sized corporations from across all job industries. Behavioral and work-life balance contributes to women earning less than men since it is found that they tend to work less according to the Bureau of Labor Statistics. We can conclude that personal factors such as lower paying jobs within respective career choices and degrees leads women to earn less. Even in so-called women dominated field, the research found relatively disproportionate annual pay between men and women. With the given evidence in our report, there should be a dramatic change in how equal pay is approached as well as the issue of the gender pay gap.”

The Gender Pay Gap and the Equality. (2021, May 20). Retrieved from https://papersowl.com/examples/the-gender-pay-gap-and-the-equality/

When do we Know when we have Achieved Gender Equality?