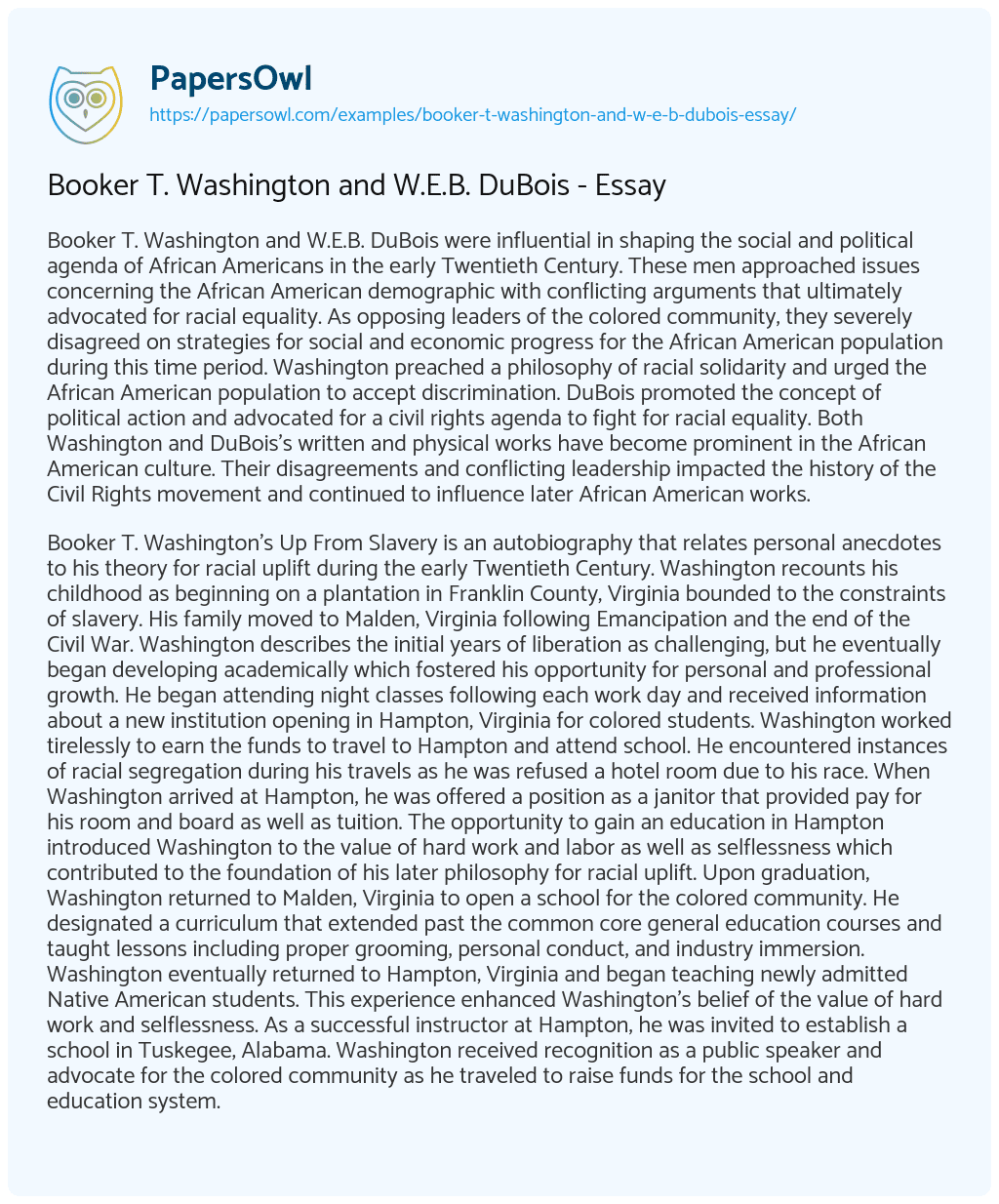 Booker T. Washington’s Up From Slavery is an autobiography that relates personal anecdotes to his theory for racial uplift during the early Twentieth Century. Washington recounts his childhood as beginning on a plantation in Franklin County, Virginia bounded to the constraints of slavery. His family moved to Malden, Virginia following Emancipation and the end of the Civil War. Washington describes the initial years of liberation as challenging, but he eventually began developing academically which fostered his opportunity for personal and professional growth. He began attending night classes following each work day and received information about a new institution opening in Hampton, Virginia for colored students. Washington worked tirelessly to earn the funds to travel to Hampton and attend school. He encountered instances of racial segregation during his travels as he was refused a hotel room due to his race. When Washington arrived at Hampton, he was offered a position as a janitor that provided pay for his room and board as well as tuition. The opportunity to gain an education in Hampton introduced Washington to the value of hard work and labor as well as selflessness which contributed to the foundation of his later philosophy for racial uplift. Upon graduation, Washington returned to Malden, Virginia to open a school for the colored community. He designated a curriculum that extended past the common core general education courses and taught lessons including proper grooming, personal conduct, and industry immersion. Washington eventually returned to Hampton, Virginia and began teaching newly admitted Native American students. This experience enhanced Washington’s belief of the value of hard work and selflessness. As a successful instructor at Hampton, he was invited to establish a school in Tuskegee, Alabama. Washington received recognition as a public speaker and advocate for the colored community as he traveled to raise funds for the school and education system. He received invitations to speak at various events, but he delivered his most prominent speech at the Atlanta Cotton States and International Exposition. During this speech, Washington expressed his thoughts on the proper way to address racial inequality and urge racial uplift. This speech launched Booker T. Washington’s role as an activist and leader for the African American community.

DuBois’s The Souls of Black Folk proposes the issue of racial divide during the early Twentieth Century. DuBois begins by addressing the need for the African American demographic to gain basic civil liberties such as the right to vote, the right to a general education, and to be treated as equal by law. He introduced the metaphor of the veil, symbolizing the visual manifestation of the color-line that separated African Americans from the rest of the general population. DuBois added that the veil contributes to the work ethic of the African American population as they have to work harder to see the world around them. DuBois transitioned The Souls of Black Folk into a historic recollection of a certain post-war period. He recalled the history of the Freedmen’s Bureau, the mission to aid former slaves who were freed by the Civil War, and its abandonment due to the rise of the Ku Klux Klan. DuBois highlighted the importance of the education system and its vital role in the progress of the African American community. He addressed his disputes with Booker T. Washington and reiterated his belief in the combination of a quality education and political activism to make strides towards racial equality.