Should Everyone Attend College? 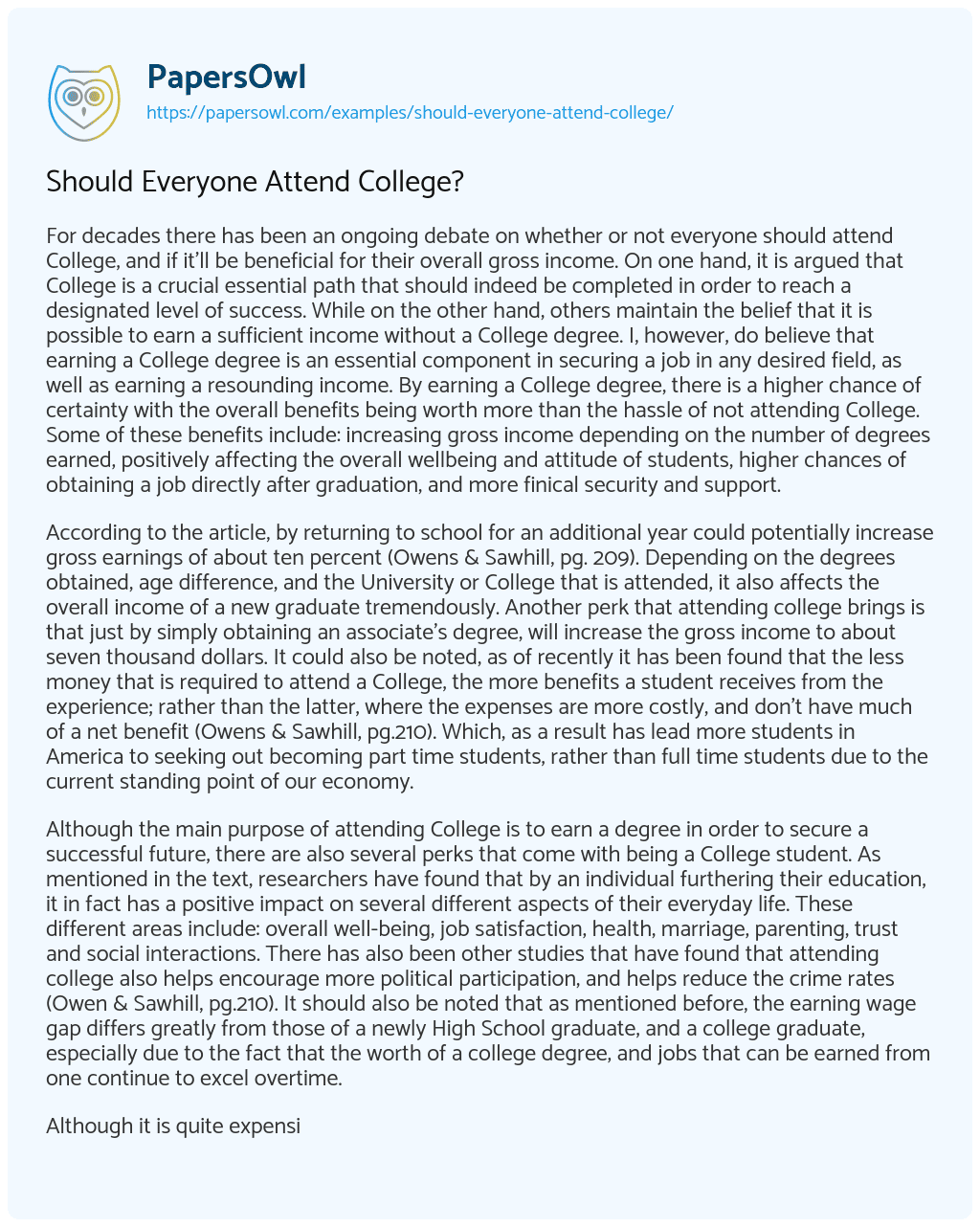 For decades there has been an ongoing debate on whether or not everyone should attend College, and if it’ll be beneficial for their overall gross income. On one hand, it is argued that College is a crucial essential path that should indeed be completed in order to reach a designated level of success. While on the other hand, others maintain the belief that it is possible to earn a sufficient income without a College degree. I, however, do believe that earning a College degree is an essential component in securing a job in any desired field, as well as earning a resounding income. By earning a College degree, there is a higher chance of certainty with the overall benefits being worth more than the hassle of not attending College. Some of these benefits include: increasing gross income depending on the number of degrees earned, positively affecting the overall wellbeing and attitude of students, higher chances of obtaining a job directly after graduation, and more finical security and support.

According to the article, by returning to school for an additional year could potentially increase gross earnings of about ten percent (Owens & Sawhill, pg. 209). Depending on the degrees obtained, age difference, and the University or College that is attended, it also affects the overall income of a new graduate tremendously. Another perk that attending college brings is that just by simply obtaining an associate’s degree, will increase the gross income to about seven thousand dollars. It could also be noted, as of recently it has been found that the less money that is required to attend a College, the more benefits a student receives from the experience; rather than the latter, where the expenses are more costly, and don’t have much of a net benefit (Owens & Sawhill, pg.210). Which, as a result has lead more students in America to seeking out becoming part time students, rather than full time students due to the current standing point of our economy.

Although the main purpose of attending College is to earn a degree in order to secure a successful future, there are also several perks that come with being a College student. As mentioned in the text, researchers have found that by an individual furthering their education, it in fact has a positive impact on several different aspects of their everyday life. These different areas include: overall well-being, job satisfaction, health, marriage, parenting, trust and social interactions. There has also been other studies that have found that attending college also helps encourage more political participation, and helps reduce the crime rates (Owen & Sawhill, pg.210). It should also be noted that as mentioned before, the earning wage gap differs greatly from those of a newly High School graduate, and a college graduate, especially due to the fact that the worth of a college degree, and jobs that can be earned from one continue to excel overtime.

Although it is quite expensive to attend College, the ending reward is worth every challenge. Not only does earning a college degree help reach success working in a particular field, it also increases the chance of sustaining a better living. For example, it is no secret that the average American adult cannot live off of a minimum wage paycheck. There’s just entirely too many monthly bills, and fees that need to be paid, not including the taxes, and fees taken out of a single paycheck before it is issued. In fact, the State, City, and County that one resides in also affects the amount of pay they receive, and at what rate on the hour. Thus, making it more difficult to make an honest financial living to support a single household, let alone a family. Which is why, everyone should strive to go to either college, vocational school, or even earn a few certifications to increase their chances of earning more money to provide a comfortable living setting.

As of recent years, Colleges across North America have experienced a major increase of STEM graduates. A study completed by the Census Bureau found that the highest paying major is engineering, along with math and computer majors. While majors with the lowest pay rate included Education, Arts, and Psychology. It was also found that the highest occupation area is architecture and engineering, followed by computer, math, and management courses (Owens & Sawhill, pg. 216). There has also been a major increase in the jobs that are in correlation with the degrees mentioned. These majors and degrees mentioned could also be used for a countless number of jobs; which, could be why it is harder for students who major in subjects that are not higher up in demand in the work field. Finances also play a major role in this. I myself, have noticed over the years that more and more STEM programs, grants and scholarships have been created across the United States. This is more than likely due to the alarming rate at which these jobs continue to grow and expand into different sub fields, requiring more research and eager individuals to do it. It should also be noted that every degree is not held at the same standard. Meaning, that every degree is worth something different, those of a STEM degree are worth hundreds if not thousands of dollars; while, Education and Art degrees aren’t substantially worth as much. Furthermore, this could be tied back to the fact that certain work force fields are in higher demand than others.

I believe that if more students here in North America attended college, the poverty rate and crime rate would decrease. I also believe that it could help lead to more community involvement with Alumni from all over the world; which could potentially lead to them being able to grant those who are less fortunate the chance of obtaining a higher education. Attending college could also help get rid of the wage gap, and many of the equality issues that Women face, and Women of color particularly. I also believe that by attending college, it could help sustain the future of society. Thus, since, the motto “the children are the future”, is supposed to reside and be encouraging words for generations to come to attend college and try and make a change one day.

In conclusion, I believe that attending College is one of the best decisions that anyone can possibly make to help create a more sufficient future for themselves and those around them. I am also very hopeful that one day it will not be as expensive, so that individuals from low-income families have a chance as well at better themselves and their future. Not only does attending College grant the opportunity of earning a degree, it also offers the opportunity to grow and build healthy long term relationships with peers. And lastly, attending College helps increase the overall gross income, which in return is more money earned to live a stable, happy life.

Should Everyone Attend College?. (2019, Nov 27). Retrieved from https://papersowl.com/examples/should-everyone-attend-college/

Attend College after Four Years of High School or Not?