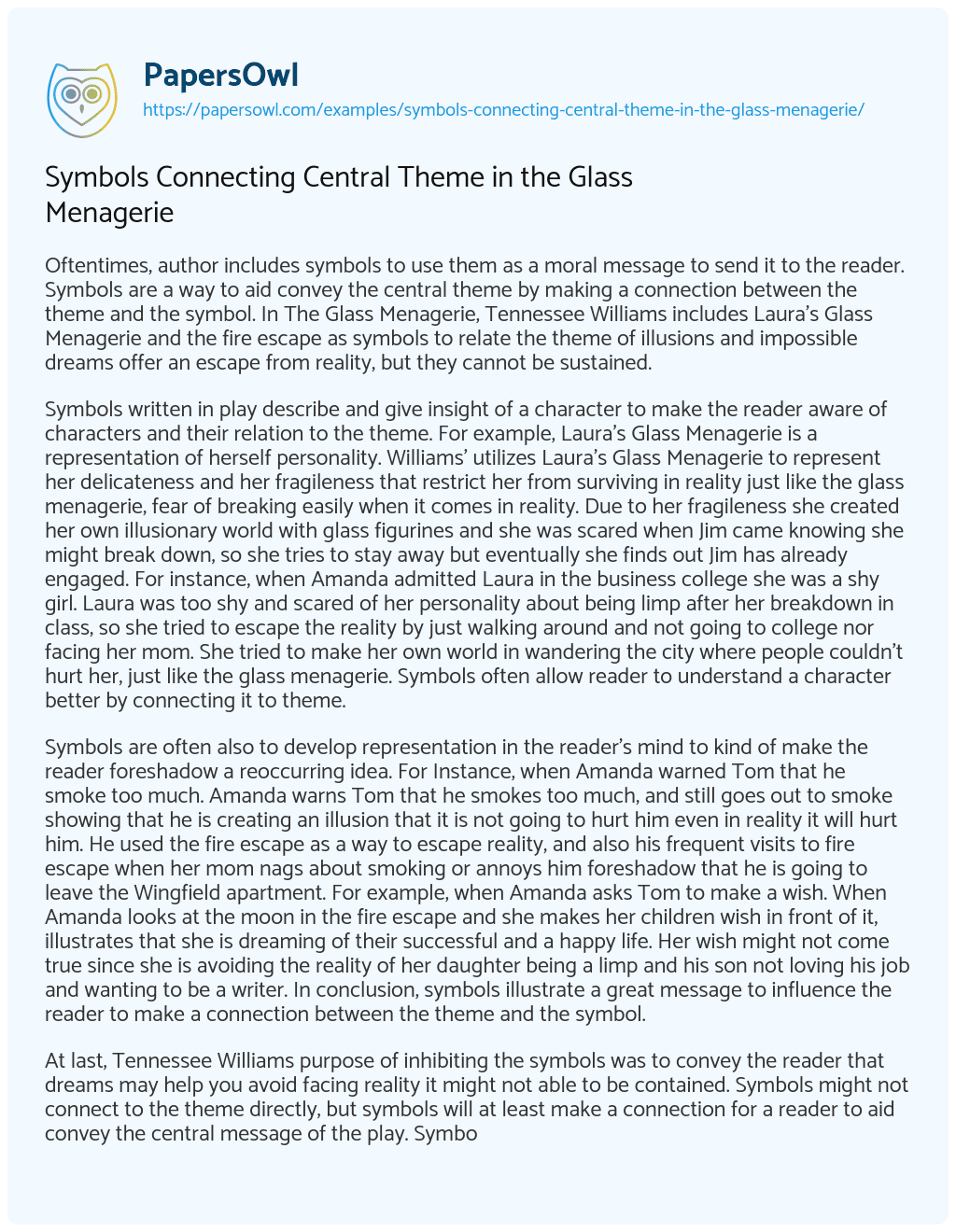 Oftentimes, author includes symbols to use them as a moral message to send it to the reader. Symbols are a way to aid convey the central theme by making a connection between the theme and the symbol. In The Glass Menagerie, Tennessee Williams includes Laura’s Glass Menagerie and the fire escape as symbols to relate the theme of illusions and impossible dreams offer an escape from reality, but they cannot be sustained.

Symbols written in play describe and give insight of a character to make the reader aware of characters and their relation to the theme. For example, Laura’s Glass Menagerie is a representation of herself personality. Williams’ utilizes Laura’s Glass Menagerie to represent her delicateness and her fragileness that restrict her from surviving in reality just like the glass menagerie, fear of breaking easily when it comes in reality. Due to her fragileness she created her own illusionary world with glass figurines and she was scared when Jim came knowing she might break down, so she tries to stay away but eventually she finds out Jim has already engaged. For instance, when Amanda admitted Laura in the business college she was a shy girl. Laura was too shy and scared of her personality about being limp after her breakdown in class, so she tried to escape the reality by just walking around and not going to college nor facing her mom. She tried to make her own world in wandering the city where people couldn’t hurt her, just like the glass menagerie. Symbols often allow reader to understand a character better by connecting it to theme.

Symbols are often also to develop representation in the reader’s mind to kind of make the reader foreshadow a reoccurring idea. For Instance, when Amanda warned Tom that he smoke too much. Amanda warns Tom that he smokes too much, and still goes out to smoke showing that he is creating an illusion that it is not going to hurt him even in reality it will hurt him. He used the fire escape as a way to escape reality, and also his frequent visits to fire escape when her mom nags about smoking or annoys him foreshadow that he is going to leave the Wingfield apartment. For example, when Amanda asks Tom to make a wish. When Amanda looks at the moon in the fire escape and she makes her children wish in front of it, illustrates that she is dreaming of their successful and a happy life. Her wish might not come true since she is avoiding the reality of her daughter being a limp and his son not loving his job and wanting to be a writer. In conclusion, symbols illustrate a great message to influence the reader to make a connection between the theme and the symbol.

At last, Tennessee Williams purpose of inhibiting the symbols was to convey the reader that dreams may help you avoid facing reality it might not able to be contained. Symbols might not connect to the theme directly, but symbols will at least make a connection for a reader to aid convey the central message of the play. Symbols are great way to represent a idea or to light a bulb in readers mind by either foreshadowing or giving them an illustration, which will aid them finding a deep hidden message.

Symbols Connecting Central Theme in the Glass Menagerie. (2019, May 18). Retrieved from https://papersowl.com/examples/symbols-connecting-central-theme-in-the-glass-menagerie/

Escape Theme in the Glass Menagerie