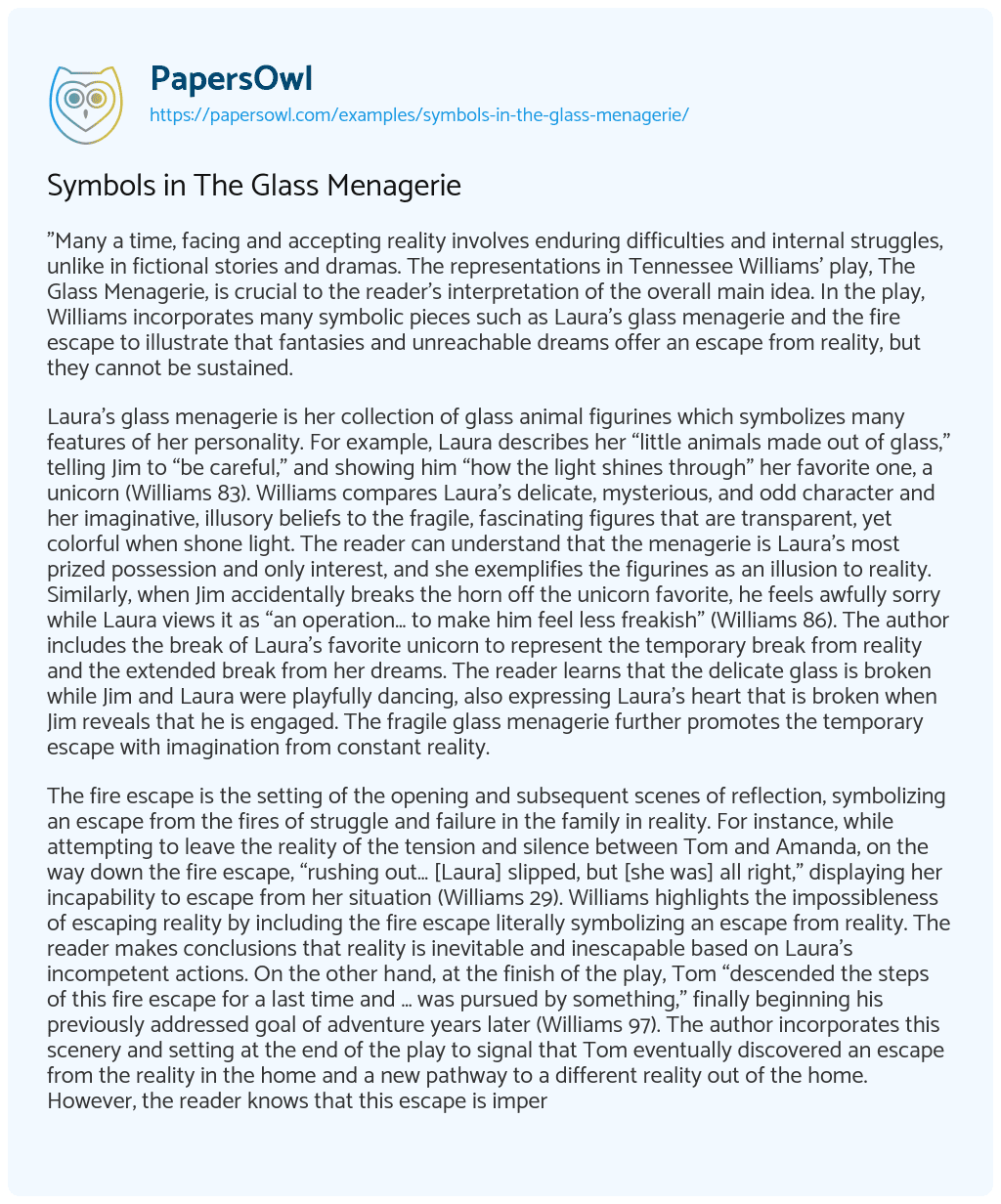 “Many a time, facing and accepting reality involves enduring difficulties and internal struggles, unlike in fictional stories and dramas. The representations in Tennessee Williams’ play, The Glass Menagerie, is crucial to the reader’s interpretation of the overall main idea. In the play, Williams incorporates many symbolic pieces such as Laura’s glass menagerie and the fire escape to illustrate that fantasies and unreachable dreams offer an escape from reality, but they cannot be sustained.

Laura’s glass menagerie is her collection of glass animal figurines which symbolizes many features of her personality. For example, Laura describes her “little animals made out of glass,” telling Jim to “be careful,” and showing him “how the light shines through” her favorite one, a unicorn (Williams 83). Williams compares Laura’s delicate, mysterious, and odd character and her imaginative, illusory beliefs to the fragile, fascinating figures that are transparent, yet colorful when shone light. The reader can understand that the menagerie is Laura’s most prized possession and only interest, and she exemplifies the figurines as an illusion to reality. Similarly, when Jim accidentally breaks the horn off the unicorn favorite, he feels awfully sorry while Laura views it as “an operation… to make him feel less freakish” (Williams 86). The author includes the break of Laura’s favorite unicorn to represent the temporary break from reality and the extended break from her dreams. The reader learns that the delicate glass is broken while Jim and Laura were playfully dancing, also expressing Laura’s heart that is broken when Jim reveals that he is engaged. The fragile glass menagerie further promotes the temporary escape with imagination from constant reality.

The fire escape is the setting of the opening and subsequent scenes of reflection, symbolizing an escape from the fires of struggle and failure in the family in reality. For instance, while attempting to leave the reality of the tension and silence between Tom and Amanda, on the way down the fire escape, “rushing out… [Laura] slipped, but [she was] all right,” displaying her incapability to escape from her situation (Williams 29). Williams highlights the impossibleness of escaping reality by including the fire escape literally symbolizing an escape from reality. The reader makes conclusions that reality is inevitable and inescapable based on Laura’s incompetent actions. On the other hand, at the finish of the play, Tom “descended the steps of this fire escape for a last time and … was pursued by something,” finally beginning his previously addressed goal of adventure years later (Williams 97). The author incorporates this scenery and setting at the end of the play to signal that Tom eventually discovered an escape from the reality in the home and a new pathway to a different reality out of the home. However, the reader knows that this escape is imperfect and incomplete as old memories of Laura and the Wingfield apartment continue to follow him after his departure. In the end, the fire escape provides a sense of helplessness and weakness of eternally escaping reality.

All in all, Williams utilizes the symbolic meanings of the glass menagerie and fire escape to portray the unsustainable escape from reality. In truth, the reality is absolutely tight and tough and impossible to avoid or evade. One should work hard to accept it and respond to it in a positive way.”

Symbols in The Glass Menagerie. (2021, Mar 16). Retrieved from https://papersowl.com/examples/symbols-in-the-glass-menagerie/