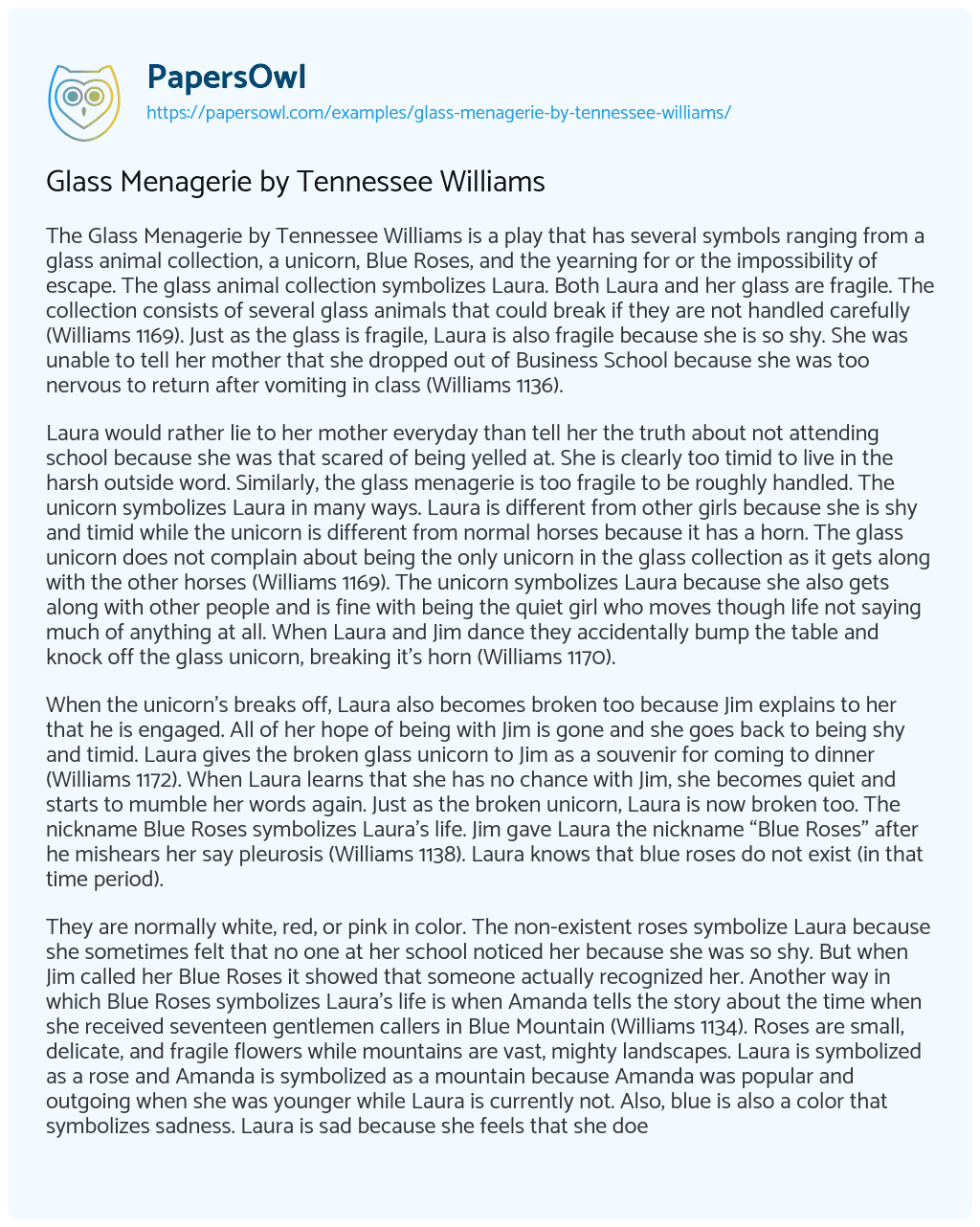 The Glass Menagerie by Tennessee Williams is a play that has several symbols ranging from a glass animal collection, a unicorn, Blue Roses, and the yearning for or the impossibility of escape. The glass animal collection symbolizes Laura. Both Laura and her glass are fragile. The collection consists of several glass animals that could break if they are not handled carefully (Williams 1169). Just as the glass is fragile, Laura is also fragile because she is so shy. She was unable to tell her mother that she dropped out of Business School because she was too nervous to return after vomiting in class (Williams 1136).

Laura would rather lie to her mother everyday than tell her the truth about not attending school because she was that scared of being yelled at. She is clearly too timid to live in the harsh outside word. Similarly, the glass menagerie is too fragile to be roughly handled. The unicorn symbolizes Laura in many ways. Laura is different from other girls because she is shy and timid while the unicorn is different from normal horses because it has a horn. The glass unicorn does not complain about being the only unicorn in the glass collection as it gets along with the other horses (Williams 1169). The unicorn symbolizes Laura because she also gets along with other people and is fine with being the quiet girl who moves though life not saying much of anything at all. When Laura and Jim dance they accidentally bump the table and knock off the glass unicorn, breaking it’s horn (Williams 1170).

When the unicorn’s breaks off, Laura also becomes broken too because Jim explains to her that he is engaged. All of her hope of being with Jim is gone and she goes back to being shy and timid. Laura gives the broken glass unicorn to Jim as a souvenir for coming to dinner (Williams 1172). When Laura learns that she has no chance with Jim, she becomes quiet and starts to mumble her words again. Just as the broken unicorn, Laura is now broken too. The nickname Blue Roses symbolizes Laura’s life. Jim gave Laura the nickname “Blue Roses” after he mishears her say pleurosis (Williams 1138). Laura knows that blue roses do not exist (in that time period).

They are normally white, red, or pink in color. The non-existent roses symbolize Laura because she sometimes felt that no one at her school noticed her because she was so shy. But when Jim called her Blue Roses it showed that someone actually recognized her. Another way in which Blue Roses symbolizes Laura’s life is when Amanda tells the story about the time when she received seventeen gentlemen callers in Blue Mountain (Williams 1134). Roses are small, delicate, and fragile flowers while mountains are vast, mighty landscapes. Laura is symbolized as a rose and Amanda is symbolized as a mountain because Amanda was popular and outgoing when she was younger while Laura is currently not. Also, blue is also a color that symbolizes sadness. Laura is sad because she feels that she does not fit into the world and Amanda is sad because she does not get the glory of the good old days anymore since she is now old and worn out.

Throughout the whole play the characters seem to have a yearning for escape but escaping is impossible without consequences. Laura escapes reality with her glass menagerie and her father’s old records, Tom wants to leave the apartment, and Amanda wants to escape her life as a lonely wife. Amanda does not want Laura to live the rest of her life listening to her father’s old records or entertaining herself with the glass menagerie (Williams 1137). Since Amanda knows that Laura has no future in business she wants Laura to get a gentleman caller, but Laura wants to escape this reality and go back to living in her imaginary world because she is such a quiet introvert. Amanda regrets choosing her husband over the other gentlemen callers (Williams 1135). She wishes she could escape to the time when she was younger and all the men were interested in her. Tom wants to escape his life at the apartment and the fights he has with his mother. He also wants to escape his work at the warehouse because he wants to write poetry instead. He goes to the movies when he wants to escape the reality of the world because at the movies he can find adventure. Tom tells Laura about the magician that he sees at the movies. The magician was nailed into a coffin but he got out of the coffin without removing any of the nails (Williams 1143).

In reality this is not possible and that is why it is a magic trick. The magician’s act symbolizes Tom’s life because he feels like he is stuck in his own coffin where the coffin is the apartment, and he is in a position where if he wanted to leave the apartment then he would damage something or hurt someone in the process. At the end of the play When Tom leaves the apartment to join the Merchant Marines he cannot stop thinking about Laura, but he does not mind leaving behind Amanda because they fought all the time.