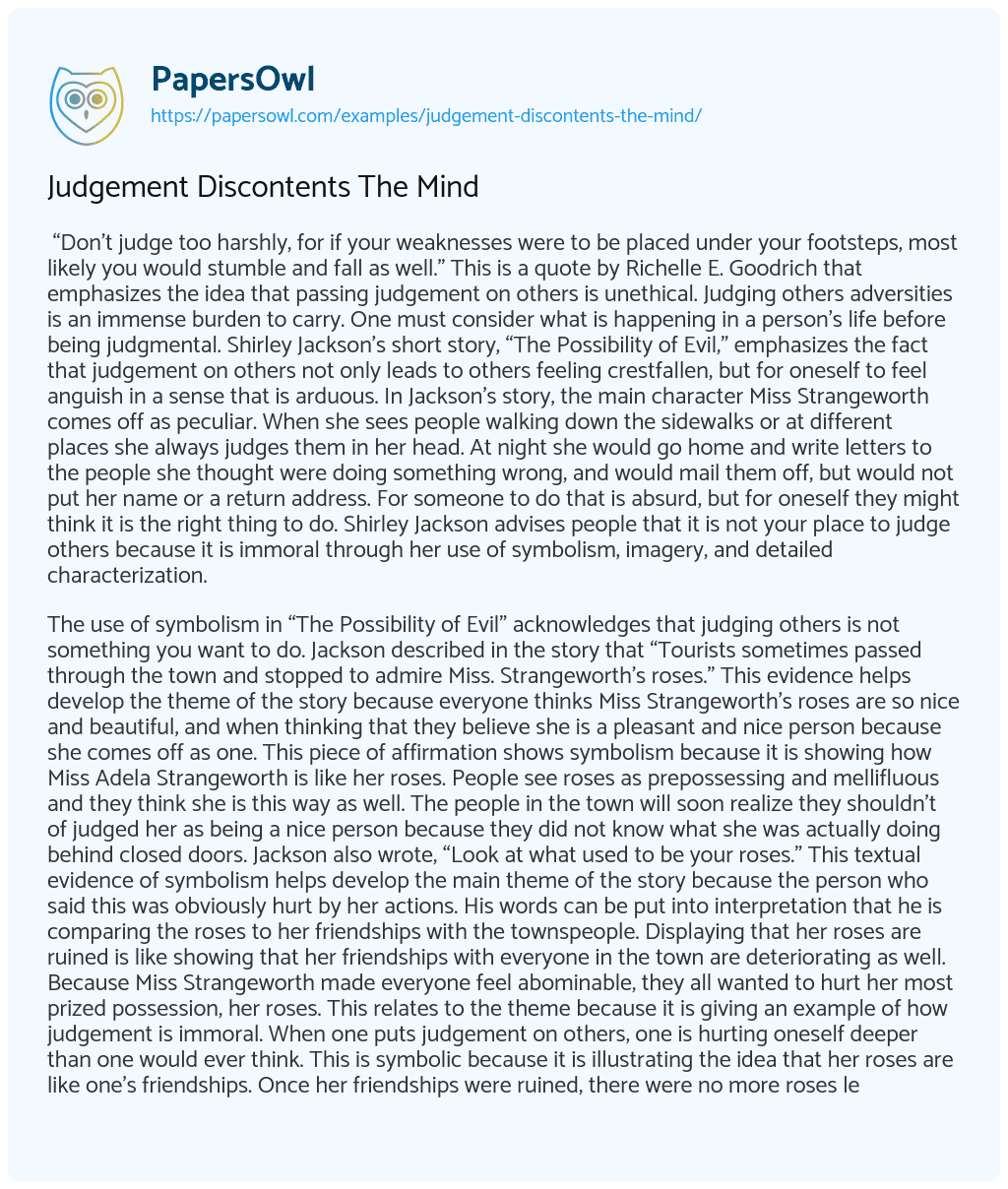 “Don’t judge too harshly, for if your weaknesses were to be placed under your footsteps, most likely you would stumble and fall as well.” This is a quote by Richelle E. Goodrich that emphasizes the idea that passing judgement on others is unethical. Judging others adversities is an immense burden to carry. One must consider what is happening in a person’s life before being judgmental. Shirley Jackson’s short story, “The Possibility of Evil,” emphasizes the fact that judgement on others not only leads to others feeling crestfallen, but for oneself to feel anguish in a sense that is arduous. In Jackson’s story, the main character Miss Strangeworth comes off as peculiar. When she sees people walking down the sidewalks or at different places she always judges them in her head. At night she would go home and write letters to the people she thought were doing something wrong, and would mail them off, but would not put her name or a return address. For someone to do that is absurd, but for oneself they might think it is the right thing to do. Shirley Jackson advises people that it is not your place to judge others because it is immoral through her use of symbolism, imagery, and detailed characterization.

The use of symbolism in “The Possibility of Evil” acknowledges that judging others is not something you want to do. Jackson described in the story that “Tourists sometimes passed through the town and stopped to admire Miss. Strangeworth’s roses.” This evidence helps develop the theme of the story because everyone thinks Miss Strangeworth’s roses are so nice and beautiful, and when thinking that they believe she is a pleasant and nice person because she comes off as one. This piece of affirmation shows symbolism because it is showing how Miss Adela Strangeworth is like her roses. People see roses as prepossessing and mellifluous and they think she is this way as well. The people in the town will soon realize they shouldn’t of judged her as being a nice person because they did not know what she was actually doing behind closed doors. Jackson also wrote, “Look at what used to be your roses.” This textual evidence of symbolism helps develop the main theme of the story because the person who said this was obviously hurt by her actions. His words can be put into interpretation that he is comparing the roses to her friendships with the townspeople. Displaying that her roses are ruined is like showing that her friendships with everyone in the town are deteriorating as well. Because Miss Strangeworth made everyone feel abominable, they all wanted to hurt her most prized possession, her roses. This relates to the theme because it is giving an example of how judgement is immoral. When one puts judgement on others, one is hurting oneself deeper than one would ever think. This is symbolic because it is illustrating the idea that her roses are like one’s friendships. Once her friendships were ruined, there were no more roses left.

The use of imagery in “The Possibility of Evil” shows that judging others immoral. Jackson wrote, “The sun was shining, the air was fresh and clear.” This evidence is imagery because it makes others believe that everything seems nice and all right. This helps develop the theme because it makes you think that everyone will be kind to each other. While reading this one could be judging the story because no one knows what will happen. The first instinct was to think this was not going to be hurtful to others. Once the plot of the story is over, people will realize they should not have judged the anecdote to begin with, because no one knows the background. This lesson should be acquired in life as well. Do not judge a book by it’s cover. Jackson also stated, “Miss Strangeworth awakened the next morning with a feeling of intense happiness and for a minute wondered why, then remembered that this morning, three people would open her letters.” The evidence here relates to imagery because it makes the readers picture what she is acting like during this time. This evidence helps develop the theme because it lets people see how truly excited she is about having people open her rude letters she wrote. Picturing how happy Miss Strangeworth gets while bringing others down is completely terrible. It does not bother her that she judges others, and in the real world not feeling sorry after judging someone is immoral and not the right thing to do.

The use of characterization in “The Possibility of Evil” helps show that judging other is a corrupt thing to do. Jackson wrote, “A princess can see a lot of trouble sometimes. How old is her highness now?” The text shows characterization by how she comes off to other people and what rude things she says to make herself seem as if she is not a likable person. This evidence helps develop the theme because when Miss Strangeworth says this she is trying to tell the parents that their daughter is spoiled. When she judges a little kid, it makes people see that she is discourteous, and she should not be judging the little kid or the parents. They should be able to raise their own daughter however they want too, and with Miss Strangeworth judging them it could alter this infant’s life forever. In life, if someone were to say that to others, they would come off as rude and disrespectful. Not only because it is the wrong thing to say, but because it is not her place to do so. Jackson also wrote, “Didn’t you ever see an idiot child before? Some people just should not have children should they?” This evidence helps develop the theme as well because in Miss Strangeworth’s letters she is characterized as an ill-mannered person. She is calling the child an idiot and saying that these parents are not fit to have a baby, which is completely hostile of her to say. When someone comes off as rude and thinks it is okay to judge people it shows their true act of character and proves that they do not care about others’ feelings.

Judging others is an unethical thing to do because it is not you your place to do so. In the short story “The Possibility of Evil” symbolism, imagery, and characterization is used to help develop the theme of judgement. There is more to judging others than what meets the eye. People judge to make themselves feel better, and that is a horrible way of handling your own feelings. When about to judge another think about how it will make the other person feel. When one judges others it is hard because it stays with them for the rest of their life and that is a hard burden to carry.

“The Eyes are Useless when the Mind is Blind”. – Unknown

Mind According to Bible

About Teenagers’ Mind in the Catcher in the Rye

Schizophrenia Symptoms and Treatment in a Beautiful Mind