Global Issues in “A Doll’s House” 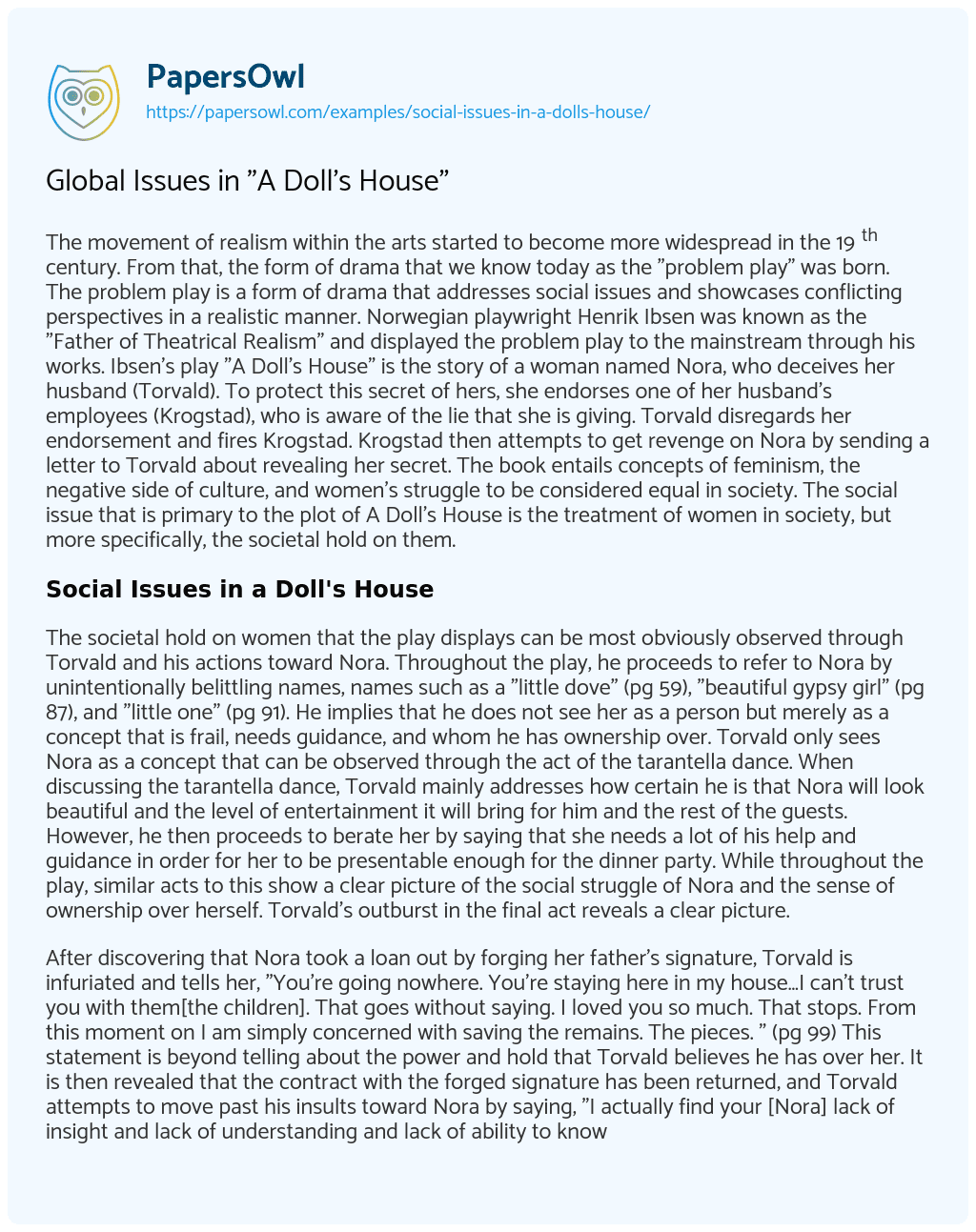 The movement of realism within the arts started to become more widespread in the 19th century. From that, the form of drama that we know today as the “problem play” was born. The problem play is a form of drama that addresses social issues and showcases conflicting perspectives in a realistic manner. Norwegian playwright Henrik Ibsen was known as the “Father of Theatrical Realism” and displayed the problem play to the mainstream through his works. Ibsen’s play “A Doll’s House” is the story of a woman named Nora, who deceives her husband (Torvald). To protect this secret of hers, she endorses one of her husband’s employees (Krogstad), who is aware of the lie that she is giving. Torvald disregards her endorsement and fires Krogstad. Krogstad then attempts to get revenge on Nora by sending a letter to Torvald about revealing her secret. The book entails concepts of feminism, the negative side of culture, and women’s struggle to be considered equal in society. The social issue that is primary to the plot of A Doll’s House is the treatment of women in society, but more specifically, the societal hold on them.

Social Issues in a Doll’s House

The societal hold on women that the play displays can be most obviously observed through Torvald and his actions toward Nora. Throughout the play, he proceeds to refer to Nora by unintentionally belittling names, names such as a “little dove” (pg 59), “beautiful gypsy girl” (pg 87), and “little one” (pg 91). He implies that he does not see her as a person but merely as a concept that is frail, needs guidance, and whom he has ownership over. Torvald only sees Nora as a concept that can be observed through the act of the tarantella dance. When discussing the tarantella dance, Torvald mainly addresses how certain he is that Nora will look beautiful and the level of entertainment it will bring for him and the rest of the guests. However, he then proceeds to berate her by saying that she needs a lot of his help and guidance in order for her to be presentable enough for the dinner party. While throughout the play, similar acts to this show a clear picture of the social struggle of Nora and the sense of ownership over herself. Torvald’s outburst in the final act reveals a clear picture.

After discovering that Nora took a loan out by forging her father’s signature, Torvald is infuriated and tells her, “You’re going nowhere. You’re staying here in my house…I can’t trust you with them[the children]. That goes without saying. I loved you so much. That stops. From this moment on I am simply concerned with saving the remains. The pieces. ” (pg 99) This statement is beyond telling about the power and hold that Torvald believes he has over her. It is then revealed that the contract with the forged signature has been returned, and Torvald attempts to move past his insults toward Nora by saying, “I actually find your [Nora] lack of insight and lack of understanding and lack of ability to know what to do rather attractive. It makes me realize that I am a man and you are a woman. Are you cross with me? … Don’t be. I promise you, Nora. I’ve forgiven you.”” (pg 101). Not only is he insulting her, but he is simultaneously insinuating that she should be thankful that he considers her “faults” to be attractive, as well as implying that these “faults” are what make her less than him in the perspective of society.

Women in society at this time had very little agency when it came to most matters in their lives. Nora got into her situation because she forged her father’s signature to take out a loan. However, she would not have needed to do that if she had the right to initially take out the loan in her own name. Her expected role in society was to be a housewife, uphold her husband’s reputation and expectations, and look beautiful, all while doing it. Things even go as far as the preference of activities that her husband has for her; in one instance Torvald attempts to explain why a trivial activity such as embroidery is superior to knitting by saying: “” [Embroidery] it’s far more beautiful, don’t you think?… But knitting. It’s just bloody ugly. Look. Your arms are all squashed up. The knitting needles going up and down. Up and down. There’s something Chinese about it. ” (pg 88) In A Doll’s House, Nora has accepted this type of treatment from Torvald, believing it is normal and does not have a revelation about it until much later in the story.

Towards the end of the story, Torvald confesses that he will never forgive her for forging her father’s signature and then, after he discovers that the issue has been resolved and that his reputation is safe, he flips his feelings around by then confessing that he is so glad to be back with his wife and how much he loves her. This is when Nora finally snaps. She finally realizes that she’s been in a trance of sorts and has been treated like a doll throughout her entire life, starting with her father and then with Torvald after getting married. She explains, ” [Torvald] You never loved me. You just enjoyed the idea of being in love with me. … [my father] called me his doll. He played with me like I used to play with my dolls…[Torvald] You took me from my father’s house to yours. And the same thing happened here. You furnished according to your taste. So I developed the same taste as you. ” She then dresses herself up and proceeds to leave home, her children, and her belonging behind. And slams the door behind her on the way out.

Nora slamming the door at the end of the play leaves the possibility of the outcome up to interpretation. Some could say that Nora leaves town and starts a new life for herself, while others may debate the reality of it and that she does not have any skill sets to begin something for herself. This ending of Nora leaving her family caused some uproar at the time within society and those who watched it, so much that some productions changed the ending to where she returns back to Torvald. While against Ibsen’s original vision, this was done to make the audience less uncomfortable. Changing the end in some productions shows that society wasn’t ready for women to be displayed in a place of power where they are making decisions of that caliber.

The most prevalent issue in A Doll’s House is the treatment of women in society, but more specifically, the societal hold on them. Throughout the play, we can see how Torvald represents the holding of women and the treatment that they must face in physical form. While Nora represents how women were viewed, and perceived in society, and the reality of finally taking action about it. While the treatment of women has gotten much better, recent times have reminded us that much work still has to be done. By the end of the play, Nora decided that she was not her Fathers’ or Torvalds’ doll anymore, just like women of today have decided that they aren’t just a plaything anymore.

Global Issues in "A Doll's House". (2020, Feb 10). Retrieved from https://papersowl.com/examples/social-issues-in-a-dolls-house/