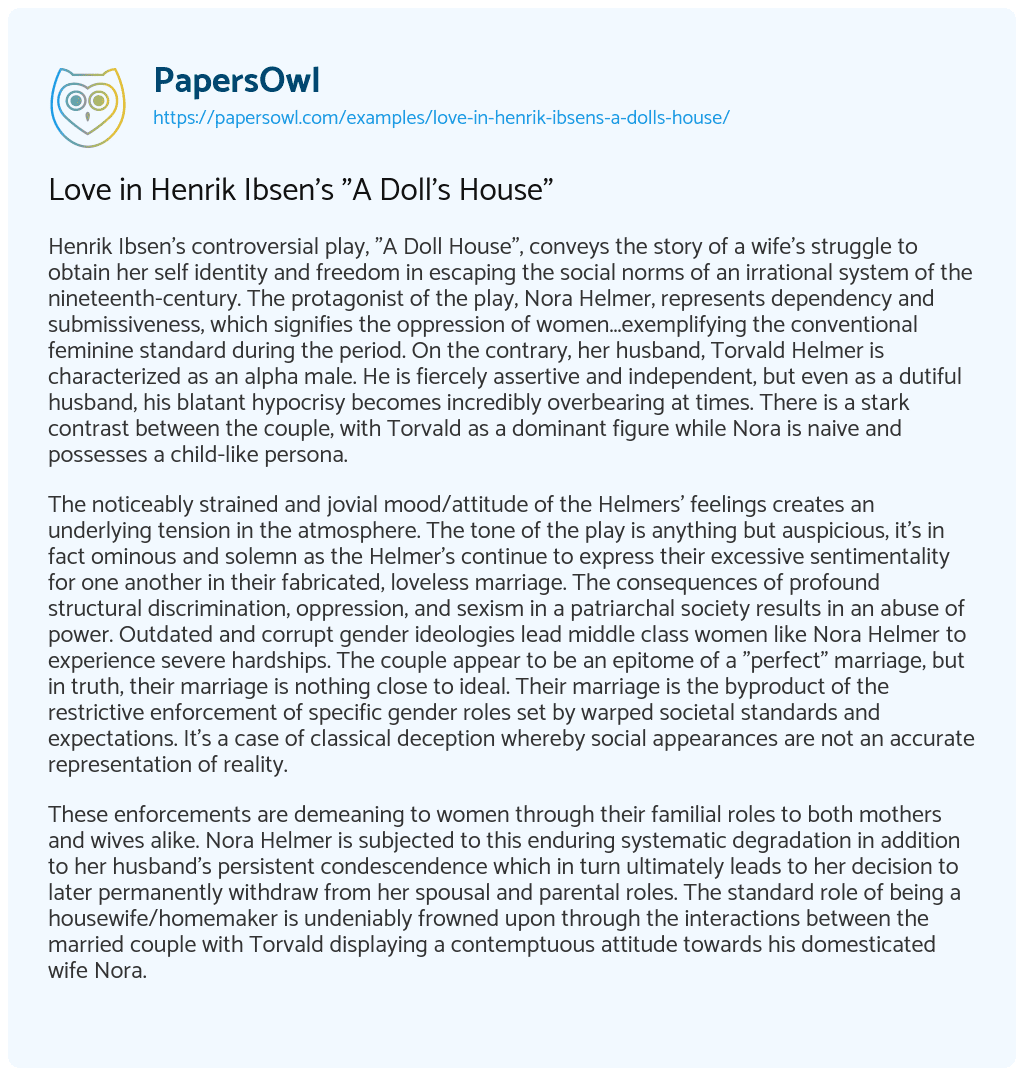 Henrik Ibsen’s controversial play, “A Doll House”, conveys the story of a wife’s struggle to obtain her self identity and freedom in escaping the social norms of an irrational system of the nineteenth-century. The protagonist of the play, Nora Helmer, represents dependency and submissiveness, which signifies the oppression of women…exemplifying the conventional feminine standard during the period. On the contrary, her husband, Torvald Helmer is characterized as an alpha male. He is fiercely assertive and independent, but even as a dutiful husband, his blatant hypocrisy becomes incredibly overbearing at times. There is a stark contrast between the couple, with Torvald as a dominant figure while Nora is naive and possesses a child-like persona.

The noticeably strained and jovial mood/attitude of the Helmers’ feelings creates an underlying tension in the atmosphere. The tone of the play is anything but auspicious, it’s in fact ominous and solemn as the Helmer’s continue to express their excessive sentimentality for one another in their fabricated, loveless marriage. The consequences of profound structural discrimination, oppression, and sexism in a patriarchal society results in an abuse of power. Outdated and corrupt gender ideologies lead middle class women like Nora Helmer to experience severe hardships. The couple appear to be an epitome of a “perfect” marriage, but in truth, their marriage is nothing close to ideal. Their marriage is the byproduct of the restrictive enforcement of specific gender roles set by warped societal standards and expectations. It’s a case of classical deception whereby social appearances are not an accurate representation of reality.

These enforcements are demeaning to women through their familial roles to both mothers and wives alike. Nora Helmer is subjected to this enduring systematic degradation in addition to her husband’s persistent condescendence which in turn ultimately leads to her decision to later permanently withdraw from her spousal and parental roles. The standard role of being a housewife/homemaker is undeniably frowned upon through the interactions between the married couple with Torvald displaying a contemptuous attitude towards his domesticated wife Nora.

Femininism and Masculinity in Henrik Ibsen’s “A Doll’s House”