Deception in a Doll’s House 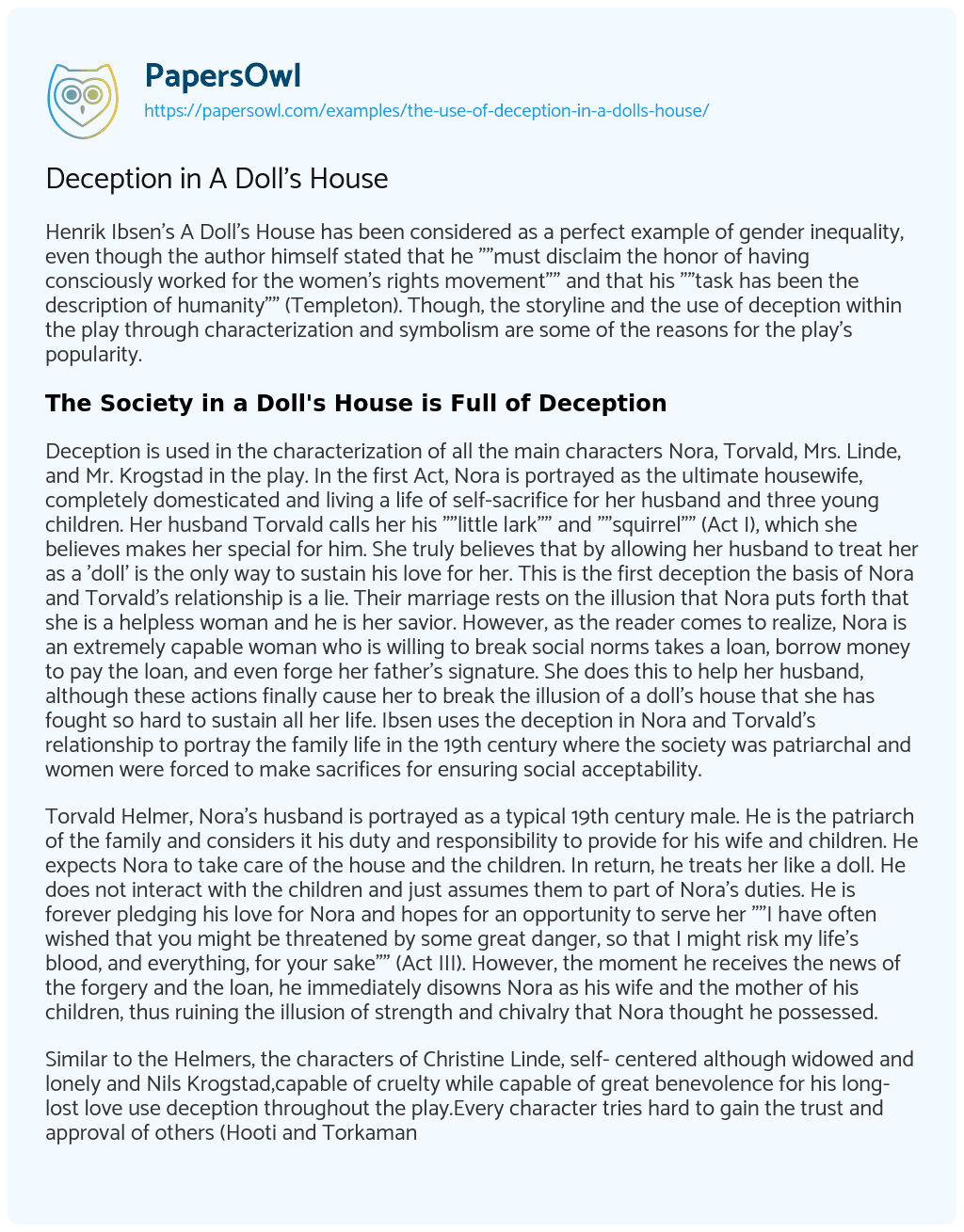 Henrik Ibsen’s A Doll’s House has been considered as a perfect example of gender inequality, even though the author himself stated that he “”must disclaim the honor of having consciously worked for the women’s rights movement”” and that his “”task has been the description of humanity”” (Templeton). Though, the storyline and the use of deception within the play through characterization and symbolism are some of the reasons for the play’s popularity.

The Society in a Doll’s House is Full of Deception

Deception is used in the characterization of all the main characters Nora, Torvald, Mrs. Linde, and Mr. Krogstad in the play. In the first Act, Nora is portrayed as the ultimate housewife, completely domesticated and living a life of self-sacrifice for her husband and three young children. Her husband Torvald calls her his “”little lark”” and “”squirrel”” (Act I), which she believes makes her special for him. She truly believes that by allowing her husband to treat her as a ‘doll’ is the only way to sustain his love for her. This is the first deception the basis of Nora and Torvald’s relationship is a lie. Their marriage rests on the illusion that Nora puts forth that she is a helpless woman and he is her savior. However, as the reader comes to realize, Nora is an extremely capable woman who is willing to break social norms takes a loan, borrow money to pay the loan, and even forge her father’s signature. She does this to help her husband, although these actions finally cause her to break the illusion of a doll’s house that she has fought so hard to sustain all her life. Ibsen uses the deception in Nora and Torvald’s relationship to portray the family life in the 19th century where the society was patriarchal and women were forced to make sacrifices for ensuring social acceptability.

Torvald Helmer, Nora’s husband is portrayed as a typical 19th century male. He is the patriarch of the family and considers it his duty and responsibility to provide for his wife and children. He expects Nora to take care of the house and the children. In return, he treats her like a doll. He does not interact with the children and just assumes them to part of Nora’s duties. He is forever pledging his love for Nora and hopes for an opportunity to serve her “”I have often wished that you might be threatened by some great danger, so that I might risk my life’s blood, and everything, for your sake”” (Act III). However, the moment he receives the news of the forgery and the loan, he immediately disowns Nora as his wife and the mother of his children, thus ruining the illusion of strength and chivalry that Nora thought he possessed.

Similar to the Helmers, the characters of Christine Linde, self- centered although widowed and lonely and Nils Krogstad,capable of cruelty while capable of great benevolence for his long-lost love use deception throughout the play.Every character tries hard to gain the trust and approval of others (Hooti and Torkamaneh, 1108), resulting in deceiving both themselves and the others as well. Ibsen manages to show the decitfulness in the character of all humanity through his four principal characters in the play.

Ibsen uses symbolism effectively to convey deception in the play. For example, the Christmas tree symbolizes Nora’s transformation from a doll to a realistic woman. When the tree is first brought into the house, Nora insists on hiding it until it is trimmed and presentable. This symbolizes her need to be perfect. As she begins to realize that it is only a matter of time before Torvald discovers her secret, the tree also begins to wilt, until it is “”stripped of its ornaments, with burned down candle-ends on its dishevelled branches”” (Act II). Another example of symbolism can be seen in the tarantella that Nora performs for the family. The dance is traditionally performed to rid the poison off a tarantula bite and as Nora dances more and more wildly, it is as if she is trying to rid herself of the deception that she has to put up to ensure her husband’s love (Act II).

Readers of A Doll’s House would agree that deception is vital for the success of the play, because without it, there is just a happy couple Nora and Torvald, leading a boring life. Even their happiness would not be guaranteed as Nora would never have deceived her husband and taken the loan, allowing him to display his true self. Christine Linde and Nils Krogstad could have been part of the story but they would not have had the effect they did on the Helmers’ lives. And without the inherent duality in the characters, the use of deception through symbolism would have also not been as effective. The entire story is based on deception and without it, there would be no story.

Deception in A Doll's House. (2019, Feb 21). Retrieved from https://papersowl.com/examples/the-use-of-deception-in-a-dolls-house/