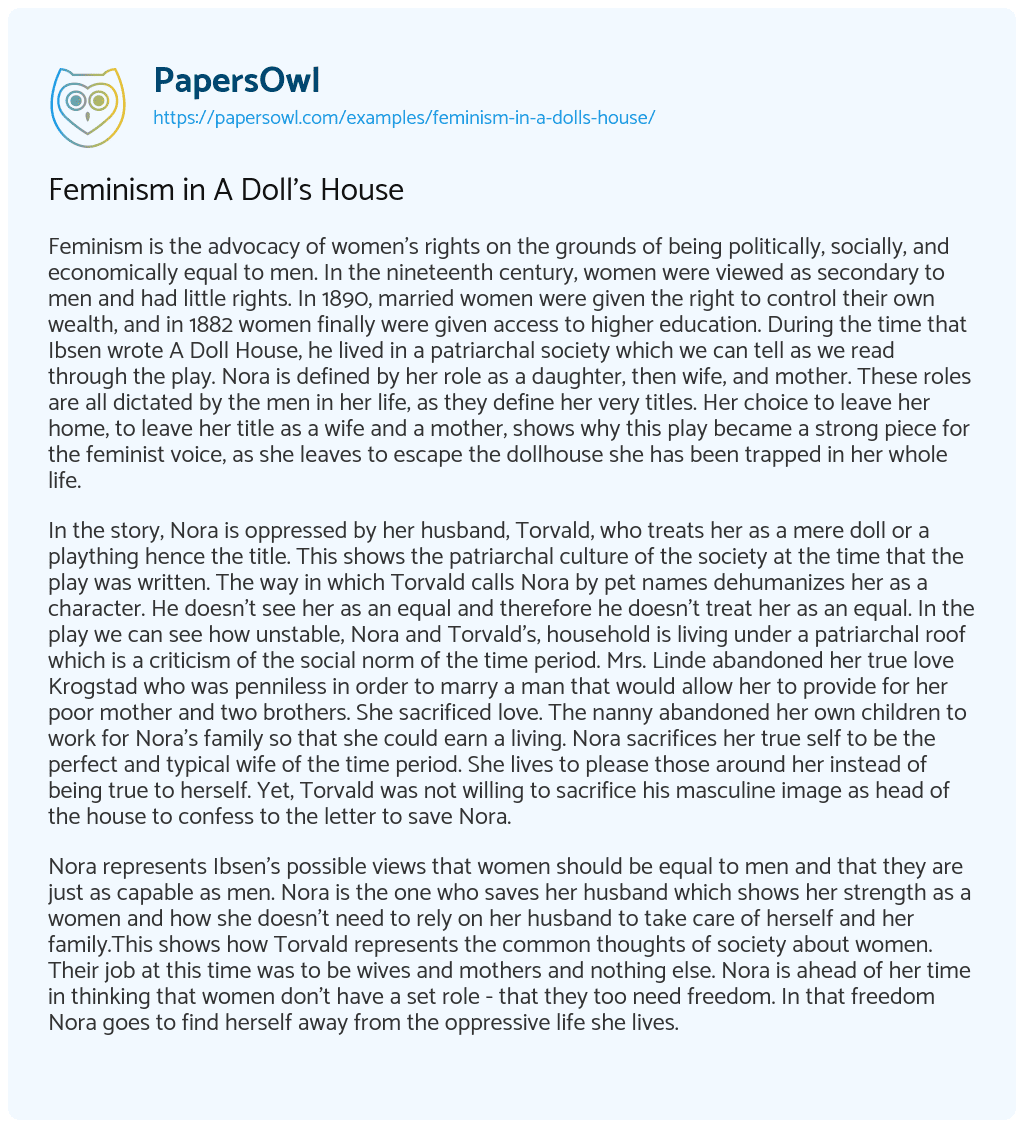 Feminism is the advocacy of women’s rights on the grounds of being politically, socially, and economically equal to men. In the nineteenth century, women were viewed as secondary to men and had little rights. In 1890, married women were given the right to control their own wealth, and in 1882 women finally were given access to higher education. During the time that Ibsen wrote A Doll House, he lived in a patriarchal society which we can tell as we read through the play. Nora is defined by her role as a daughter, then wife, and mother. These roles are all dictated by the men in her life, as they define her very titles. Her choice to leave her home, to leave her title as a wife and a mother, shows why this play became a strong piece for the feminist voice, as she leaves to escape the dollhouse she has been trapped in her whole life.

In the story, Nora is oppressed by her husband, Torvald, who treats her as a mere doll or a plaything hence the title. This shows the patriarchal culture of the society at the time that the play was written. The way in which Torvald calls Nora by pet names dehumanizes her as a character. He doesn’t see her as an equal and therefore he doesn’t treat her as an equal. In the play we can see how unstable, Nora and Torvald’s, household is living under a patriarchal roof which is a criticism of the social norm of the time period. Mrs. Linde abandoned her true love Krogstad who was penniless in order to marry a man that would allow her to provide for her poor mother and two brothers. She sacrificed love. The nanny abandoned her own children to work for Nora’s family so that she could earn a living. Nora sacrifices her true self to be the perfect and typical wife of the time period. She lives to please those around her instead of being true to herself. Yet, Torvald was not willing to sacrifice his masculine image as head of the house to confess to the letter to save Nora.

Nora represents Ibsen’s possible views that women should be equal to men and that they are just as capable as men. Nora is the one who saves her husband which shows her strength as a women and how she doesn’t need to rely on her husband to take care of herself and her family.This shows how Torvald represents the common thoughts of society about women. Their job at this time was to be wives and mothers and nothing else. Nora is ahead of her time in thinking that women don’t have a set role – that they too need freedom. In that freedom Nora goes to find herself away from the oppressive life she lives.

Feminism in A Doll's House. (2019, May 20). Retrieved from https://papersowl.com/examples/feminism-in-a-dolls-house/

“A Doll’s House” as a Modern Tragedy