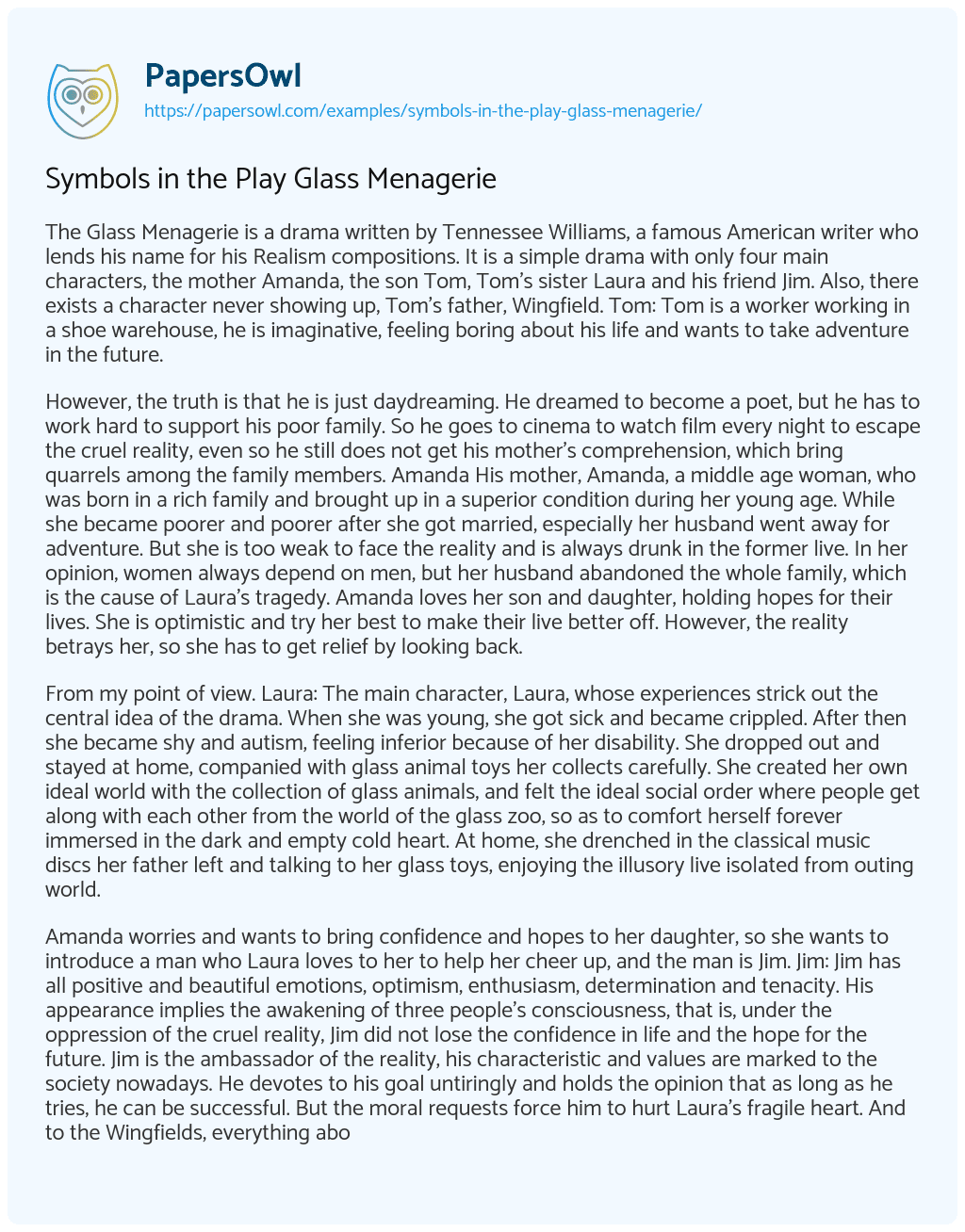 The Glass Menagerie is a drama written by Tennessee Williams, a famous American writer who lends his name for his Realism compositions. It is a simple drama with only four main characters, the mother Amanda, the son Tom, Tom’s sister Laura and his friend Jim. Also, there exists a character never showing up, Tom’s father, Wingfield. Tom: Tom is a worker working in a shoe warehouse, he is imaginative, feeling boring about his life and wants to take adventure in the future.

However, the truth is that he is just daydreaming. He dreamed to become a poet, but he has to work hard to support his poor family. So he goes to cinema to watch film every night to escape the cruel reality, even so he still does not get his mother’s comprehension, which bring quarrels among the family members. Amanda His mother, Amanda, a middle age woman, who was born in a rich family and brought up in a superior condition during her young age. While she became poorer and poorer after she got married, especially her husband went away for adventure. But she is too weak to face the reality and is always drunk in the former live. In her opinion, women always depend on men, but her husband abandoned the whole family, which is the cause of Laura’s tragedy. Amanda loves her son and daughter, holding hopes for their lives. She is optimistic and try her best to make their live better off. However, the reality betrays her, so she has to get relief by looking back.

From my point of view. Laura: The main character, Laura, whose experiences strick out the central idea of the drama. When she was young, she got sick and became crippled. After then she became shy and autism, feeling inferior because of her disability. She dropped out and stayed at home, companied with glass animal toys her collects carefully. She created her own ideal world with the collection of glass animals, and felt the ideal social order where people get along with each other from the world of the glass zoo, so as to comfort herself forever immersed in the dark and empty cold heart. At home, she drenched in the classical music discs her father left and talking to her glass toys, enjoying the illusory live isolated from outing world.

Amanda worries and wants to bring confidence and hopes to her daughter, so she wants to introduce a man who Laura loves to her to help her cheer up, and the man is Jim. Jim: Jim has all positive and beautiful emotions, optimism, enthusiasm, determination and tenacity. His appearance implies the awakening of three people’s consciousness, that is, under the oppression of the cruel reality, Jim did not lose the confidence in life and the hope for the future. Jim is the ambassador of the reality, his characteristic and values are marked to the society nowadays. He devotes to his goal untiringly and holds the opinion that as long as he tries, he can be successful. But the moral requests force him to hurt Laura’s fragile heart. And to the Wingfields, everything about Jim is none of their business. The unicorn is the strangest piece of glass in the zoo of glass, and Laura is as unique and fragile as this glass unicorn.

However, her uniqueness does not conform to the reality of society, which implies that Laura cannot stand in reality; Laura is extremely introverted because of her physical limitations, and her inner isolation makes it almost impossible for her to leave the house. She fainted on the escape ladder when her mother sent her shopping. She was too nervous to open the door when she learned the visitor was a high school favorite. From these things, it can be seen that Laura’s heart is extremely fragile, she cannot communicate with the outside world. The unicorn was Laura’s favorite animal in the glass zoo, but its breaking symbolized the end of her glass world and the end of her hope.

Symbols in the Play Glass Menagerie. (2021, Mar 23). Retrieved from https://papersowl.com/examples/symbols-in-the-play-glass-menagerie/

The Memory Play “The Glass Menagerie” Created by Tennessee Williams